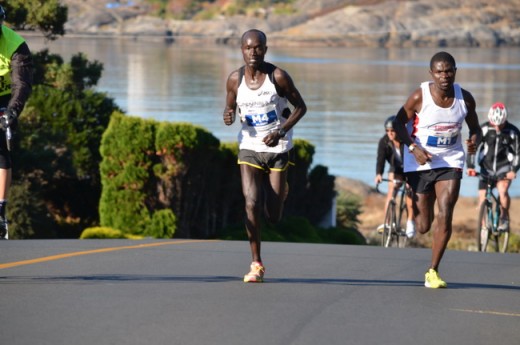 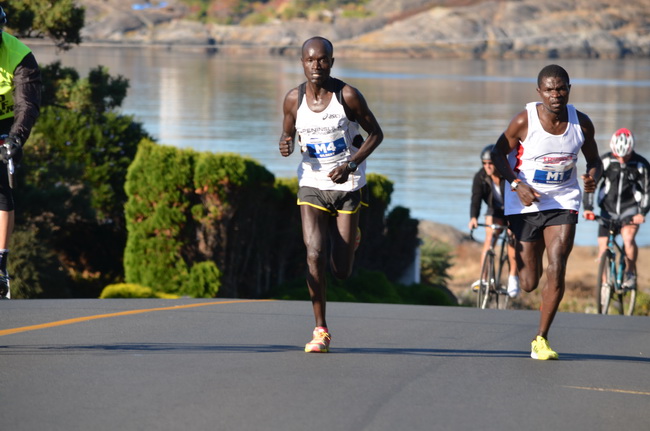 Strong elite fields are taking shape leading up to this Sunday’s 34th running of the GoodLife Fitness Victoria Marathon, Half Marathon and 8k weekend of events.

In terms of international quality entries, leading the way are a couple of athletes who call Victoria home. Hilary Stellingwerff and Geoff Martinson will be competing in the half-marathon, along with fellow Canadian Kelly Wiebe of Swift Current, Saskatchewan. This is Stellingwerff and Wiebe’s debut at the distance. Stellingwerff told Athletics illustrated, “I’m really excited for the challenge of running my first half-marathon on what I now consider home turf. The 2012 London Olympian added, “I decided to run it a little over a month ago and have done a few specific workouts that have been the longest in my life – so regardless of my final time, it’s been great for my body and mind.”

Stellingwerff competes internationally in the 1500m distance; her races are typically done in just over four minutes. Sunday, she likely will be seeking to win in a time around 1:13-high to 1:15-low. She has represented Canada three times at World championships including cross-country, indoor and outdoor track. She made the finals at the 2012 London Olympic Games and owns a personal best time of 4:05.08.

Martinson, a former University of Victoria Vike competed on the international stage for a few years before taking a sabbatical from the professional sport to race locally and start a career in real estate. He did compete at the 2011 IAAF World Track and Field Championships in Daegu, Korea in the 1500 metre event and owns a respectable personal best of 3:37.56. He owns a half-marathon best time of 65:39 and looks to improve on that time, Sunday. “My goal for the half is to improve upon my personal best set at last year’s edition and try to win the race. My fitness is good, though I am definitely in better shape for 10k at the moment. I like to think that my aerobic fitness is at least as good as it was last year in October, but I have also been doing more strength work the past several months compared to last year.”

Wiebe of Swift Current, Saskatchewan ran for the University of Regina Cougars for five years. He was a surprise winner of the 2013 Vancouver Sun Run running to a personal best time of 29:12.3. He also finished in the top four at the 2012 National Cross County Championships in Vancouver, days after winning the Canadian Interuniversity Sports (CIS) National Championships.

Asked about his current fitness level, Wiebe said, “The GoodLife Fitness Victoria Half Marathon will be my debut race at the 21.1km distance. I took some time off running in August, but training since my break has gone well. I believe that after joining Richard Lee’s program, my strength has reached a new level, and I am looking forward to seeing how that translates into a half-marathon.”

Wiebe’s 10k road personal best time indicates that he should be able to finish the half-marathon in approximately 65 minutes. Incidentally, Martinson’s 10k personal best is 30:17, which was run at the Times Colonist 10k in Victoria. The Sun Run is often considered to be a faster course by up to one minute. The race between these two should be close. However; Wiebe added, “I am not putting any expectations on myself leading into the race, but I am looking to put forward a hard, honest effort. In terms of goals, I want to run the first 10 miles (16.1 km) as relaxed as possible, and after that see how much I can make it hurt.”

Although Wiebe defeated Willy Kimosop – a Kenyan-Canadian from Lethbridge, Alberta – at the 2013 Vancouver Sun Run, Kimosop enters the race as the one to beat for Wiebe and Martinson. Kimosop owns a superior 10k personal best time of 29:04 and has run the half marathon as fast as 65:03, which he accomplished at the BMO Vancouver Half Marathon.

Jim Finlayson, twice the Canadian marathon champion and twice competed in the IAAF World Cross Country Championships will suit up and seek the masters (40-plus) age-group win.

Another Victorian, Jon Brown, who is a three-time Olympian and former 10000 metre record holder of Great Britain (before Mo Farah took it), owns the current half-marathon course record which is 62:32, which he accomplished in 2002. In that race he may have run faster yet, as he was running into a large crowd of back-of-thepack marathon runners with three kilometres remaining in the race – adjustments have since been made to completely alleviate this one-time issue.

The GoodLife Fitness Victoria Marathon – although a smaller race by at least 2000 participants – is the marquee event of the weekend and features six Kenyan male athletes who are all seeking to better the current course record of 2:14:33 or at least challenge the first money bonus time, which is 2:16, recently upped from the former 2:18. The record was set in 2011 by Thomas Omwenga. Omwenga is returning Sunday to defend his win from 2012 (2:20) as well as challenge for the record. Omwenga has run 2:14 three times, once each in Victoria, Toronto and Montreal.

Set to challenge Omwenga is a quintet of Kenyans who reside in Canada part time for training purposes. They are Kip Kangogo, Lamech Mosoti, Philip Samoei, Gilbert Kiptoo and Josephat Ongeri. Kangogo has run one marathon and finished in 2:19, he said that he is looking to understand the distance better, to run internationally.

Kiptoo, who finished second in 2012 to Omwenga in the time of 2:27.01, looks to run much better and also compete for the sub-2:16 bonus. He said, “I am fit and hope to run well on race day. We expect a fast race this year and will be on pace right away to aim for a 2:16 finish time or better.”

Samoei has finished the GoodLife Fitness Victoria Marathon three times winning in 2012 in 2:23 and finishing second and fourth two other years both in 2:25.

The course record stood for over twenty years and was held by Surrey’s Tom Howard at 2:18:49 before three-time winner Steve Osaduik 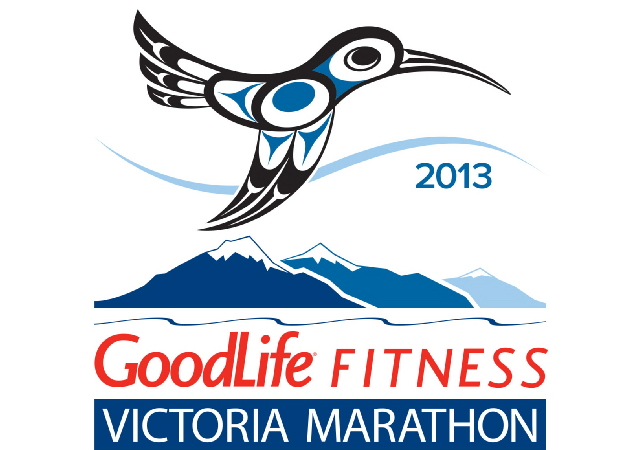 Catrin Jones is the favourite to win the GoodLife Fitness Victoria Marathon. She competed for Canada at the 2013 Francophone Games in the 10000 metre distance.  Jones owns personal bests of 34:50 for 10k, 1:17 for the half-marathon and 2:44 for the marathon, all three of which were achieved during the 2013 season. She wouldn’t share her goal finish time however; her personal bests at the 10k and half-marathon point to a 2:41 marathon, with some helpful weather and smart pacing perhaps she will seek sub-2:40. “To be honest, I am going into this race with an open mind. I do have goal times, but ultimately, I want to enjoy myself out there on Sunday. Start with a smile, end with a smile, it’s as simple as that. If I run well, find my rhythm, and have a solid second half, I think I can cross the line in a time that will satisfy me and reflect my current fitness. Training has been good these past few weeks after my return from the Francophone Games where I ran a not-so-great 10,000m event, followed by a very strong and extremely fun trail race in the mountains less than 40 hours later!”

Jones may have an intangible going for her as she said, “I love this course and this event, and a pressure-free race is all I ask for,”

Also in the contenders list are Katherine Moore of Vancouver, who has run as fast as 2:47 as well as American, Renee Gordon, who has finished under three hours.

Former University of Victoria Vike Nick Walker will toe-the-line at the GoodLife Fitness Victoria 8k race. He owns an 8k personal best time of 26:15 and a 10k personal best of 31:16. Currently he appears to be the favourite however; hot on his heels will be two local masters in two-time Olympian Bruce Deacon, a one-time winner of the Victoria Marathon, where he finished in 2:20. He has twice run as fast as 2:13 for the distance and has finished under 2:20 over 20 times in his career. His 2:13 bests are faster than anyone in the entire event this weekend. Former University of Victoria Vike Craig Odermatt will compete with Deacon for the masters win.

In the women’s race Vancouver’s Rachel Cliff will be seeking the win. She has competed on the world stage recently in the IAAF World Cross Country Championships, as well as the NACAC Cross Country Championships, where she finished a close second overall to help team Canada to a team win in Jamaica. She owns a 5000 metre personal best of 16:07 and a 10000 metre personal best of 35:16. Vancouver’s Gillian Gook may provide excellent competition for Cliff as she owns a 10k personal best time of 35:21. Former University of Victoria Vike Brittany Therrien rounds out the field, she said, “I’m not quite sure what to expect from this weekend as I am still adjusting to a higher volume regime and training on my own now that I am finished university. I have had some really good workouts though, so hopefully I can put it all together on race day.”

The GoodLife Fitness Victoria Marathon is a B.A.A Boston Marathon certified qualifier race. The event will have over 12000 participants. As of Monday, October 13th there are 2,026 registered for the marathon, 5,277 who signed up for the half-marathon and the 8k has a field of 2,562.