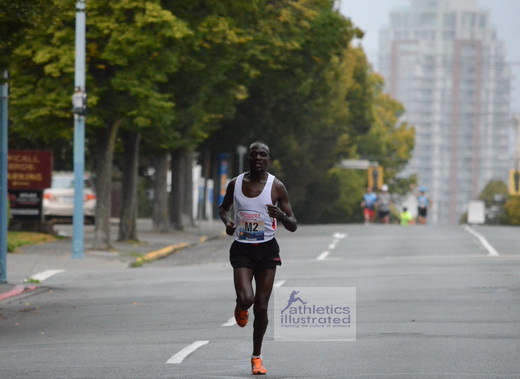 The 2014 edition of the GoodLife Fitness Victoria Marathon took place under near perfect marathon running conditions with filtered sun, a slight breeze and cool-to-mild temperatures. The 35th annual marathon was won by Kenyan Daniel Kipkoech in the time of 2:20:04 and Canada’s Lioudmila Kortchaguina, who finished in the time of 2:41:34. She was also the first master finisher.

The men’s marathon race was over very early as Kipkoech dashed to a sizeable lead on the field off the start. At no point in the race was the lead challenged, as at the turnaround point on Exeter Road, it was roughly calculated that Omwenga was behind Kipkoech by at least five minutes. Omwenga, a two-time winner of the event with a 2:10:44 personal best and a GoodLife event best of 2:14:31, finished over seven minutes back in the time of 2:27:09. Third place finisher was Vancouver’s Oliver Utting, who was also the first master, who finished in the time of 2:29:02. Utting, fellow master Graeme Wilson and training partner Ed McCarthy had a much more exciting race for third position. Utting told Athletics Illustrated, “The three of us were aiming for a 1:14 half-way split and were a little slow at about 1:15, but the goal was to run together to at least 35K, then just see what happens.”

Utting prevailed over Wilson, who finished second master and fifth overall in the time of 2:30:33, while the younger McCarthy, who celebrates his 30th birthday Wednesday finished fourth overall in 2:29:29. Utting was the first British Columbian and first Canadian.

In the women’s race, it was upstart American Eva Vail from Portland, Oregon who surprised many with her second place finish and 2:45:54 finish time. GoodLife Victoria was her debut at the distance and she was hoping to finish just under the 2:50 benchmark. First overall and first master was Canadian Lioudmila Kortchaguina in the time of 2:41:39. Kortchaguina is 43 years of age. A please Vail told Athletics Illustrated, “I am surprised with my time, I really like this event and had a good time out there today. I think maybe the people cheering along the course helped me go faster than I was prepared to do.”

Kortchaguina told Athletics Illustrated, “my masters-age personal best is 2:33:11, so I was hoping for a new best, but at the half-way, I just starting hoping for sub-2:40.” The 43-year-old former Russian owns a lifetime personal best of 2:29:42 from the 2006 running of the Ottawa Marathon.

Third place finisher was Victoria resident Catrin Jones, who was using the race as an indicator for her upcoming IAU World 50K Trophy championship event that will take place on November 21st in Doha, Qatar, she said, “I am pleased with the result considering I haven’t done very much training at all, as I am just now healthy after being injured through most of 2014.” Jones, who is known more for her trail and mountain running finished in the time of 2:46:51, approximately five minutes off her personal best at the distance.

Suzanne Evans, a previous winner finished just under the three-hour barrier, fourth overall and second master in the time of 2:59:53.