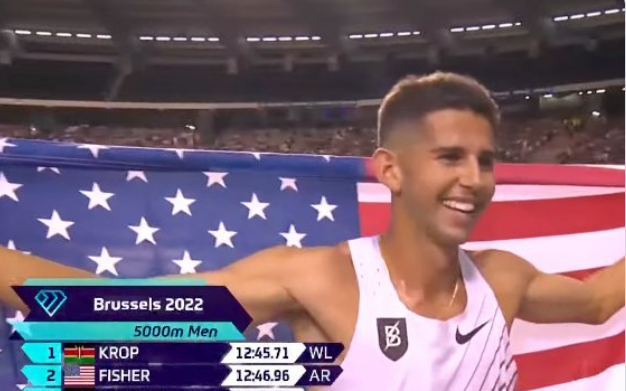 Grant Fisher is one of America’s all-time great distance runners and is on his way to becoming perhaps the greatest. First, however, he needs to win a major championship. He had three opportunities to do so in 2022 and came close. Prognosticators suggest it may be the surging that takes place in global championships that Fisher needs to deal with, others, the killer instinct.

As an NCAA and national champion and multi-time North American record holder, it is unlikely that he lacks the killer instinct.

The performance is a North American record surpassing Canadian Mo Ahmed‘s 12:47.20 performance from July 2020 in Portland, Oregon. Fisher now lives in Portland and trains at the Bowerman Track Club under coach Jerry Schumacher, as does Ahmed.

Ahmed’s time remains the Canadian record even though Fisher was born in Calgary, Alberta. He was raised in Grand Blanc, Michigan. Fisher attended Stanford University and went on to become a 12-time All-American and two-time NCAA champion, once in cross-country as well as the 5000m event, respectively.

Demonstrating range Fisher ran a 1500m personal best in 2022 stopping the clock at 3:35.53 in Portland on June 11. According to the World Athletics points performance rating system his best outdoor performance is in the 10,000m at 1268 points.

There is no doubt that he has the ability to medal at a major championship although he finished fifth at the Tokyo Olympic Games clocking a 27:46.39 performance. At the Eugene World Athletics Championships, he finished one position higher in the time of 27:28.14. Fisher also ran the 5000m event in Eugene clocking 13:11.65 finishing sixth — so close.

When Fisher took down the 5000m record, he improved upon Bernard Lagat‘s time of 12:53.60. Lagat became an American citizen after attending university in the US, however, was born and raised in Kenya. During Fisher’s record run at the Memorial Van Damme Diamond League meet, he finished second to Kenyan Jacob Krop, who clocked a 12:45.71. Krop had taken silver at the Eugene World Championships meet. The 21-year-old dropped the pace over the final lap even though Fisher ran a stunning final 400m in sub-58 seconds.

Apparently Fisher will have to work on his top-end speed while racing the business end of a distance race.