The Canadian Interuniversity Sport (CIS) defending national champions and current number one ranked team in the country (men and women), the University of Guelph Gryphons swept the prestigious 12th Annual Greater Louisville Cross Country Classic, Saturday, October 5th in Louisville, Kentucky. The Classic is the first ever NCAA division one win for the Gryphons.

“Given everything the University of Guelph men’s and women’s cross country teams have accomplished, they achieved something they have never achieved before, an NCAA division one win” said coach Chris Moulton.

Over the past several years there have been many near misses for the Gryphons, including a runner-up finish at the Paul Short Invitational meet and a podium finish at the Roy Griak Invitational as well as the Bill Dellinger Invitational, but never has the school managed to take home the first overall trophy. Saturday, the Gryphons swept the team titles in Louisville, on the strength of four men and four women each to finish in the top 15.

The Gryphons for the first time were running with nearly a full team, missing only Chris Dulhanty who was out with illness, and the strength showed as their top four runners were separated by a scant 11 seconds. In a change of order, that typically sees the women’s race lead off a meet, this time it was the men’s. The Gryphon men quickly established a strong presence in the large lead pack.

“This race marked Woodfine’s Gryphon debut, the third year student has focused on triathlon training for the past two fall seasons but his race Saturday showed it was definitely worth the wait,” said Moulton.

Following the Gryphons’ first four finishers, there was a 30 second gap to fifth runner Andrew Nixon. “Nixon continues to round into form after an early season Achilles injury; with five weeks until the CIS Championships, expect to see him up with the front Gryphon pack come championship time,” added Moulton.  Nixon was quickly followed in by Christian Gravel, who was seven seconds behind and Steve Holmes four seconds back of Gravel.  Overall, the Gryphon men placed all seven of their scoring run 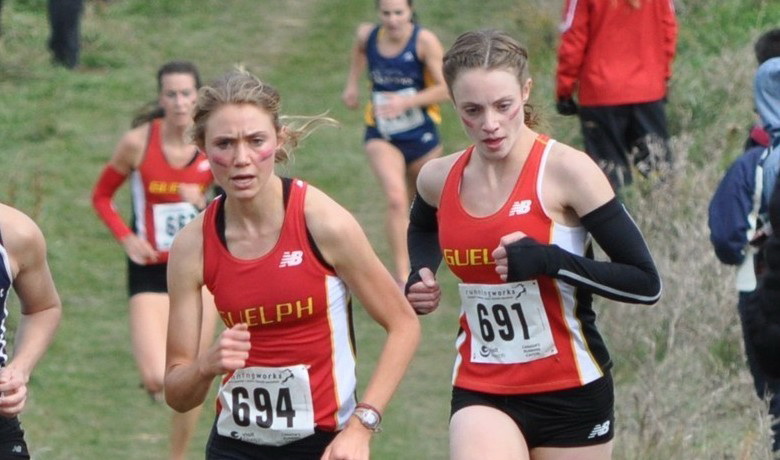 ners in the top 50 in the field of more than 250 competitors.

With the men’s victory in hand, the women set off with the goal of completing the sweep.  Like the men, the Gryphon women used a strong front pack to secure the team victory. Genevieve Lalonde led the team with a fourth place finish; right behind her was Madeline Yungblut in fifth position, while making her season debut.  A mere seven and ten seconds back of Yungblut were Carise Thompson placing 11th and Heather Petrick in 13th; Katrina Allison rounded out the Gryphons’ scoring five in 19th overall 11 seconds back of Petrick. Similar to last week, the Gryphons had a very small time spread from their first to fifth runner of only 28 seconds.  With Joanna Brown and Amelie Kretz not competing this weekend the Gryphons appear to have an absolutely stellar top seven.

The men’s course is 8000 metres in length, while the women’s is 5000 metres. The Classic took place at the E.P. ‘Tom’ Sawyer State Park in Louisville, Kentucky.