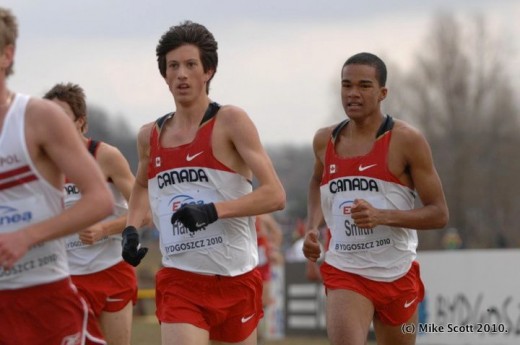 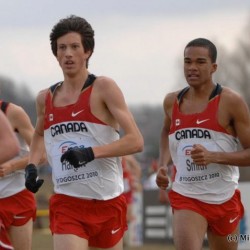 Dylan Haight is a rising star who is based in Victoria, BC and attending Oak Bay High School. He is helping to keep the successful history of Oak Bay’s athletics program in a winning state. Coached by Keith Butler, Haight has developed into one of Canada’s top junior runners. He recently competed on the world stage at the IAAF World Cross-Country Championships in Poland, as a junior.

BC Athletics, the provincial arm of Athletics Canada recognized Haight as the 2009 junior cross-country runner of the year.

Christopher Kelsall: Now that you have raced at World’s, finishing respectively in the middle of the field – did the intensity at Worlds match your expectations?

Dylan Haight: Worlds was definitely a different atmosphere than I have raced in before. I actually found that I was more relaxed going into this race than I was Nationals because I knew that there was nothing left to qualify for and all I could do was get out there and race as well as I could on the day.

CK: Did the relaxed attitude benefit you once the gun sounded?

DH: I think it did. During the first kilometer it was difficult to hold back and let so many guys go by me, but I was just able to keep smooth and focus on what the race plan was.

CK: Can you take us through the race? Was the pace faster than you expected off the start?

DH: The pace was pretty fast from the gun, but we knew that a lot of the people going by in the first 2k would start to come back to us later in the race. Right from the start I was running with Daryl (Smith) and we just worked our way through the pack. By about 4k we had moved up from almost 100th to around 80th and joined the rest of the team. Over the last 4k we just tried to keep together and continue to work our way through the pack. It was great having the other guys around during the race because I was able to keep relaxed knowing that I have raced these guys before and if they are in this position I should be too. The finish between us pretty much came down to a kick and we all finished within 10 seconds of each other.

CK: Sounds like you guys were fairly well prepared if you were able to kick at the end after a fast start in an international race. Can you tell me about a specific change in your training gearing you towards World Juniors?

DH: My training was pretty standard after nationals. I was doing some track workouts but also balanced it out with some longer interval days on the grass. I did that until about a month out from worlds when I injured my knee. For 2 weeks all I did were short recovery runs and some cross training to try and keep my fitness up. After NACAC’s, I still was only doing easy runs for about a week. With about 2 weeks to go I was able to do workouts (with a lot of help from Advil) but would basically have to spend the day after recovering. When we got to Poland my knee was starting to feel better and with 3 days until the race I was able to workout relatively pain free. So my training was really different than I had hoped it would be but I was able to get my key workout in for 2 weeks so I was able to stay in fairly good shape.

CK: How is the knee now?

DH: It’s pretty much healed up now. Should be completely gone within a few days.

CK: What are your thoughts on the rhetoric about World Cross-Country Championships dying in respect to there being primarily East Africans in all the top spots and even the team scores were lower from western countries?

DH: As far as most non-runners can see, World Coss-Country Championships are dying. We do not have athletes in medal positions or teams that are able to compete with those sent by the African countries. But seeing results like Simon’s (Bairu) 13th place in the senior men’s race or the American senior women’s team bronze medal shows that it is possible to compete with the athletes from African countries. The biggest issue in keeping World Cross-Country Championships alive will be if the countries continue to fund these teams and athletes. If somebody has to work a full- time job as well as try to train to be one of the best in the world, it will likely not happen, no matter how talented he/she is.

CK: The funding, depending on who you talk to is not going to grow a whole lot from where it is now. Working would likely still be a requirement. Interesting that Brett Gotcher ran a 2:10 marathon while working, almost full-time. Do you think there is a collective mind-set that because hockey and triathlon for example are ‘moneyed sports’ that perhaps running needs to be funded too?

DH: Brett Gotcher is the perfect example of how it is possible to rival the times of the Kenyans and Ethiopians. Hopefully he is given the support needed to continue his success. I think that no matter what sport you are in you believe that it is underfunded because it is expensive to train and compete at a high level. So yes I think that runners all believe we should be funded like hockey players, but until they reach the NHL they are probably just as broke as we are. It’s once they reach the NHL that the pay difference is noticeable.

CK: Jumping from Oak Bay High School to the University of Victoria – what is your impression of the difference between High School and University level racing and training?

DH: I actually am not in UVic this year because of some issues with my grades in my final year of high school. Turns out that homework is important, but I have been training with the Vikes for a couple of years now so as far as workouts go, I have not had any problems adjusting. It also helps that Keith (Butler) has been my coach since grade 10, so he knows what works and what doesn’t in my training.

CK: Craig Odermatt (Odie) of Pacific Athletics refers to you as a rising star. At 40 he is exactly as fast as he was when he was your age. Ironically at the Black Press 5000 he handed you a little, shall we say, Odie wisdom. He is running well. Are you ready to give it back to him in the 5000 this summer at Oak Bay Track?

DH: It is great to see Craig pulling out these big times when many people start to slow down. It shows that it is still possible to run well, into your 40’s. That being said, I would like another shot at him in the 5000 this summer.

CK: Best quotable line from a movie, ever?

DH: Basically I only run, but I like to watch cycling when its on. When the tour comes on, our house basically shuts down.

CK: Are you watching the Discovery Channel at 5 AM or do you wait until 11 PM?

DH: Canucks, but being from Ontario, I still have to have some support for Toronto.

CK: I’ve never heard of that – cheering for both Toronto and Vancouver – odd. You are from near Guelph, yes?

DH: I lived in Woodstock, which is about 30 minutes south of Guelph and made the move out west in 2006.

DH: Running a faster 800 than I am now but that’s the only thing I know for sure.

CK: Which do you prefer, cross or outdoor track?

CK: Clearly you haven’t mud-wrestled with Andy Kaufman. How do you feel about indoors and road racing?

DH: I haven’t done much indoors since my Ontario days, but I never enjoyed it as much as outdoors. I enjoy road racing, especially living in Victoria where there are so many fast guys who compete in these races. It’s humbling when I am out there getting beaten by masters runners who I thought, based on age, I should have no problem beating.

CK: Was your 50 min road 10k in grade 7 a defining moment in your interest in running?

DH: Absolutely. I had always run track and cross-country in school, but never finished much higher than mid-pack in finals races. When I ran the 10k and did fairly well Sheilagh Robinson, my elementary school coach, suggested that I join our local track club. The training made a huge difference and the next year I won our elementary school finals. Had I not run that race I would probably not be running today.