In this age of highly acute environmental consciousness, I have become hyper-aware of what I throw out and what I recycle. Sometimes while performing this household duty I get into an argument with myself:

Me thinking: Should I or should I not dump 20 liters of hot tap water into this plastic peanut butter jar to clean it so the plastic can be recycled?

Response Yes, because the sea-life (where my tap water goes) would like to feed on hydrogenated oils.

Or: Should I just chuck it in with the waste and let the plastic (over the next 100 million years) re-degenerate itself back into oil? And the peanut butter feed another loud seagull for a day.

This sometimes makes for a difficult decision. As I ponder this, I think of the many items I throw out and the many items I recycle, including hair. How much hair have I vacuumed up this week? And why does it shoot out the vent; sometimes clinging to the filter like little hair amoebas in an ocean current?

Anyway, changing gear rings for a moment, sometimes driving along in my large, gas-consuming truck, I find it difficult to tell if a passing road cyclist is any good. It is very easy to tell if a runner is a good runner, but a cyclist sometimes can fool you. I often see the pretenders and the pros riding up and down the highway with their brilliant gear. From knee to neck and even sometimes on the helmet they are covered in logos, which makes them appear as a serious professional or alternatively, a moving target.

One thing they all have in common is hair, or lack of it. For some reason only known to wax manufacturers and to cyclists, they all need to remove their body hair. This trade secret of removing body hair has transcended the sport now, by way of triathlon. Triathletes are cyclists too, so therefore they are in on the secret about hair removal. Now because triathletes also swim and run in different circles (literally and figuratively) swimmers and runners are now removing their body hair too. As do almost all women of course.

100 million cyclists, swimmers, runners and triathletes (and rowers, runners and posers) x on average 36, 000 hairs per year x 1/1000th of an ounce per hair totals 60 billion tonnes of hair. That’s a lot of hair going to the landfill.

Now saying that, some of my running friends are well aware that I use duct tape for all that ailes. I use it to tape twisted ankles, cover split callouses and to cover the nipples during longer runs, so I don’t turn into a bloody squirt gun or worse experience stinging shower sensation.

Now I am a reasonably hairy fella, but not completely covered, like it wouldn’t creep out the top of turtleneck sweaters or anything.

This past summer, when things got out of hand, I left a larger piece of duct tape on the nips — a little longer than I should have. Pulling it off hurt like hell, like 1000 bee stings. This left behind a bald batch, which I ignored.

The next day whilst shaving (the face) a refracting flash of light blinded me. I thought I had been tazered by the RCMP; I was in a Parkinson’s-like stagger when I spotted the eclipse, it was the patch on my chest as bald as a newborn baby’s bum.

Now I have always thought that for me, removing body hair was unnecessary, being not too-too hairy, but the patch looked like Steve Carrel’s patch in the movie, 40 Year Old Virgin. Which is just plain wrong, no matter how you look at it.

So I retrieved said role of duct tape with the express mumbled intent of thinning things out, to create a synergy in the state between shining bald patch and the rest of my dusted frontage. It all started with a few rips here and a few rips there. Each new rip leaving fragments of glue from the tape on me, which held tangles of hair. Thus I figured it wasn’t really working, when actually it was. At this time, I was working out (in my little brain) how to remove the glue and hair chunks safely and in an environmentally friendly manner. In a moment of perplexing enlightenment I pronounce to myself — Aha! I will just use more duct tape, but faster.

So this goes on and now I am mostly bald on my stomach, with bare patches on the chest. I look in the mirror resigned, shoulders sagging…thinking…

Now I don’t know anything about wax, but the box read:

How hard could that be?

Gazing, slack-jawed into the mirror, I spy a waxy tangle of hair, duct tape glue and thread and pink skin, quickly turning a neon shade of lobster. I was a mess. The white tiled floor resembled a black widow spider battle field, it is Arachnageddon down there.

There was no indication of how long to leave the wax on for or how thick to spread it. So I spread it on thick like peanut butter and left it on for a good 10 minutes.

Pulling mounds of wax off my trunk, I pull the skin away far enough that I could have made a tent awning and install it for half the price of the competition, providing a bumper-to-bumper lifetime warranty. Heck, after all, I could always grow more; skin like hair is a renewable resource.

After about 30 minutes of pulling and gumming the finger nails with wax and tape, I look into the mirror again and hung my head. At this point I have small, rogue populations of hair growing in a vast red desert.

Time to call in the artillery – shaving cream and disposable razor.

Psssssssssssssst….I spread the cold shaving gel on, it feels as though I am spreading battery acid over an infection with an alcohol soaked bayonet. I am at war after all….

Analyzing the carnage, I am a vertical, bald lobster with little red planets orbiting a pink solar system. I have a complete galaxy carved into my chest. I think I spot planet Mole.

I HAVE HAIR ON MY BACK!

…into a cold shower…

Putting on my shorts I go for an eight mile run sporting a poly-cotton shirt, which causes enough scratch and sting and burn to induce sweating in itself, never mind the summer’s heat. The shirt sticks to my planetary network like glue. I might as well have set myself alight. Flames would be a nice diversion.

If I had either lived with my flashing, bald patch or have been more environmentally enlightened, this episode would have been completely avoidable and deemed totally unnecessary. Whatsmore, I would have been doing my part, saving the landfill from unnecessary waste. 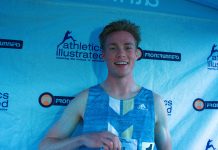 Athletics Canada’s National Label Program, is a great start but is it enough?