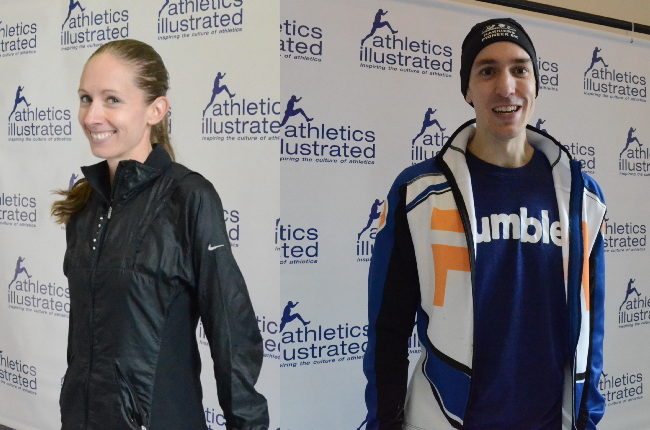 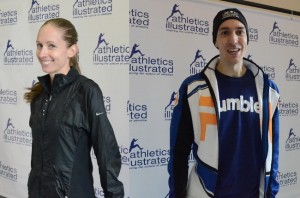 The defending champions of the Harrier’s Pioneer 8k road race, Victoria’s Geoff Martinson and Vancouver’s Natasha Wodak were all set to defend their 2013 titles on Sunday, January 12th however; two athletes had other plans. Vancouver’s Rob Watson and Erin Burrett of Nanaimo showed up to challenge for the win. Under mild temperatures with a light breeze, 625 runners took in the annual first race of the new year, as well as the first race of both the Frontrunners Island Race Series and the BC Timex Race Series. The Pioneer 8k is also the provincial road championships for the distance.

Martinson won finishing in 23:41, eight seconds faster than his win from 2013, “I didn’t think I was in better shape than last year, so it was a nice surprise,” said Martinson. Rob Watson, who was voted Canada’s most valuable runner for 2013, having raced four marathons including one in a personal best time of 2:13:29 and competed in the IAAF World Track and Field Championships, took the field out with a very fast first two kilometres, splitting the first (albeit gently downhill) km in 2:48. He held that pace until the three km point, where a 700m uphill begins. Martinson wisely held back. At the half-way point, while leading the race Watson passed through with 11:43 showing on the clock; and Martinson closing in.

Wodak said before the race, “I have been running higher mileage and don’t expect to be anywhere near last year,” where she broke the Canadian 8k record with a stunning sixth over-all finish in 25:28 – the highest performance in series history. Burrett and Wodak worked together for most of the race however, it was the upstart Burrett who ran to a fantastic new personal best time of 27:13, just over 90 seconds better than her 2013 edition of the race. “It was a big personal best, but I also split sub-28 minutes for 8k in the 2013 Vancouver Sun Run, so I knew I would run well,” said Burrett, who is coming off of a 164 kilometre week (previous week).

Wodak trains with the BC Endurance Project headed by Coach Richard Lee. Teammates, Dayna Pidhoresky and Sabrina Wilkie also raced. Pidhoresky, who has unofficially run the fastest half-marathon in Canadian history, a 1:11:46, is coming back from two years of injury, “I am happy with the race, as it has been awhile since I have been able to train and race consistently,” said Pidhoresky, who was just nipped at the line by master Lucy Smith. Smith is a 19-time Canadian champion. Wilkie, who runs for the Point Grey Track Club as well as BCEP and is also, coached by Lee, finished third in 27:57, a 16 second improvement over her 2013 performance of 28:13.

At the front of the pack, Watson turned at the 5k marker to see Martinson bearing down on him, within 400m, the two were running together. At just over the 6k marker there is a turnaround, which includes a total of three turns within 200m. At this point Martinson left Watson for good and held on for the win. Australia’s Adam Byles finished third in 24:40, while Kevin Friesen and Theo Hunt rounded out the top-five places.

The top male master was Jim Finlayson, a two-time Canadian marathon champion and two-time IAAF World Cross Country Championships competitor. He bettered two-time Olympian Bruce Deacon, the two finished in 25:17 and 25:50, respectively. Deacon was tripped twice during the race. Mark Bennett was third master and first over 50-years of age.