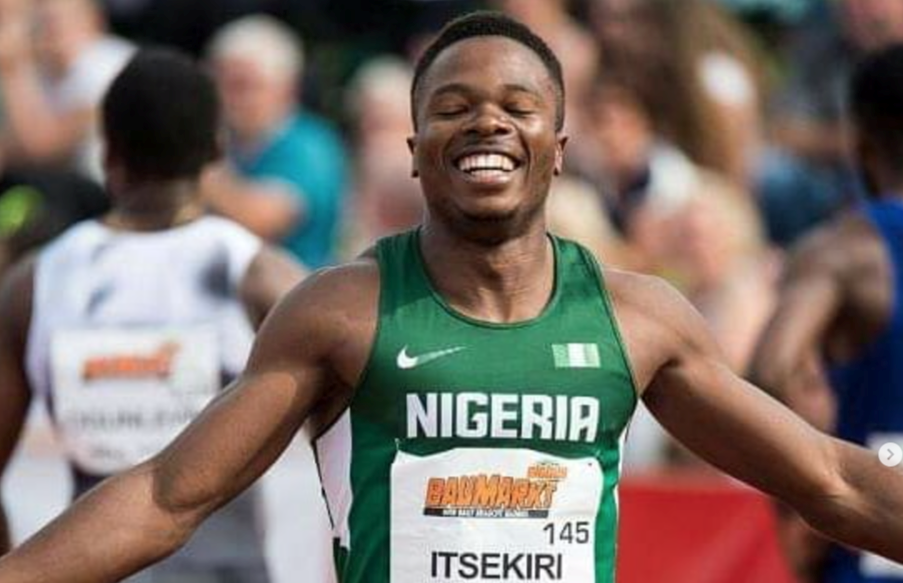 Vancouver’s (Burnaby) Harry Jerome Track Classic and the Victoria Track Classic at the University of Victoria are on again. They are part of the new National Track and Field Tour, an Athletics Canada initiative. The meets promise to be exciting for fans as they are excellent opportunities for athletes to compete in the same time zone as this summer’s Eugene World Athletics Championships.

The Nigerian Olympic sprinter and bronze medallist from the African Games, is committed to the two meets happening June 14 at Swangard Stadium and June 18 at Centennial Stadium in Victoria.

The 100m and 200m specialist has personal bests of 10.02 and 20.53 as he represented Nigeria at the 2019 World Championships in Doha and the Tokyo Olympic Games. He will not only want to get himself into top form for Eugene, but as any world-class sprinter will be seeking sub-10-seconds over the 100m sprint.

Itsekiri or “Dushos,” won the bronze medal in the 100m and silver medal in the 4x100m relay at the 2019 African Games in Rabat, Morocco. Dushos was edged by Nigerian teammate, Raymond Ekevwo and Arthur Cisse of the Ivory Coast in a photo finish in the 100m.

He was also part of the silver-medal winning team in the 4 x 100m relay at the 2019 All African Games and is a three-time national champion.

The 24-year-old Olympian completed his undergraduate degree in engineering in Nigeria and now is doing his master’s degree at the University of Regina in Saskatchewan. Cougars track & field head coach Wade Huber said. “He has competed at the highest level in our sport and it’s incredibly exciting that he’ll bring all of that experience to our program.”

Not surprisingly, he dominated the USport sprint (indoor) season this winter winning both the Canada West and National Championships with a best of 6.63 seconds for the 60m.

Meet directors, Nigel Hole of the Harry Jerome event and Keith Butler expect to confirm a strong field of sprinters in the coming weeks to make for an exciting 100m race. The Jerome meet record of 9.99 seconds was set in 1997 by Canada’s Olympic Champion and World record holder, Donovan Bailey. Andre de Grasse has competed at Jerome as has many other top Canadian talents. This summer will be no exception for both meets.

Both the Harry Jerome Track Classic and the Victoria Track Classic have a long history of providing world-class competition. For example, John Walker of New Zealand, the first athlete under 3:50 in the mile, with the most sub-4-minute miles ran his first 3-something in Victoria in 1973. Diane Cummins, the former national record holder in the 800m, and Melissa Bishop Nriagu, the current national record holder in the 800m have raced the two meets many times.

Watch Athletics Illustrated for updates on the top-level talent committing to both meets.

About the National Track Tour

Athletics Canada, working in collaboration with World Athletics and NACAC, has recently included a number of Canadian meets into the World Athletics Continental Tour’s Silver, Bronze, and Challenger Series which, will collectively feature a total prize purse of $400,000 for competing athletes.

The purpose of the Tour, said Athletics Canada Director of Domestic Programs and Safe Sport Chris Winter, is to provide meaningful competition opportunities for athletes at home, to host events whereby Canadian athletes can earn valuable World Ranking points, and to help develop athletes for future National Team representation. The Tour is scheduled to begin on May 14, and is expected to run until the 2022 World Athletics Championship in Oregon in mid-July.

“Building off the success of the 2021 Tokyo Qualifying Series, which helped provide important competitive opportunities to our Canadian Athletes during the pandemic, I am thrilled to announce The 2022 National Track & Field Tour,” said Winter.