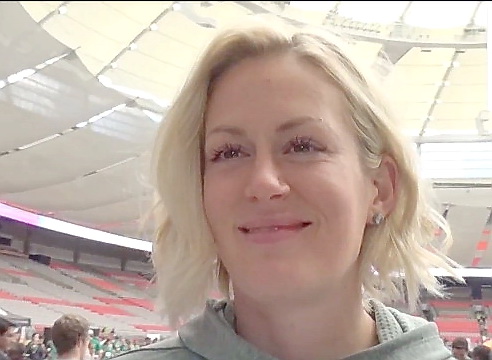 Liz Gleadle will be 31 on her next birthday and has been throwing the javelin for nearly half her life. It’s also been four years since she heaved her personal best of 64.83 metres and her body continues to betray her at times with an assortment of niggling injuries.

“I’ve been a human band-aid for a long time,” she jokes.

But the eight-time Canadian champion and two-time Olympian isn’t done chasing the dream.

She was a disappointing 12th (2012 Games at London) and 16th (2016 Games at Rio de Janeiro) ) with throws that fell two metres short of season bests. Yet her passion for the most spectacular of the throwing disciplines is as strong as it has ever been.

So, after all these years, all the throws, the endless tinkering with technique and training regimens, what keeps her motivated?

“I just feel like I haven’t reached my potential,” the gregarious, six-foot-one Vancouverite and self-confessed Type A personality said in a recent interview.

She’s thrown PBs in practice and in warmups at IAAF Diamond League events. But those don’t count, except to reinforce the belief that a dynamic throw at the right time is still possible.

“For the past three years, I’ve just had some injury or major thing going on in my life that hasn’t allowed me to have continuity in training. It’s part of life. It’s not how do you handle adversity when you’re injured or there’s family stuff going on. We all have adversity. It’s just about how do we choose our own path.

“I do like a challenge. I suppose I could go do a new challenge, but I feel I haven’t reached my peak yet. I haven’t been able to give it a fair shot with a stable environment and cut out all the little things that might distract or hurt my performance.”

Gleadle, who will be one of the feature local athletes at the Vancouver Sun Harry Jerome Track Classic on June 20 at Swangard Stadium in Burnaby, opened this season with a throw of 62,83 metres on March 30 at the UBC Open. It was her best throw in two years, likely, she says, because the stakes were low and she was relaxed.

After a half dozen years in Lethbridge, Alta., with long-time Canadian throws coach Larry Steinke, Gleadle relocated back to Vancouver at the end of 2017, hooking up with the Vancouver Thunderbirds and coach Laurier Primeau. She says it wasn’t an easy decision and it wasn’t a case of one option being better than another.

“It was just a different option,” she says, although she concedes that being back home and close to her physiotherapists was a factor.

“I always know my body better than anybody else. You know in your bones you need something different. I’ve only got a couple of years left, I’d be foolish if I didn’t listen to myself. I’ve got so many years of throwing, a kinesiology degree. I have a great knowledge base.”

She and Primeau have developed a good rapport on adopting, adapting or changing completely his training suggestions. Primeau believes Gleadle is poised to throw a PB at some point this season, perhaps at the IAAF world championships in Doha, Qatar, in October.

“To open (in March) with a throw two metres off her lifetime best, I would say absolutely,” said Primeau. “She takes care of her body better than she ever has. You get to understand your body better as you mature. That’s been a big part of it.”

Gleadle calls her current training “very much a team environment. There’s lots of input, but I get to manage the program. I’ve really grown to respect my own opinions and learned when to rely on other people. It’s been very hard for me, but it’s all part of a general growth and learning.”

She says video analysis of her technique and understanding how to create conditions conducive to big throws has convinced her that hitting 67-68 metres is a “very doable thing.

“People shorter and weaker than me are throwing further than me. It’s about knowing that if I put in this work, it is going to be valuable. And pyschologically I’m getting there, understanding that I deserve to be part of (the elite) group, that I can absolutely do this on demand.”

After an injury-plagued summer in 2018 that included a split with her partner of 3 1-2 years, Gleadle took three full months away from the sport. She spent some time camping and hanging out with friends and eschewing any kind of schedule. It’s clear her emotional well-being is better.

“I love track and field so much,” she says, adding that if she could get that elusive medal at the 2020 Olympics she’d likely “do a lap in 2021. I’d be foolish not to (take advantage financially) if that’s the way it goes.”

TICKETS ON SALE: Tickets for the Jerome Track Classic, ranging in price from $11 for a youth and $20 for an adult to $45 for preferred seating and $75 for VIP hospitality, are on sale now through the website www.harryjerome.com