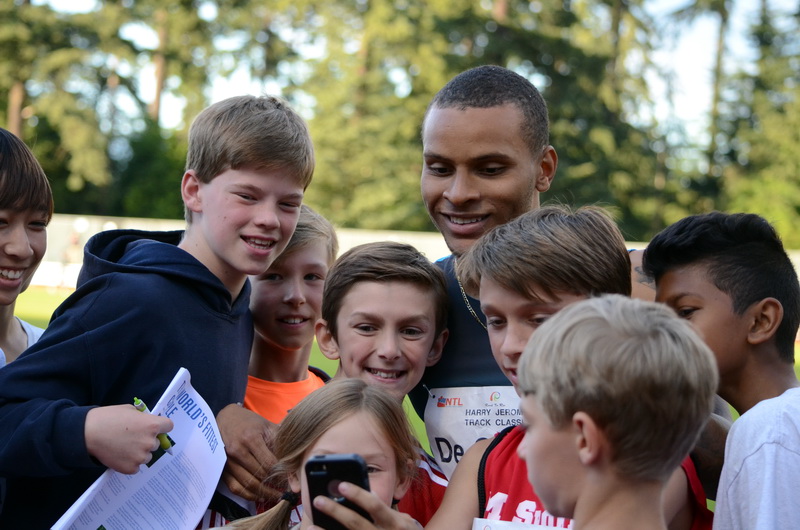 The 2016 Harry Jerome Track Classic saw a capacity crowd of approximately 6,000 enthusiastic sport fans show up to view Canadian and international athletes race, throw and jump their way on the road to Rio. A few big-name athletes competed and were subsequently mobbed by autograph seekers, post-race, including Canada’s sprint sensation Andre De Grasse.

“This is so great. To have an opportunity to come back to Canada and race, I don’t get to do that very often, to run in front of my home crowd,” said the 21-year-old, Scarborough native, who was clearly enthused about his newfound popularity on home soil.

De Grasse competed in both the 100-metre and 200-metre events, winning both in the time of 10.32 and 20.46, respectively. They were performances from an athlete who is headed for the Olympics, while racing on a tired track; the times were not expected to be near his best on the night, which are 9.92 and 19.88 for the two distances.

The Swangard Stadium track will be replaced starting in September 2016.

“I don’t know how we are going to top this next year,” said Diane Clement, who is an important piece of the organization, along with her husband Doug Clement. “This is the best year in the 33-year history of the meet.”

With a new track Jerome next year could be a marquee event, nearly on the level of a Diamond League meet.

In the women’s 800-metre race, Melissa Bishop of Eganville, Ontario lit up the final straightaway, putting distance between herself and second place finisher Brenda Martinez of the US. Last year Bishop earned a silver medal during the World Championships that took place in Beijing; in the process she set a new Canadian record of 1:57.52. She set a new meet record last night finishing in the time of 1:58.79.

Bishop runs in rarified territory. She was just the third Canadian all-time to break the two-minute barrier for the distance. The first two to do so were Charmaine Crooks and Diane Cummins. Crooks ran over to the finish area and gave Bishop a hug upon finishing.

“Diane Cummins did so much for me as I was coming up. I was going through many of the same things that she was, so she was great with advice. I have gotten to know Charmaine over the past few years and she has also been a very good mentor and someone to look up to,” shared Bishop.

“The pacer did an excellent job tonight. I have been there. It is important for a pacer to not only be able to run the right pace, but to do it in control. She did a great job, which really helped,” added Bishop.

The Race-walkers started the evening off in the 5,000-metres event – a short race for the Canadian crew who are used to competing over 20K and up to 50K, typically. Evan Dunfee finished first. He was on pace to contest for the Canadian record of 18:45 during the first two-kilometres, however, the pace slowed and he finished in a respectable 19:31.55.

“I have to be racing at least that fast in the end of my longer races to seriously compete. I am fit, I just didn’t have that extra anaerobic piece needed to keep that pace up,” Said the Canadian 10,000m record holder. “There was nothing for me to gain by going out to try to run 19-minutes, so I went after the record. It was still worth it,” shared Dunfee.

“The crowd was great too, every lap here, they were so supportive.”

Dunfee said, “There was no justification to letting them back in. I think they made the right decision.” Dunfee’s remarks were echoed by several competitors during the night.

Derek Drouin, one of the world’s best high jumpers is heading towards the Rio Olympic Games with more pressure on him than when he competed in the 2012 London Olympic Games. He is the 2015 IAAF World Track and Field Championships gold medallist and he owns the Canadian record of 2.40m.

Drouin and company didn’t perform at the level that they wanted to, with Drouin jumping to 2.20m, enough to win the event and work out some details, however, he said with an aw shucks manner, “yeah, not what we were looking for, just 2.20m, but that’s okay Sunday in Victoria will be better.”

She sat, she kicked and she won.

American Shannon Rowbury showed the crowd some finish line focus when she raced in the 1500-metre event, winning in the time of 4:09.47. During the final 50-metres she just handily passed the leader: up-and-coming Toronto native Gabriela Stafford, who finished second.

Stafford was in a race that carried potential Olympic qualification implications. She has run under the Olympic standard to make Team Canada, however, she is currently the fifth fastest in the country. Canada can send three athletes per event. In front of her in the standings are 2012 London Olympian Hilary Stellingwerff, who was in the race, fellow Torontonian Sasha Gollish, a few Americans and Kiwi Nikki Hamblin.

The final results indicated that the race was tactical in nature. The Canadian Olympic qualification time is 4:07.00.

Theisen-Eaton competed in both long jump and the 100m hurdles. She finished third in the hurdles and ended up crossing the line in a pedestrian 13.40. Asked about the race she said, “I felt sluggish, my legs felt tired, but it will all come together in time for Rio.”

Theisen-Eaton has little to prove in the way of fitness, she is a successful international athlete who has medalled four times during two indoor and two outdoor world championships, including earning three silver medals and one gold.

Several of the hurdles competitors do need to perform, including Edmonton’s Angela Whyte, who finished in 13:59. Whyte is Canada’s longest-competing hurdler, so as expected the question of age creeps in.

Whyte has just three weeks left to do so. Sunday at the Victoria Track Classic is one opportunity as are the Canadian Olympic Trials taking place in her home town. With the slight elevation, more practise and being buoyed by the home-town support Whyte may be able defy the age questions and qualify for her third Olympic games.

Also in the race was Toronto’s Nikkita Holder. She is ranked first in Canada during the qualification window with her 12.85. She leads a deep field of five other Canadians. Whyte is currently fourth with her 12.95, while Theisen-Eaton sixth at 12.98, but she will compete in the Heptathlon, which includes the 100m hurdles.

Jeremy Wariner competed in his specialty, the 400-metre sprint. He won, but winning wasn’t enough. The American needs to hit the qualification times and it is currently not happening for him; he finished in 46.64.

“This will be my last Olympics, if I can make it. Right now my times are going backwards. I have two or three weeks to go before I go to the American Olympic trials, so I will give it my best shot, that is all I can do,” shared Wariner, who is faced with the reality of retirement. He is a two-time Olympic medallist, which includes earning gold in Athens and a silver in Beijing. He has also won several world championships medals.

Canadian sports fans love their own athletes as demonstrated last night. While American Brenda Martinez’s who owns a personal best that is nearly as fast as Bishop’s in the 800-metres, Martinez escaped the crowd without being hounded for autographs. Ashton Eaton, although was given a loud welcome, as he is dubbed, “the world’s greatest 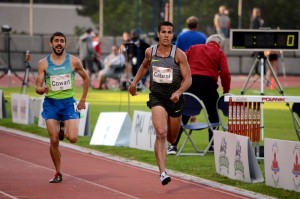 athlete,” was left pretty much alone.

Meanwhile Bishop, Theisen-Eaton and De Grasse were chased and cornered and prevented from moving around as kids flocked to the Canadian stars – a great sign for the sport of Athletics in this country.

Full results from the track meet are located, here>>

The next stop for the National Track League is Sunday in Victoria at the Victoria Track Classic.