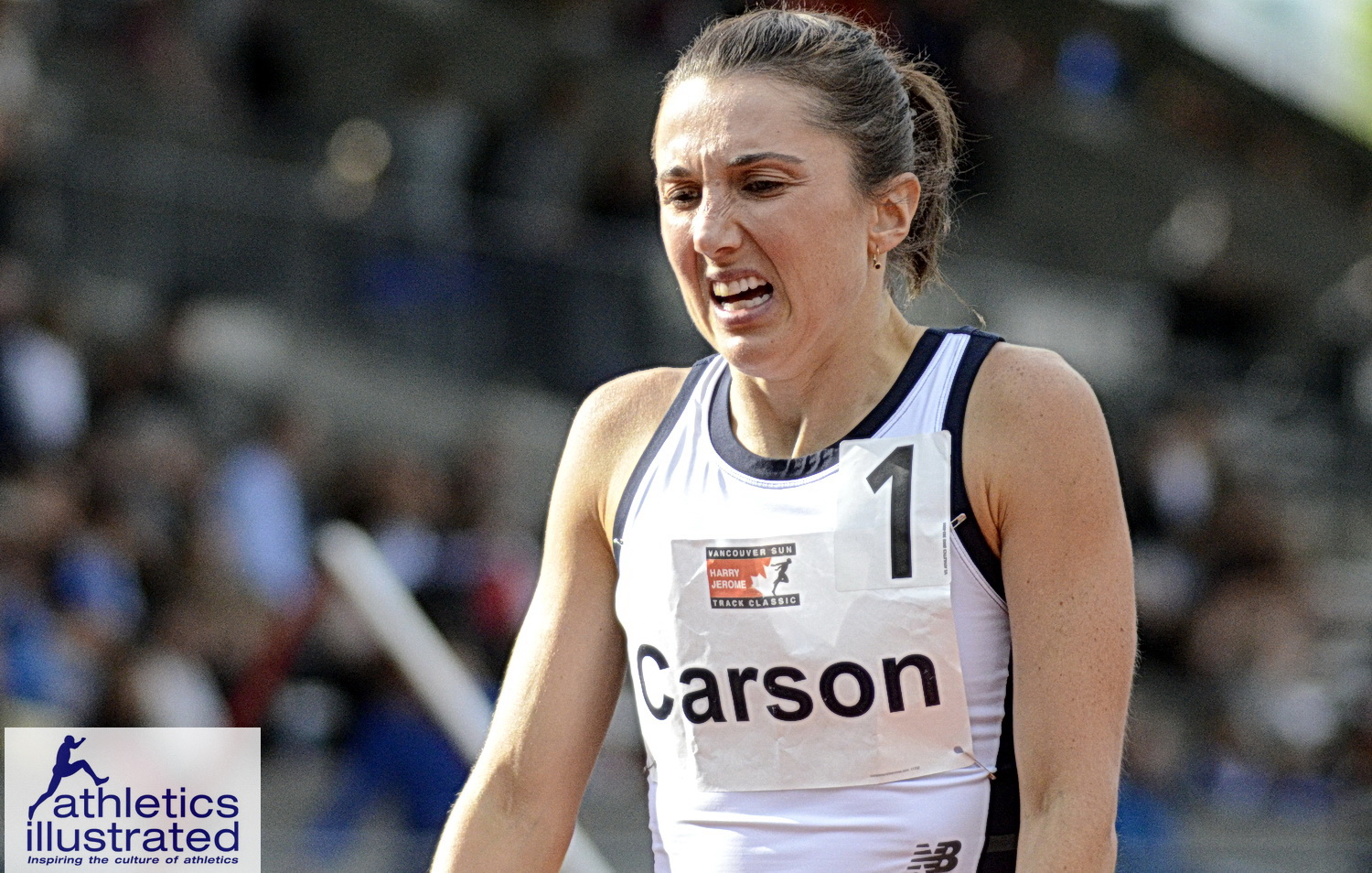 Don’t tell that to a host of athletes, who were inches shy, sort of speak, from qualifying for the 2019 World Track and Field Championships. The big meet will be taking place in Doha, Qatar starting Sept. 27.

But, truer words couldn’t have been applied on Thursday night at the 36th annual Harry Jerome Track Classic in Burnaby, BC’s Swangard Stadium.

Toronto’s Aaron Kingsley Brown nearly gave up the sprint game a few years ago, but persevered and was rewarded in 2016 with sub-10 second, 100-metre sprint performances. Since then, things have changed in Mr. Brown’s world.

After running a 10.30 as the main event on Thursday, Brown found himself surrounded by a horde of autograph seekers, so much so, that a fellow athlete wondered aloud if there is a need for security.

Andre de Grasse was rewarded with the exact same crowd reaction three years prior – he was also racing Thursday, but not in Vancouver.

Brown’s start, out of the blocks, appeared fast. He took the lead earlier and perhaps gained a little over the final third of the race, but the soft new track and a slight headwind kept the finish times modest. Fellow Canadian, Jerome Blake, finished second in the time of 10.42, while American Remontay McLain finished third in 10.52.

Regardless, it was an exciting race that thrilled the crowd.

Asked if he was aware of how de Grasse performed in Ostrava, CZ in the Diamond League earlier in the day, going sub-20 in the 200m, Brown said, “I did hear that. I am happy for him. We push each other. When one of us runs fast, the other follows. It’s a friendly rivalry.”

Asked about his seasonal goals he said, “I am putting it out there, not hiding from it, but I am looking to medal in Doha at Worlds.”

When it was suggested that perhaps there could be a pair of Canadian sprint medals, he smiled and said, “I like the sounds of that.”

Then he was back to the hordes and signing autographs.

At first, it appeared that Toronto’s Phylicia George could possibly win two events on the same night as earlier she took the 100m hurdles in 13.23. However, Khamica Bingham had something to say about that and won in the time of 11.54 into a headwind of +1.3. George made it interesting finishing second in 11.58 and American Jasmine Todd crossed the line third in 11.89.

The qualification standards for the 2019 World Athletics (formerly IAAF) Track and Field Championships in the 100m are 10.10 for men and 11.24 for women. Brown qualified in May with a 10.00 performance, while Bingham has run as fast as 11.34 so far this season.

George has qualified in the hurdles with a 12.90 performance in June in Poland, 12.98 is the women’s standard.

Yee is starting to feel better after a bout with strep throat, followed by a reaction to Amoxicillin and the stress of applying for a Therapeutic Use Exception or TUE, to take a medication that could be on the banned list or cause an adverse finding in the Athlete Biological Passport (ABP).

It’s difficult to find the right race with the right conditions. Between Yee and her coach Mark Bomba, the search is on for a meet that offers the steeple and a competitive group of athletes to race with.

Asked how she felt about missing the standard she said, “Very frustrated. I have been trying to think of it like, “the fitness is there, I am so close, I can do it next time,” but to be within inches of the standard is a little bit heartbreaking.”

Her fitness came around well this season as she raced a 5,000m personal best in the time of 15:31.62 at the Payton Jordan Invitational in May this year – a strong performance.

To open the high-performance portion of the meet, a men’s 3,000m race was put on.

Reid Buchanan of Mammoth  Lakes, CA took the lead early and kept it through the race. He finished nearly three seconds up on fellow American Fred Huxham. They finished in 7:55.09 and 7:58.14 respectively, while Vancouver’s Luc Bruchet crossed the line in third in 7:58.54. Bruchet is still making his comeback from injury.

Vancouver’s Justin Kent finished fourth in the time of 8:04.10.

“This was an opportunity to mix things up,” said Buchanan. “I am really a 10K and 5K runner, but wanted to get in some more intense racing – some under-distance stimulus.”

“I will be racing some 5,000m events coming up,” shared Buchanan. “I am hoping to improve my best at that distance.”

At Swangard Stadium, national record holder in the 100m sprint, Bruny Surin (9.84) was spotted in the stands. He was there to watch his daughter Kat Surin, who is following in his footsteps – she raced the 400m event and finished second to American Lynna Irby. Irby stopped the clock at 52.34, while Surin finished in 54.07. The third-place finisher was Stephanie Cho in 54.23.

The 23-year-old Surin was hoping to qualify for Doha, which would require a 51.8 finish time. She told CBC earlier in the week, “I think I can run a 50-low. It is just a matter of executing my race.”

It could be argued that she slowed when she saw that she wasn’t going to be beating Irby and that neither athlete would eclipse the standard.

Most athletes from the meet will also be looking to compete in their respective national championships. For Americans, they will be running nationals in Des Moines, IA, while Canadians will compete on the same weekend in Montreal, QC July 25-28. The Australians held theirs in April.

North American athletes essentially have one month to qualify in their respective events if they want to race in the 2019 Doha World Athletics Championships.