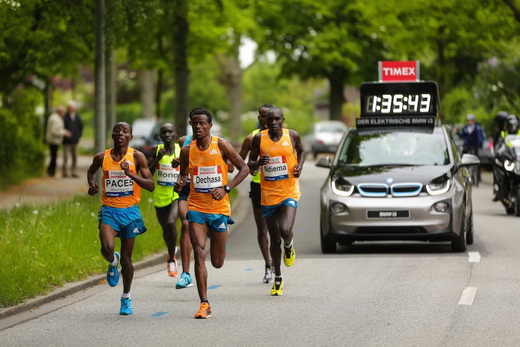 Tadesse Tola and Shumi Dechasa are top of the charts among the elite athletes for the Haspa Marathon Hamburg which takes place on April 17. While the Ethiopian Tola is the fastest man in the field with his time of 2:04:49, his former compatriot Dechasa is the 2014 race winner. Since 2013 Dechasa has been running for Bahrain and in Hamburg two years ago ran what remains his personal best of 2:06:43. He is one of six runners whose lifetime best is under 2:07:30 in the elite men’s field announced by the organisers of the Haspa Marathon Hamburg today. Including a relay event around 23,000 runners are expected to participate in Germany’s biggest spring marathon on Sunday, April 17. Online entries are still available at www.haspa-hamburg-marthon.de

“We are excited at prospects for the race. If conditions are good, we can expect to see very good times on April 17,” said the race director Frank Thaleiser.

While for many leading runners the pursuit of Olympic qualification for their respective national teams will be their priority in the 31st edition of the Haspa Marathon Hamburg, Shumi Dechasa doesn’t have to worry on that score. His place in Rio is already booked. The Bahrain record holder in the marathon earned selection with fifth place in the World Championships in Beijing last year. The 26-year-old’s objective instead will be to achieve his second win in three starts at the Haspa Marathon Hamburg as well as the challenge of improving his personal best. He made his marathon debut in Germany’s biggest spring marathon in impressive style, running 2:07:56 for fourth place in 2012. He went over a minute faster in achieving his personal best of 2:06:43 for victory in Hamburg in 2014.

Shumi Dechasa is likely to pay special attention on race day to two former compatriots and a Kenyan duo among his rivals: Tadesse Tola is the fastest contender with a personal best of 2:04:49 set three years ago in Dubai and that time also makes the Ethiopian the fastest man ever to be entered for the Haspa Marathon Hamburg. The 28-year-old won a bronze medal at the 2013 World Championship marathon and delivered further proof of his quality when he finished second in the Tokyo Marathon in 2014, running 2:05:57. Such is the high standard of Ethiopian distance running, Tola is likely to have to run faster than ever to qualify for Rio. Although Feyisa Bekele has a strong personal best, the Ethiopian’s performances in recent years have fallen short of the standard shown by his 2:06:26 in Amsterdam in 2012.

In contrast, Philemon Rono of Kenya has shown consistently good form. Two years ago he made an excellent marathon debut in Hamburg, finishing third in 2:07:07. He added a fourth place in 2:08:18 last year so will be making his third consecutive appearance in Hamburg. The 25-year-old’s recent form bodes well, running 60:42 at high altitude in the Nairobi Half Marathon, only three seconds outside his personal best. Another Kenyan whom Shumi Dechasa will have to take into account is Ezekiel Chebii after his improvement to 2:07:18 in Amsterdam last autumn.

Another runner who has long enjoyed a high international profile is Hendrick Ramaala of South Africa. At the age of 44 it is probably too much to expect him to be in contention for victory, but the 44-year-old could still achieve something out of the ordinary: Hamburg represents his attempt to qualify for a fourth Olympics. Ramaala has proven pedigree, having won the New York City Marathon in 2004 and run 2:06:55 for third place in London in 2006. Challenging for a fourth Olympic Games will still be a tall order, given that Ramaala has not broken 2:12 since 2009.

Two marathon debutants will be worth watching on April 17: Moses Kipsiro of Uganda, the 2009 World Cross Country silver medallist and with a successful track career behind him, moved closer to realising his marathon potential with a half marathon debut of 60:41 for eighth place in New Delhi last autumn. Nicholas Bor of Kenya should also be capable of a strong debut, having run 27:38 for 10km on the road and 60:09 at half marathon.