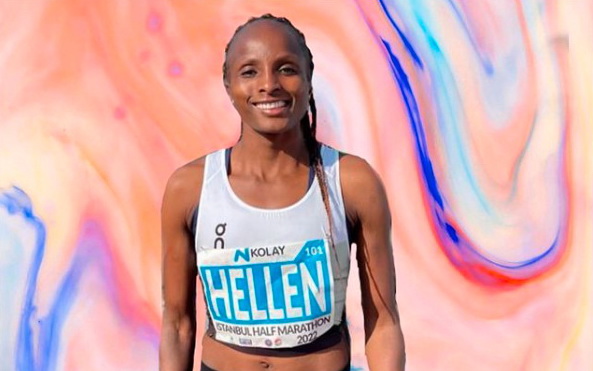 Kenyan, Hellen Obiri, a two-time Olympic silver medallist in the 5000m event won the N Kolay Istanbul Half Marathon Sunday with the 10th fastest time in history. She clocked a one-hour, four-minute, and 48-second run to finish more than a minute ahead of her nearest competitor.

Istanbul delivers once again 💪@hellen_obiri 🇰🇪 runs 1:04:48 for the 10th fastest ever women's half marathon and Rodgers Kwemoi 🇰🇪 breaks the course record with 59:15 👇

Ethiopians Tsehay Gemechu and Bekelech Gudeta finished second and third in 65:65 and 66:35, respectively.

Running with a male pacer, Obiri and Gemechu split 5K in 14:45. This was nearly 62 minute pace. Gudeta and Kenya’s Vicoty Chepngeno were already dropped by this point.

Obiri passed through 15K in 45:27 and then 20K in 61:16. Obiri finished third in 2021. She has run the fifth-fastest performance all-time with her 64:22 clocking from the Ras Al Khaimah Half Marathon last month.

The men were on pace for a world record through 5K, however, the wind held them back a little. Kenyan Rodgers Kwemoi broke the course record for the win. He finished in the time of 59:15. Fifty seconds back was fellow Kenyan Daniel Mateiko in 60:05. And making it a Kenyan podium sweep, finishing in third place was Emmanuel Bor clocking a 60:20 performance. In fact, the first five were all Kenyan as well as nine of the first 11.

The 24-year-old Kwemoi owns a best that he set last month at the Ras Al Khaimah event with his 58:30 finish time.

Kwemoi is also the 2016 World U20 Champion and Commonwealth Games 10,000m bronze medallist. He finished seventh in the event at the Tokyo Olympic Games.