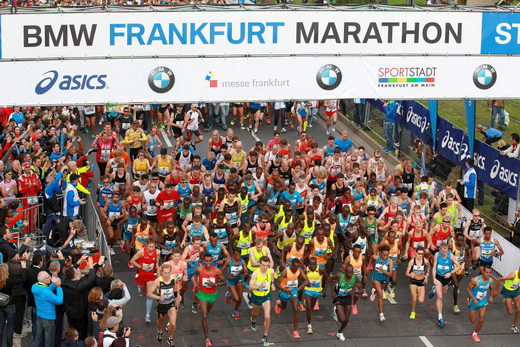 The Frankfurt Marathon will get underway on Sunday with an elite field which looks capable of living up to expectations for a high quality race. As many as 12 runners who have broken 2:10 are entered and eight women have sub 2:30 performances to their credit. This pedigree of line-up confirms the Frankfurt Marathon’s position as one of the leading autumn races worldwide at this distance. The Ethiopian Bazu Worku is the fastest man on the start list with 2:05:16 while his compatriot Koren Jelela Yal has a best of 2:22:43 to head the women’s field. But for once the centre of attention is not on an athlete from East Africa but a European: Arne Gabius, the 34-year-old from Stuttgart, is aiming to break the German record on Sunday which has stood for 27 years. It was 1988 when Jörg Peter ran 2:08:47 in Tokyo. The Frankfurt Marathon is, along with its counterpart in Berlin, the only German race holding the IAAF Gold Label awarded by the IAAF, the highest category of road race. The organisers expect to have around 15,000 participants on Sunday in an event where entries are still open.

The autumn marathons internationally have been dominated so far by Kenyans. From Berlin to Chicago and, most recently, Amsterdam, both men’s and women’s top prizes have gone to their athletes. But perhaps the Ethiopians can turn the tables on them in the race beside the River Main on Sunday.

Now 25, Bazu Worku made the headlines early in his career, breaking the world junior record for the distance and is making his return to Frankfurt. He made his marathon debut as an 18-year-old in Paris in 2009, running 2:06:15. A year later the Ethiopian improved with 2:05:25 in Berlin. His previous appearance in Frankfurt was 2012 when, despite freezing temperatures, he produced a strong performance to finish fifth in 2:08:35.

He began 2015 in fine style with sixth place in 2:07:09 at the traditionally high quality Dubai Marathon in January, his fastest time for over four years. One place ahead of him in Dubai came an athlete who is expected to confirm his place among the world elite: Sisay Lemma Kasaye ran his personal best of 2:07:06 in the United Arab Emirates. Still more impressive was his race in the Vienna City Marathon in April, where he had a commanding lead for much of the race and won in 2:07:31 – a winning margin of around five minutes was the biggest in the event’s long history. The 24-year-old’s next objective is to win selection for next year’s Olympic Games in Rio and Frankfurt could be a crucial step in that direction.

While Philip Kimutai (2:06:07), Micah Kogo, the former world record holder at 10km with a marathon best of 2:06:56 and Alfers Lagat (2:07:11) form a potent Kenyan trio, Arne Gabius is looking to stay in the lead group for as long as he can. “I can’t wait for the Frankfurt Marathon to begin, I’m ready,” said Arne Gabius ten days ago in Berlin when he ran his best ever 10km time of 28:07 and finished fourth in a top class event. He’s long been open about his intention to attack the German record of 2:08:47, following his marathon debut last year in Frankfurt when he surprised quite a few people with his 2:09:32. The German Olympic qualifying time of 2:12:00 should, in normal circumstances, be a mere formality for Gabius.

It would be a major surprise if the women’s title went to an athlete from any other nation but Ethiopia. Four of their runners have personal bests of between 2:22 and around 2:25. Koren Jelela Yal is returning after maternity, aiming to regain the kind of performance which gave her a lifetime best of 2:22:43. Among the rivals for the former Toronto Marathon winner are her compatriots Meseret Mengistu Biru, who ran 2:23:26 to win in Paris in April, Ashete Bekero Dido (2:23:43) and Dinknesh Mengistu Tefera (2:25:09). Also worth watching should be the Rome Marathon champion this year, Meseret Kitata Tolwak.

Leading Contenders in the Frankfurt Marathon