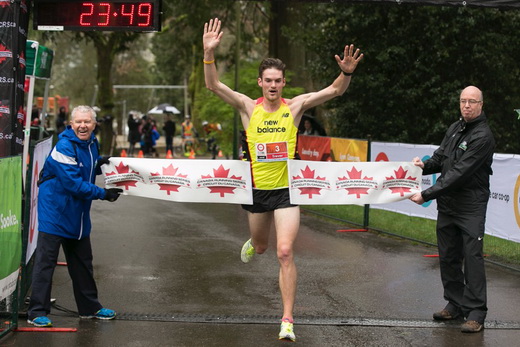 ELATED FOR @DaynaPidhoresky !!!! Her day has finally come!!! Congrats to you and Josh!!!! https://t.co/nAXoq6cfNQ

Marathon runners Dayna Pidhoresky of Vancouver and Trevor Hofbauer of Calgary finished as first Canadians at the Scotiabank Toronto Waterfront Marathon Sunday to qualify for the 2020 Tokyo Olympics next July.

For 27-year-old Hofbauer, it is his second national marathon championships win, however his performance was a quantum leap forward into international-level running. Pidhoresky, in contrast, has indicated for years that she is capable, so it was just a matter of getting it right on the day and she would demonstrate her ability.

Hofbauer finished in the time of 2:09:51. Until the 2018 Toronto Marathon, the national record was held by Jerome Drayton from his 1975 performance in Fukuoka, Japan at 2:10:09, many Canadians since then had tried and failed to improve upon that record. Cam Levins, who finished in a slower than he would have wanted performance of over 2:15 today, took the record last year in 2:09:25.

So, it is with great surprise that Hofbauer did the same one year later. His personal best was 2:16:48 from Hamburg last year and his half-marathon best is 64:30, neither of which indicated that he was capable of running sub-2:10.

“I’m just happy that I didn’t screw it up,” he told Athletics Canada. “I was giving high-fives down the finish line, so for anybody who has been bashing me for that, I left it out there today so you can’t take that away from me.”

Pidhoresky rallied to a 2:29:03, after having several performances that were good, but in her books not where she thought she should be. The women’s Olympic standard is 2:29:30. Her previous best was from Ottawa in May of 2017 at 2:36:08.

In contrast, her half-marathon best from Edmonton last year showed that she may be fast enough to go sub-2:30 on the right day, as she finished that race in 72:38.

She told CBC, “Honestly, I feel I’ve had that in me for years, and it just came together at the right time. I had probably [my] rockiest [marathon] build ever.”

American-Canadian Kinsey Middleton from Boise, ID, the 2018 champion, finished third in the time of 2:34.36.

Emily Setlack missed the Olympic standard by a heart-breaking 18 seconds for second in the Canadian field.

Meanwhile, the overall winners were Kenyans Philemon Rono in 2:05:09 and Magdalayne Masai-Robertson in 2:22:16. Both are course records.