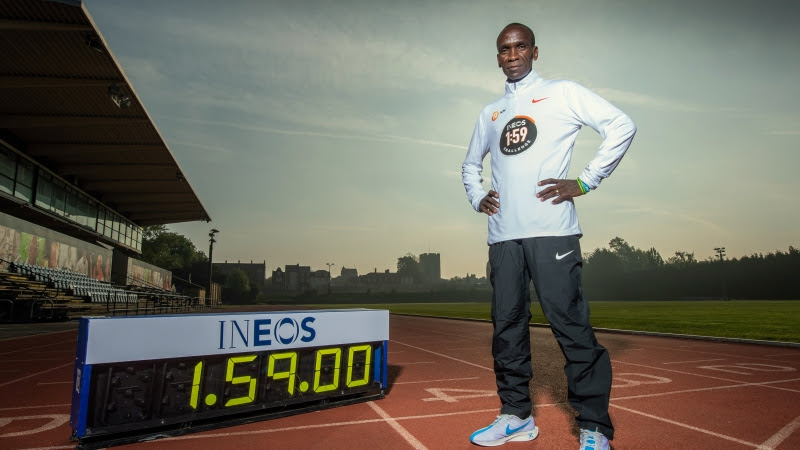 Broadcast coverage to be shown in more than 200 territories across the world. The live stream will be viewable here at Athletics Illustrated.

The INEOS 1:59 Challenge will be live-streamed globally.

Ground-breaking ‘second screen’ option will also be available to fans.

The INEOS 1:59 Challenge has agreed to an exclusive live social channel partnership with YouTube that will enable viewers to watch Eliud Kipchoge’s historic attempt to run the first sub-two-hour marathon live from wherever they are in the world.

The INEOS 1:59 Challenge YouTube channel will stream the entire live broadcast of the event which is being delivered by the British independent award-winning TV sports production and media company Sunset+Vine.

Viewers will also have the option to watch the race coverage on a ground-breaking second screen option on www.ineos159challenge.com which will allow interactivity that has never-been-seen-before in athletics coverage.

With three weeks to go, so far 30 broadcasters within 200 plus territories worldwide have agreed to broadcast the INEOS 1:59 Challenge live, with more to be broadcasters to be announced in the coming weeks.

Additional broadcasters that have agreed to show highlights, news and additional programming from the INEOS 1:59 Challenge include:

Tom Crotty, INEOS Group Director for Corporate Affairs and Communications, said: “Eliud Kipchoge’s mantra is No Human is Limited and he wants to use the INEOS 1:59 Challenge to inspire everyone to believe in themselves. Our role is to enable people around the world to watch his incredible, historic effort to break the two-hour barrier for the marathon.

“The innovative second screen is an absolute first for athletics and will give viewers the choice of a wide array of content including exclusive content, Eliud’s road to the Challenge, data timing feeds and much more.”

For those in Vienna able to watch the historic INEOS 1:59 Challenge live, they can do so from the roadside of the Hauptallee, the famous boulevard in The Prater, completely for free.

There will be no ticketing on the course but spectators are advised to get to the route early to get a good position. There will be two fan zones with big screens and entertainment at the following locations:

The INEOS 1:59 Challenge will be held on Saturday 12 October. If weather conditions are not suitable, an eight-day window until Sunday 20 October has been set aside for a replacement date.

Viewers should subscribe to the INEOS 1:59 Challenge YouTube channel now to get regular updates on the challenge including exclusive content. The YouTube channel and www.ineos159challenge.com will also give updates in the days leading up to the Challenge confirming what time and day the event will take place.