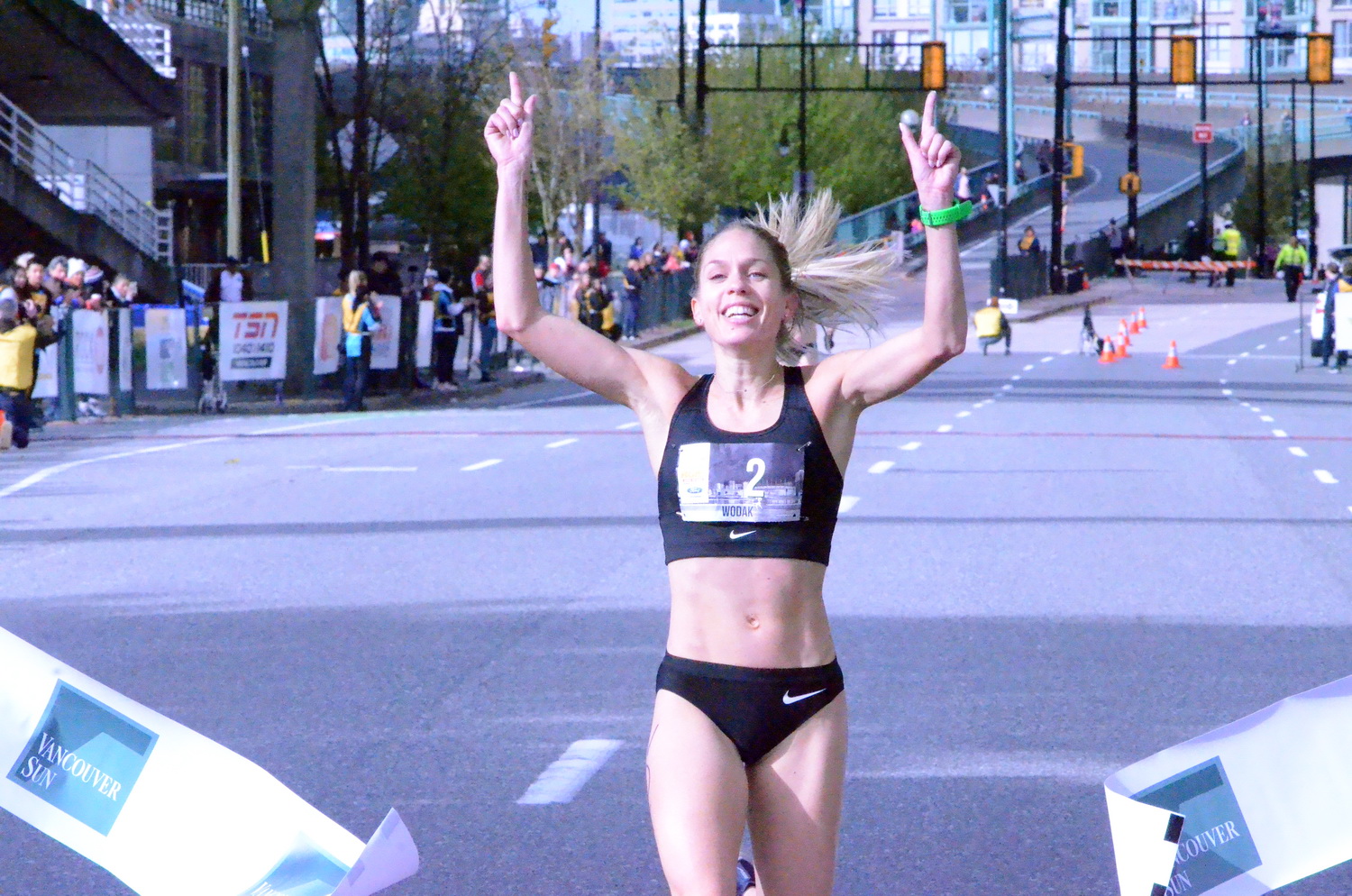 How fast can Canada’s 10,000-metre record holder Natasha Wodak run the marathon? We will have to wait to find out on Dec. 20 when she tackles The Marathon Project event that is taking place in Arizona.

Say what you will about the scoring tables, but some of the best athletes own a range of personal bests that score quite evenly across the distances.

It’s one thing to run that well at a race that is organized to go fast. For example, her record was set at the Payton Jordan Invitational on the Stanford University track — a known fast event. It is another thing to do pretty much just as well in championship races. Championship races are often tactical with random surges and sometimes athletes get gapped enough that they are essentially running alone. Not an easy task over 25 very hard laps.

So, for the purpose of benchmarking her best 10,000m time of 31:41.59 stands up. Two years before that performance, she ran at that same level in an 8K road race, finishing in the time of 25:28, which was an identical performance. It is also a national record. She also ran a 31:59 road 10K, which stands up well against her track performances

Wodak’s half-marathons have also been run at that same level. She has run several 71 and 70-minute performances as well as a 69:41 in Houston this year. For a very short period, it stood as the national record back in January. Wodak was the first Canadian to drop below 70-minutes. She is still just one of two Canadians to do so. The other is Andrea Seccafien who just two weeks after the Houston event, raced in Marugame, Japan and finished with a 69:38 performance.

“I am really enjoying this marathon build,” said Wodak. “It’s enjoyable because Lynn (coach Lynn Kanuka) and I created a great plan and I’m in a good place in my life.”

The Marathon Project will not be Wodak’s debut, but it will be her first serious attempt at the distance. She did run a 2:35.16 in 2013 in Toronto. “I was emotionally drained for that one.”

She said that she is running approximately 138K (85-miles) per week, plus spending three hours per week on the elliptical trainer.

What about the shoes?

Damned if she does, and damned if she doesn’t wear the fastest pair of shoes available to her. There are various brands and models of carbon-fibre-plated shoes that help to propel athletes forward with each step. They also have been proven to reduce energy expenditure. Numerous national and world records and personal bests have been achieved wearing the new shoes, especially during the past 12 months. But determining outcomes in advance of using them is a guessing game. However, there is peer-reviewed data that indicates that the Nike Vaporfly 4% provides a clear benefit.

With some form of carbon-fibre-plated shoe, she may be able to chase the national record. The record is 2:24:50 by Malindi Elmore. Elmore took the record at that same Houston event where Wodak took the half marathon record back in January. Elmore ran in the Nike Vaporfly Next % shoe.

Wodak will be wearing the same Nike Next %’s in Arizona. “I have four specific sessions that I need to get through to be able to see what kind of marathon shape that I am in,” she added. “But again, I am hoping to be in 2:26:00 shape.”

Apparently, The Marathon Project is taking place on a new and very unique course is going to offer a very fast route and elite-only fields for athletes from North America.