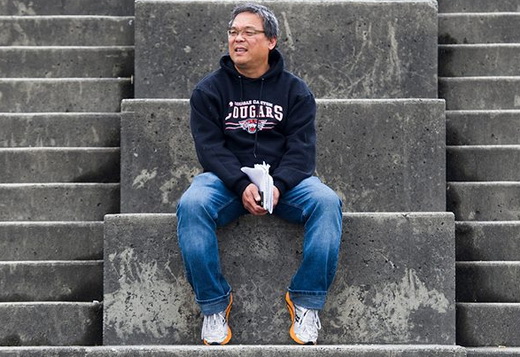 The Vancouver Province newspaper held onto its high school and university sports reporter for as long as they could. They kept Howard Tsumura until January 31, 2017. He was the last of the full-time school sports reporters for newsprint in all of Canada. Now there are none.

Tsumura’s muse was broad and it came from all corners of the lower mainland for 27 years, from October, 1990 to today, from Abbotsford to the North Shore.

Tsumura got his start in Houston, BC where he covered the Houston Secondary Wolverines basketball team in 1983. He went onto work for various publications throughout the lower mainland before settling into the Province at age 27. He has been there since.

“When I heard about Howard’s departure from the Province newspaper, it brought back a lot of good memories from my own career,” Shared Chris Winter, who recently retired from his international athletics career, where he specialised in the 3,000-metre steeplechase and was a competitive cross-country runner.

“I was fortunate to have been featured in one of Howard’s famous “Head of the Class” pieces, and I still remember the feeling I got when I opened up the paper that morning and saw my picture there – it was the first time where I felt like I had made it,” added Winter.

Tsumura wrote in his final blog post in the Province today of high school sports, “It is so pure and so powerful that when their accomplishments were recognized in the ways I always felt most important, they epitomized hope and potential.

It’s why Head of the Class (feature) gained so much momentum over its 18 years of publication at our newspaper.

I am biased, but I always thought my beat was the most important one at our paper.”

Where he may turn up, I am sure his work will be welcome and highly appreciated by the thousands of kids, coached, parents and volunteers who followed his coverage.

“Howard did such an amazing job covering high-school and university sports in the Province. He helped shine a light on and introduce the public to BC’s best young athletes – some who would go on to do great things later in their careers. While it’s sad his time at the Province has come to an end, I wish him all the best in the next chapter of his career,” added Winter, who went on to compete in the 2016 Rio Olympics.