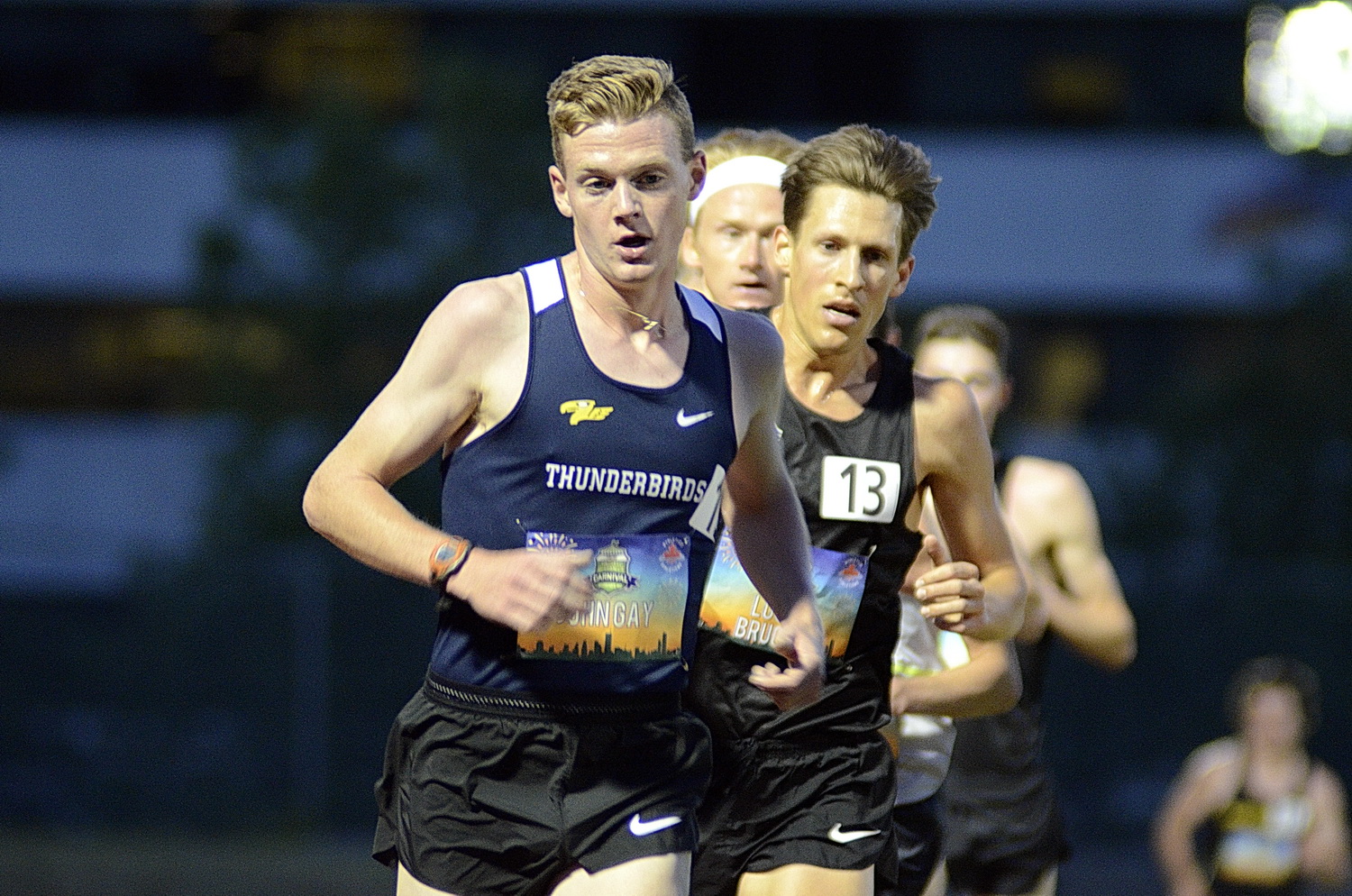 The sporting world is a busy place where memories are made up from indelible moments, rather than from the details that make up the long training grind of an endurance athlete or the endless regular season for a hockey or basketball team.

The timing of the inaugural Pacific Distance Carnival in Burnaby, BC (Vancouver), luckily avoided conflict with the Stanley Cup final game between the St. Louis Blues and Boston Bruins – the Blues – the most Canadian team in the NHL – won for the first time in 52 years; it’s a moment no one will soon forget. The next night the Carnival was up against the first NBA championship win by a Canadian-based team.

So while strong international talent was racing around Swangard Stadium track, a big screen television – thanks to event sponsor Saucony – the Raptors and Warriors battled it out in Game 6 at the track too.

Even though there were several great performances, nothing would eclipse the pandemonium created in Northern California for basketball fans from across the Great White North, especially in Toronto. At Swangard, the cheers just kept getting louder as the evening progressed, from the TV-watching gallery.

Meanwhile, Vancouver’s Natasha Wodak ran a wonderful 10,000-metre race in front of friends, family and the most dedicated athletics fans from around Greater Vancouver. During the final mile of the race, she took the lead for the first time, held on and the dropped the hammer over the final of 25 laps for a 32:09.69 performance.

Behind her, Sarah Inglis, who trains in Vancouver, but is Scottish and was freshly named to the British team earlier in the week, ran a 25-second personal best. She finished in 32:11.42. The third-place finisher was Vancouver’s Rachel Cliff, who owns the two fastest marathon times in Canadian history. She finished within arm’s reach of Inglis in 32:12.24. Her best is 31:54.88 from May of this year at the Payton Jordan Invitational.

“I am really excited by the 25-second improvement on my personal best,” said Inglis. “I have to thank the pacers and Natasha for finishing so well, who helped me run that performance.”

For the win, Wodak is the national 10,000m champion and earns $500 in prize money – not bad for 32-minutes of work. For Inglis, she will have an opportunity to race the distance again at the Night of 10,000m PB’s that takes place in London next month; an event that the carnival was inspired by.

Emily Setlack of Kingston, ON ran a new personal best. She is having a strong season and on Thursday under the lights, she crossed the line in sixth position with a time of 32:56.83.

She has run at least two other personal bests this season including a 33:03 at the Ottawa 10K in May and a 2:35.47 marathon debut in Rotterdam back in April. Setlack also has a west coast connection in that her coach Jim Finlayson lives in Victoria.

Also, out from Kingston were Branna MacDougall and Cleo Boyd of Physi-Kult Running.

Americans Elaina Tabb and Sarah Pagano were also in the race, but ineligible for the national championships title. Representing Adidas, they finished fourth and fifth in 32:15.58 and 32:31.75, respectively.

Canadian-American Kinsey Middleton of Boise-ID finished eighth behind MacDougall in 34:28.26.

The men’s race was no less exciting, but eventual winner, Ben Flanagan, did not let it turn into a race.

Asked how many times he gets feedback from his NCAA 10,000m championships when after finishing he went looking for his mother – yelling for her – and hugged her in the stands, he said, “all the time,” laughing. It is a moment etched in the running community, like Jon Montgomery’s beer pitcher moment in Whistler Village during the 2010 Winter Olympics.

“I would like to take a more serious try at the 5,000m distance, so I will be racing a few of those coming up.”

Local University of British Columbia talent was on hand to pace including John Gay and Kieran Lumb.

Lumb had already raced the 1500m event earlier in the evening, finishing second to Brad Bickley. Bickley won in the time of 3:45.17. It was Bickley’s second track race since starting his comeback after a hiatus. The former University of Calgary Dino owns a best of 3:44 – was very pleased to be within striking distance of his best.

“At 800m, I thought I was done but hung in there. I then found myself up against Kieran Lumb for the final 200m and I just gave it all that I have,” shared Bickley, who is from Edmonton, but started an investment firm in Kelowna.

It appears that at age 27 – that he refers to as old – has found his wheels, after fits and starts in the comeback including a stint with Coach Malindi Elmore, one of Canada’s all-time best middle-distance athletes.

“It’s on me.,” said Bickley. “I own that. I just couldn’t put the pieces together. It had nothing to do with Malindi.”

Elmore and her husband Graham Hood, also one of Canada’s all-time middle-distance greats – kidless for a change – could be seen at the event cheering on the athletes. Elmore will be racing the Canadian Half Marathon Championships in Winnipeg on Sunday, June 16. As will Vancouver’s Dayna Pidhoresky, who was noticeably missing from the main event.

Jessica Smith of North Vancouver – a rare site on the track over the past two years – not only raced the 1500m event; she won it in the time of 4:20.38. She had a year off due to plantar fasciitis. Smith was just the fourth Canadian all-time to eclipse the two-minute benchmark in the two-lap 800m race with her performance of 1:59.86 in June of 2012. She ended up competing in the 2012 London Olympics.

Former UBC Thunderbird Maria Bernard-Galea finished second in 4:21.21, while Shea Collinsworth of Layton, Utah finished third in the time of 4:22.25.

Asked if she is done with the 800m, Smith said, “No, I will be racing it coming up at the Harry Jerome Track Classic and other times.”

“I am happy to be running well again and will be just trying to run as fast as I can, so we will see what that means.”

Also on the comeback trail is Jessica Furlan who finished fourth in 4:23.12.

There were several 5,000m mixed races that went before the two 10,000m Canadian championships.

During the main events, Asian-style drummers played a war-like rhythm to the beat of the footfalls, to create atmosphere at the track as the sun set behind the North Shore Mountains and the lights of the ski resorts overlooking downtown Vancouver dotted the horizon.

The event appeared to go off without a hitch. The inaugural edition was a perfect first attempt at an annual celebration of running. Hopefully, for 2020, the meet will avoid conflict with someone else’s indelible moment and perhaps will create a few more of its own.