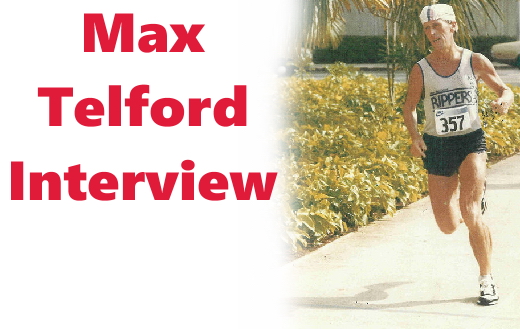 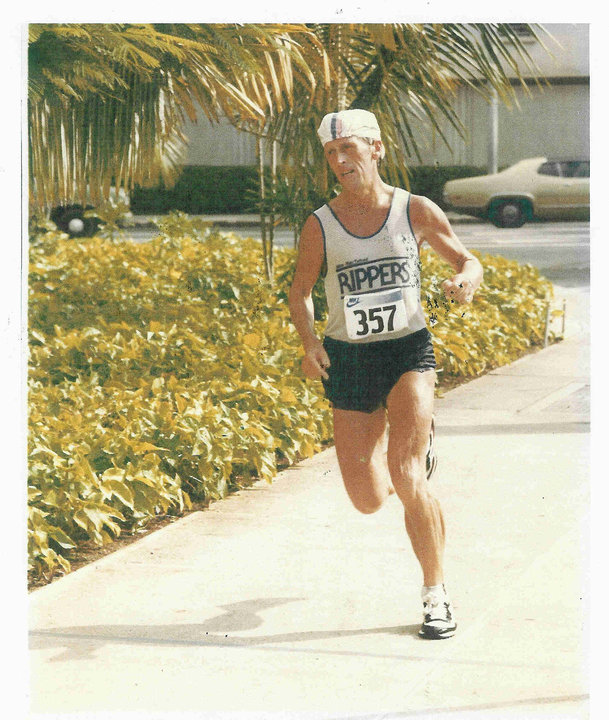 Max Telford is one of the world’s all-time greatest ultra-distance runners. He competed when ultra-runners were considered eccentrics; an oddball sort of the sporting world. If he competed today he would be a household name within endurance circles.

He was raised in the small city of Hawick, which is located in south-eastern Scotland, but during his early 20s he moved to New Zealand and ended up training with Arthur Lydiard’s group of middle and long-distance athletes. After not qualifying for New Zealand in the marathon for the Mexico Olympics, he decided to try longer distances and discovered an event that he could win.

Telford went on to take the world record for non-stop running at 211-kilometres (131 miles). He raced from Auckland to Wellington in five days and 13 hours and ran from Anchorage, Alaska to Halifax, Nova Scotia in 106 days, covering over 8,200 kilometres in distance.

Of course he didn’t stop there.

He became the first person to run through Death Valley, California twice — there and back again, in temperatures of roughly 55 degrees (131F). People have come very close to dying while running through Death Valley in the single direction run. His endurance and pain tolerance was nothing short of spectacular; perhaps the Scots would call him a gallus runner.

Now moving into the 80-84 age-category, he is just happy to jog and cycle daily to keep fit.

Christopher Kelsall: What made you tick?

Max Telford: I was always self-motivated.

CK: Clearly. Did you have a chance during your competitive days, to get to know former Scot and Canadian Al Howie?

CK: Okay, now what is a legendary Scot-cum-Kiwi distance-running icon doing in a place like the Philippines? Do the people have any idea who it is that is amongst them?

MT: Well, I met my wife in Manila when I was attending the Manila Marathon in 1986. We eventually married and she came to Hawaii where I was based with Air NZ. I moved to the Hong Kong office and spent a few years there. In the meantime, she was a flight attendant with United Airlines. When Air NZ wanted me to return to the U.S, I decided to retire.

We then moved to Cebu, Philippines, where my wife is from, and have been here since.

Yes, I am pretty well known in the Philippines. I have run many ultras here, for example, the Bataan Death March 96 miler (which is now an annual race. I am the only man to have run up and down Mayon Volcano (10,000ft.) I like to think I have been somewhat inspirational in the growth of ultramarathon running here in the Philippines.

CK: Do you follow the ultra-runners of today? What are your thoughts on the growing popularity of the event?

MT: It’s great to see the growth in long-distance running (ultras) it makes me feel good to have helped in the growth. In the early days, we were thought of being “nut cases”, not anymore.

CK: Speaking of which, can you describe your run through Death Valley in 1982?

MT: Firstly I ran across Death Valley in November thinking at the time why run it in summer, so I chose wintertime, running it in 19-plus hours (Shoshone to Scotty’s Castle).

Of course, the people in California said, “but you didn’t do it in summer”. That was why I ran in July (mid-summer) and ran it there and back (250 miles). It’s the hottest place on earth at times, and it was like running in hell.

CK: I heard about the bear in Alaska, was it a Grizzly? How close did it come before the truck got in the way?

CK: Yes they can. So was the sow gaining on you?

MT: I think it was but I can’t remember I was so scared.

CK: You have set several distance records and benchmarks for ultra-running. Which accomplishment are you most proud of?

MT: Every one of them was an accomplishment in their own right, from my first 100 miler in Auckland to Death Valley and the Grand Canyon. I was very proud to run up to the top of Popocatépetl in Mexico, which impressed Sir Edmund Hillary, but my greatest adventure was when I ran from Anchorage, Alaska to Halifax, Nova Scotia, now that was an adventure (49.2 miles per day for 106 days) (80K per day). 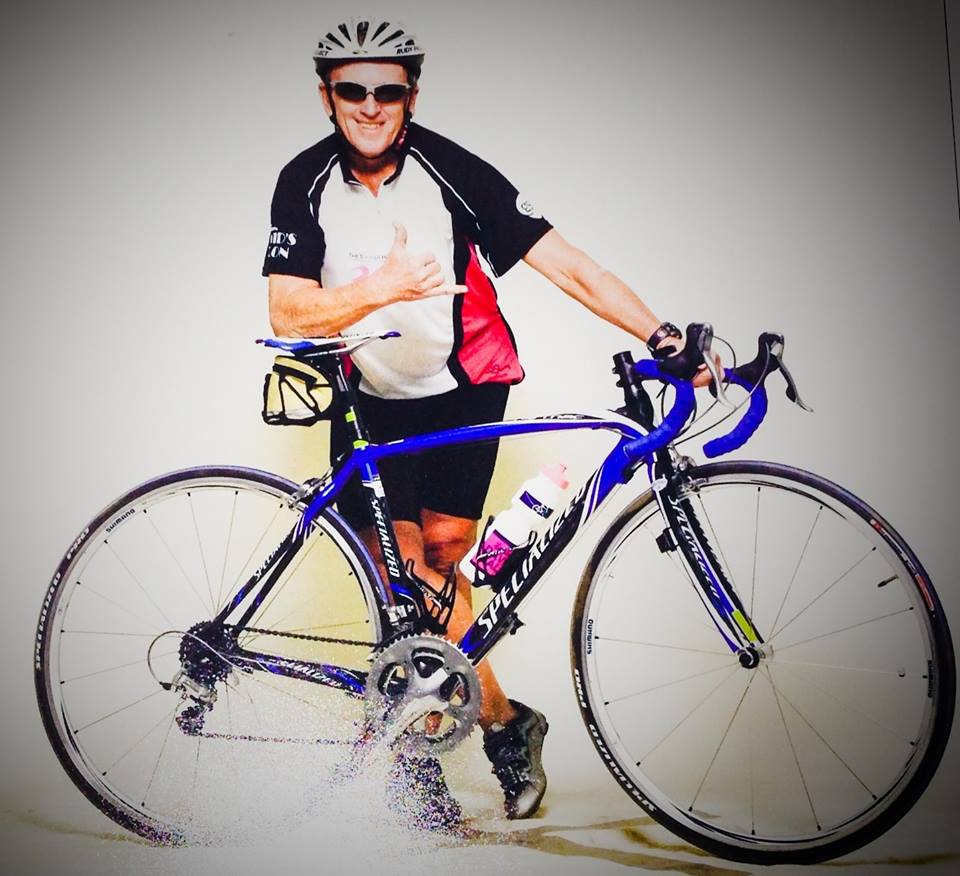 CK: What sort of mileage are you running these days?

MT: I jog for an hour most days, if not a jog then I bike (a bit slower than I used to) LOL.

We live up in the hills of Cebu so any workout is challenging.

CK: When you were running your best, what did a typical training week look like for you?

MT: Being a Lydiard-trained athlete, I did the stamina phase of 100-mile weeks followed by the strength phase of six weeks of hill training then on to the speed phase.

CK: Did you get to train with Arthur Lydiard?

MT: As I said, I was a Lydiard-trained athlete, so I would train with the group every weekend from Arthur’s house.

CK: Was 100 miles (162K) enough mileage once you moved up to the ultra-marathons?

MT: Heck no, I was doing 200 miles (322K) a week training for ultra’s, running most days three times, conditioning the body to run when it is tired.

CK: What is your personal best on the 22-mile Waiatarua route?

MT: Can’t remember exactly, a little over two hours if I recall.

MT: I was sponsored by Nike so I had plenty of Nike Waffles then.

CK: At what age did you start running? How did you discover the sport and begin running enormous distances?

MT: I played rugby in Scotland. When I emigrated to NZ, I arrived in the off-season for rugby, so I joined the Mount Albert Athletic Club to get in shape for the rugby season. I enjoyed it so much as well as showed promise I stayed with running, I was 23 at the time.

I initially ran middle distance plus cross-country/harriers in the winter. I soon discovered I could run further against faster runners so moved up to marathons. In 1968 I missed out by one place to make the NZ Olympic team for Mexico. I then sat down with Arthur and discussed my next move, for example, train for another four years to get another shot at an overseas team or move up to long-distance running, which was quite popular in other countries. The rest is history!

CK: How was your time in Oahu? Was the community conducive to running? I understand that back in the 1970s Hawaii had more runners per capita than any other US state, yes?

MT: I initially was invited to run in the Honolulu Marathon and to talk at their pre-race running clinic. I immediately saw the potential growth in running, and the need for guidance in the sport. I would return at various times to do some real long-distance running like setting the world non-stop running record of 300K’s (186 miles) on Maui, run up and down Mauna Kea Volcano on the Big Island, as well as the solo race around Oahu to name a few.

For all my running feats I was given The Key to the City of Honolulu by Mayor Frank Fasi. So with all the interest, I built up and the friends and contacts I accrued I decided to move to Honolulu. I was fortunate that the local Air New Zealand manager saw the potential and secured sponsorship for me and hired me as a PR guy, so my transportation was secured. I proceeded to form a running club called Team Telford where I got 100’s of runners signed up and coached and guided them.

Back then Team Telford won most races and was very prominent in the Hawaii running community.

CK: Can you describe your 21.1-hour race around Oahu?

MT: The big race on the calendar was The Perimeter Relay, a 121-mile five-man team relay. No one had ever thought of let alone attempted to run it solo. It didn’t take long to organize it. The thing that made it tough was the heat and the sun. I was like a red lobster when I finished, which was understandable considering I just flew in from a NZ winter. It was an amazing experience really the whole event was covered live by a local radio station.

CK: What sports did you play growing up in Scotland?

MT: Coming from a predominantly rugby town all we got was rugby, although when I was in the military I played soccer.

CK: How is your Tagalog?

MT: Tagalog…. no, but Visayan is spoken in Cebu, just so-so.

CK: You have some work to do. Do you plan to compete in your new age-group of 80-plus?

MT: My days of competition are over, the 180,000 plus miles I have run in my lifetime has caught up with my knees. Looking back I feel lucky I have gotten away with it for so long, most of my ex-mates can no longer run or jog. I think this is a tribute to my strong legs I inherited from my father.