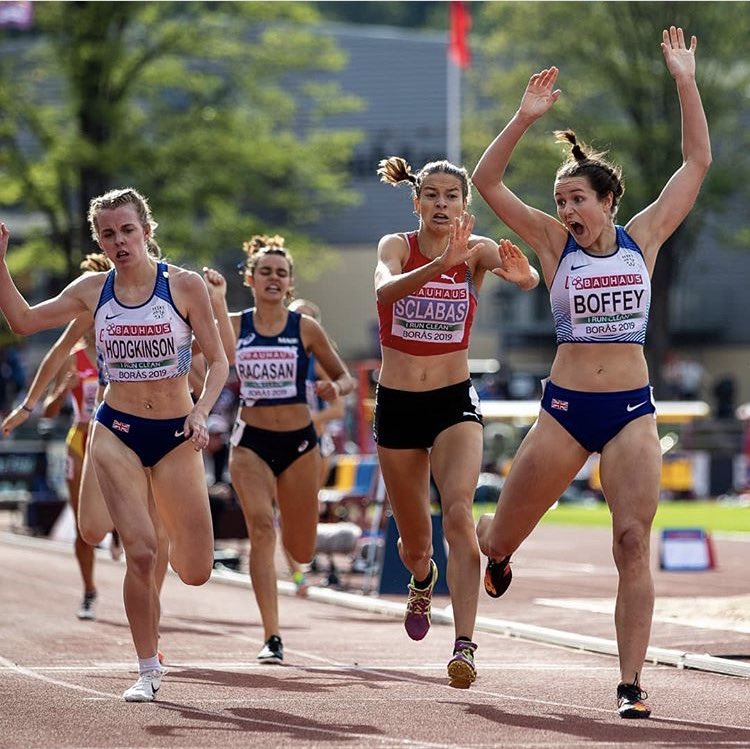 It was 800m gold for Isabelle Boffey (coach: Luke Gunn, club: Enfield & Haringey), while there were a host of fourth and fifth places on an exciting third day of action at the European Athletics U23 Championships in Tallinn, Estonia.

Boffey won the 800m in some style, after going through at the bell in third place she made a decisive move to the front of the field down the backstraight and after that there was only ever one winner as she pushed on to another European title.

Boffey, who is on the British Athletics Futures Academy programme, now has the full set of age-group championship gold medals with today’s victory adding to her titles from the European U20s in 2019 and U18s in 2016.

The University of Birmingham student, who finished today’s race in 2:01.80, said, “I am buzzing. I showed that as I crossed the line. I have run 2:01 a few times this season and I really wanted to bring my best to the champs. I tried to stick to my plan, and I knew if I did that, I could secure the gold. I now want to get into some quick races to get these times down and get a time for next season’s championships.”

EUROPEAN JUNIOR CHAMP 🤩🥇 and a new PB to go with it 🇬🇧 pic.twitter.com/HGgtR3wr8H

She added, “The middle distances in the UK just now is insane and I just need to train hard to get on their level next year.”

Khahisa Mhlanga (Mick Judd, Herts Phoenix) came in a strong fourth place in 2:04.05 overtaking three others in the home straight.  She was delighted with her performance, “I am pleased. It went out very quick, but I hung on in there and I managed to pick off a few in the last lap. I really enjoyed it.”

Shemar Boldizsar (Stephen David Loft, Harlow) was looking to retain his European U23 200m title, but in the final he could not match his exploits from 2019. As he approached the line, he was in contention for the bronze medal but there was a late shuffle in the placings as athletes dipped to the line, and he ultimately finished in sixth place in a time of 20.84 (0.3). Swiss athlete, William Reais, was a clear winner in a European U23 record of 20.47.

Earlier in the day, Boldizsar had made no mistake qualifying from his semi-final in 21.28 (w-2.6). After the final he said, “It was a very fast race. I felt strong going into the final, but I just got taken in the last 10 metres. I think I was too tense in the race, but I will learn from that.”

In a 17-man 1500m final it was always going to be a tactical and scrappy affair, but the British pair of   George Mills (Jon Bigg, Brighton Phoenix) and Joshua Lay (Anthony Love, Rugby & Northampton) did well to negotiate the field to finish in fifth and eighth respectively.

Mills, the 2016 European U18 champion, battled through traffic in the closing stages to post a time of 3:40.91. He summarised post-race, “It was a super, messy race and you had to try and be patient and position yourself as best you could. Unfortunately, today that wasn’t possible and although I would have liked to finish in the medals after a couple of rough weeks with results in races, I am happy to come away with fifth here.”

Lay, who clocked a time of 3:41.29 said, “I am disappointed after executing well for the first 3 laps, and I got in good positions but then I let people come past on the backstraight and I was back in fourth by the 100m, but I didn’t have it in my legs today.”

Purchase, the Berkeley University student, throwing her second furthest ever with her second round of 65.11m was delighted with her performance, saying, “It has been a really hard year, so I am very proud today. I had to quarantine for 17 days after going to and fro from the US so to do this is really special.”

Simpson-Sullivan also achieved the longest throw of her series in round two with 64.84m but was left slightly disappointed after her final throw, which looked to have gone over 65m, just clipped the cage so was marked as a foul.

She said, “I didn’t do too well in the qualification, so I was looking to do better today. But I am so pleased to be here and have my first GB vest.  Next year is going to be very competitive with lots of good girls coming through. The big goal is to be the second British woman over 70m.”

In the men’s 110m hurdles, co-captain Tade Ojora (Caryl Smith-Gilbert, Windsor Slough Eton and Hounslow) was just pipped into fourth place by one-hundredth of a second, finishing in 13.45 (-1.6) with Josh Zeller (Adrian Brown, Bracknell AC) coming home in sixth in a time of 13.76.

Ojora, the British Champion, “My start was good but towards the end I really started worrying about people each side of me instead of focusing on my own race which is upsetting. I didn’t come here for fourth, but I’ll be back.”

The women’s 100m hurdles final was another quick race on the fast Tallinn track with Anastasia Davies (John Blackie, Blackheath & Bromley) finishing in eighth place in 13.53 (-0.9).

In an extremely competitive men’s 400m hurdles final, the first five finishers all achieved personal bests including Alex Knibbs (Nick Dakin, Amber Valley & Erewash) who was fourth in a PB of 49.37, just three-tenths outside the medal places.

British champion, Alastair Chalmers (Matt Elias, Guernsey) finished sixth in a season-best of 49.80, while the winner, Alessandro Sibilio of Italy, finished in a European U23 lead time of 48.42.

Knibbs, who improved upon his eighth place at the Euro U23s two years ago, said afterwards, “That race was fast. I am amazed with that PB. I gave it my best, so I am happy with a PB.”

The women’s 3000m steeplechase was run in very high temperatures with Sarah Tait (Linda Smith, Lasswade) and Elise Thorner (Wells City) keeping with the leading group with three laps to go. Unable to stay with that pace especially in the heat, the 20-year-old Scot, Tait finished in an excellent fifth in 10:04.53, while the Wells City athlete worked hard to cross the line in eighth in 10:12.41.

Even at 8pm in the evening it was still more than 30 degrees in the stadium for the men’s 5000m race. In the A race, Tom Mortimer (Christopher Brown, Stroud) ran a determined first 3k, taking it on after seven laps until German, Mohamed Mohumed took the lead and pushed the pace.

The Briton was closed down by Icelandic and Spanish pair, Magnusson and Las Heras just before the bell so Mortimer would finish the contest in fourth place in 13:48.67, which would stand after the B race.

He said, “Knowing there was another race I needed to take it on. I knew we needed to do sub-14. I was pleased Mohumed took it out, but I couldn’t handle it in the end.”

In the women’s 200m final, Kiah Dubarry-Gay (Clarence Callender, Victoria Park & Tower Hamlets) ran 23.32 (-0.4) from lane eight to finish fifth overall in her first European final. During the morning session she enjoyed a superb semi-final to achieve a PB of 23.29 (-1.3) and ensure her final place.

Running in the second semi-final earlier in the day, Georgina Adam (Joe McDonnell, Loughborough Students) had a long wait to see if her 23.57 (-1.2) would be sufficient to advance as a fastest non-auto qualifier but with a very fast final heat it was not be.

Earlier this morning, Lucy Hadaway (Matt Barton, City of York) secured her place in Sunday’s long jump final with a leap of 6.48m in the third and final round which gave her automatic qualification and the second-longest jump from both qualification groups.

Afterward, she said, “It was a very early start so it took me a couple of rounds, but I don’t feel too tired after it and I feel I can go bigger in the final. Each jump today can be improved on technically, so I am confident tomorrow.”