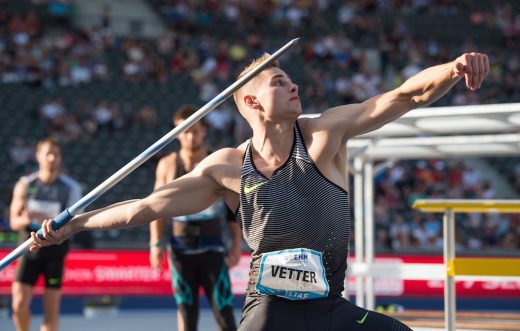 This year the German javelin aces have produced a string of exciting contests, determined to outdo one another with outstanding performances. The rivalry has been the springboard for Thomas Röhler to break the national record with the outdoor season barely begun, launching his spear to 93.90m in Doha in early May. But Johannes Vetter responded by beating Röhler at the German championships in Erfurt before improving the national record to 94.44 in Lucerne. When it came to the World Championships in London, Vetter clearly had the upper hand with his impressive victory while Röhler only missed the bronze medal by seven centimetres.

The German pair will certainly not have everything their own way. The ISTAF organisers have included the Olympic silver medallist Julius Yego of Kenya in the field. “Thomas and Johannes are two outstanding athletes. The javelin will be a top attraction of ISTAF, as it was last year,” said the meeting director Martin Seeber.

Martin Seeber had more good news to announce with the participation of the World 200m champion Dafne Schippers, fresh from her triumph in London. The Dutch athlete is confirmed as part of a Dutch sprint relay quartet. Among their rivals will be a German squad including Gina Lückenkemper. “After an interval of seven years we have brought back this exciting team competition to ISTAF’s schedule. The fans can look forward to a thrilling race in the most beautiful athletics stadium in the world. I am delighted that Dafne Schippers, one of the world’s fastest women, will once again be competing at ISTAF,” said Seeber. Also included in the program are the women’s 100 and 200m but confirmation on which event Schippers might run is still awaited.

The women’s long jump is also stacked with talent. The line-up includes Darya Klishina of Russia, currently based in the USA and Ivana Spanovic of Serbia. Both were key performers in a fine contest at the World Championships in London with Klishina finishing second with 7.00m and Spanovic fourth. Klishina only missed the gold medal by two centimetres and Spanovic was just one centimetre short of the bronze with her best effort of 6.96m.

Klishina was permitted to compete as a “Neutral Athlete” at the World Championships in London despite the current ban on the Russian Federation because she was able to prove that she had been regularly tested outside of her own country’s Anti-Doping system. The long jumper has lived for four years in the USA and, like her rival Ivana Spanovic, also works on occasion as a model.