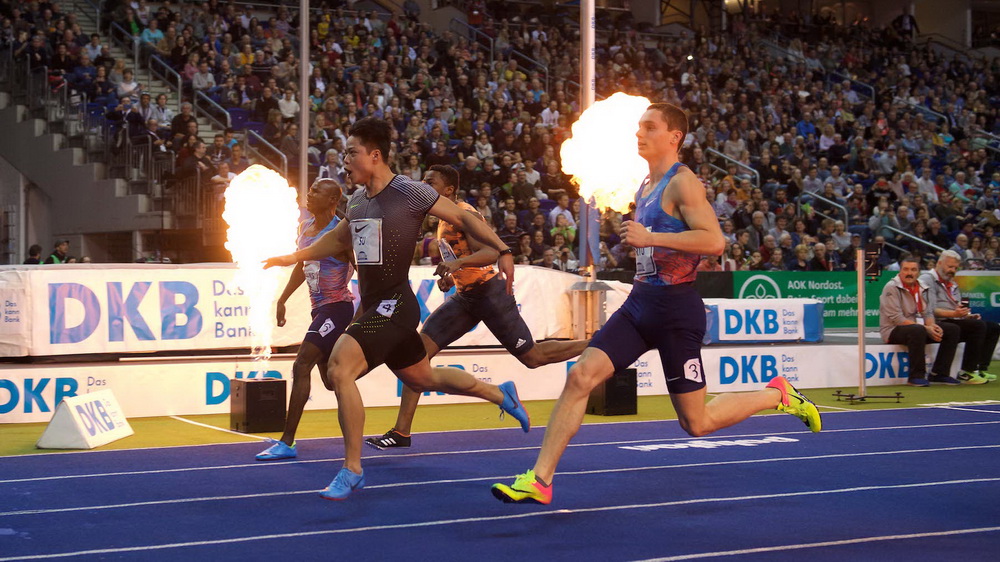 Lisek ahead of Braz and Lavillenie, Pinto surges to 7.08 world lead in 60 m

Tatjana Pinto and Piotr Lisek produced the highlights at the ISTAF INDOOR in Berlin. In front of 12,100 spectators in the capital’s Mercedes Benz Arena the German sprinter took the 60 m with 7.13 seconds after producing a world lead of 7.08 in her heat before. Piotr Lisek showed he will be ready to go for what would be his first global title at the IAAF World Indoor Championships in Birmingham (1st to 4th March). The Pole Vaulter from Poland took his event with 5.83 m.

While China’s sprinter Su Bingtian clocked a strong 6.55 in the 60 m Britain’s Andrew Pozzi showed fine form as well. He took the 60 m Hurdles with 7.58 seconds. Alina Talay of Belarus won the women’s hurdles with 7.89. Germany’s Nadja Käther took the Long Jump with 6.56 m and there was an upset in the final event of the night when Austria’s Lukas Weisshaidinger was first in the Discus Throw with 63.91 m.

Last year’s ISTAF INDOOR winner Piotr Lisek did not start well in the Pole Vault when he only cleared his first height of 5.45 m at his second attempt. However, the 25-year-old then went from strength to strength, clearing 5.60 m, 5.70 m and 5.78 m all with his first jump. There was already some pressure on world record holder Renaud Lavillenie of France, who passed 5.78m, when Lisek took this height in his first attempt. However, the Pole added more when he cleared 5.83 m with his second attempt. Lavillenie missed twice. So he now had to clear a world-leading 5.88 m to win. But he had only one jump left after he passed his third attempt at 5.83. It did not work for the Frenchman, who finally finished third with 5.70.

Olympic Champion Thiago Braz was second with 5.70. He had cleared his three first heights all at his first attempt (5.45 m, 5.60 m 5.70 m) before failing at 5.78 m while Lavillenie needed two jumps to go over 5.60 m. Raphael Holzdeppe took fourth with 5.60 m and Canada’s Shawn Barber followed in fifth with the same height.

„I have now won this event for the second time. I like to come here, the crowd is awesome and the people support me,“ said Piotr Lisek who established a season’s best and is currently number two in the world behind Lavillenie (5.86). “My next competition will be in Cottbus and then I will prepare for the World Championships in Birmingham. I want to go there and I want to win. I also look forward to the Berlin European Championships in August. I live in Stettin, so it will not be far for my fans to come to Berlin and support me.“

China’s Su Bingtian showed that he will be ready for the World Indoors as well. He took the 60 m with a fine 6.55 seconds, the fastest time by an Asian sprinter this winter so far. „The race turned out really fine for me. It felt good competing at ISTAF INDOOR,“ Su said. Italy’s Filippo Tortu was second in 6.62 seconds – a personal best time, which he had already produced in his heat.

At the age of 41 Kim Collins (Saint Kitts and Nevis) continues to go strong. The world 100m champion from 15 years ago ran 6.64 in Berlin and placed third in the final. “Last year, the London World Championships were my last championships outdoors. So this year Birmingham should be my last championships indoors. I do not know about outdoors yet. My son will be 20 years next year. I have had an extremely long career. But I still love it,“ said Kim Collins.

Britain’s Andrew Pozzi showed good form in the build-up to Birmingham. The reigning European indoor champion won the 60 m hurdles with 7.58 from Balazs Baji. The Hungarian, who had won at the ISTAF INDOOR a year ago, clocked 7.61. Aurel Manga of France was third in 7.65. „I am very happy to have won here. It was my first ISTAF and I enjoyed the great atmosphere. It was a tough race,“ said Pozzi.

After attaching safety nets the Discus Throw was the final event of the ISTAF INDOOR. It all pointed towards a German victory by Daniel Jasinski, who had been in the lead with a second-round throw of 61.86 m. But in the final few throws of the competition that all changed. First Berlin’s local hero Robert Harting took the lead with 62.32. However an upset for the London Olympic Champion followed when Lukas Weisshaidinger of Austria produced a great 63.91. Daniel Jasinski then could not respond and had to settle for third place. Belgium’s Philip Milanov took fourth with 60.82. „I did never expect to win this one. It is unbelievable to beat Robert Harting,“ said Lukas Weisshaidinger.

Tatjana Pinto showed great early season form on Friday night. The 25-year-old sprinter took the first heat of the 60 m with a world lead of 7.08 seconds. She was only 0.01 off her personal best and just 0.08 away from Dutch meeting record holder Dafne Schippers, who ran 7.00 at the ISTAF INDOOR two years ago.

In the final Pinto could not quite match her time, but she just edged to victory in 7.13 seconds, beating Mujinga Kambundji of Switzerland who crossed the line in 7.14. In a very close race Michelle-Lee Ahye (Trinidad and Tobago) was third in 7.16 while Lisa Mayer took fourth with 7.17 and fellow-German Gina Lückenkemper followed in 7.19. Marie-Josee Ta Lou (Ivory Coast) had to settle for sixth with 7.22.

„I really looked forward to this meeting because of the tremendous atmosphere. I was able to stay relaxed and concentrated on myself. My big goal are the World Indoor Championships. It was a great start to my season in Berlin,“ said Tatjana Pinto.

Hopes for a German victory in the 60 m hurdles did not materialize as Alina Talay surged ahead. The multiple European champion from Belarus ran a fine time of 7.89 seconds. Germans Pamela Dutkiewicz and Cindy Roleder took second and third with both given the same time of 7.93. Sharika Nelvis of the US followed in fourth with 7.94.

„Today was my first international competition in 2018. I was really nervous. But now I am really satisfied coming first with such a time in a strong field,“ said Alina Talay. Another one who was very happy was Cindy Roleder who managed a fine comeback on international stage after a long injury lay-off. „I am really satisfied with my race. To run below eight seconds after my comeback that is really amazing for me. I never dreamt of running that fast that early in the season. I would not mind my season to continue like that,“ said Roleder.

Performances in the Long Jump were slightly below par. There was a German winner here with Nadja Käther, who achieved 6.56m in round three. Cuba’s Yariadmis Arguelles took second with 6.47 while Alexandra Wester of Germany was third (6.42). The US Olympic Champion Tianna Bartoletta had to settle for fourth with 6.38. She did start in the 60m in between. But a fifth place in her heat with 7.33 was not enough to advance into the final.

More information is available at: www.istaf.de