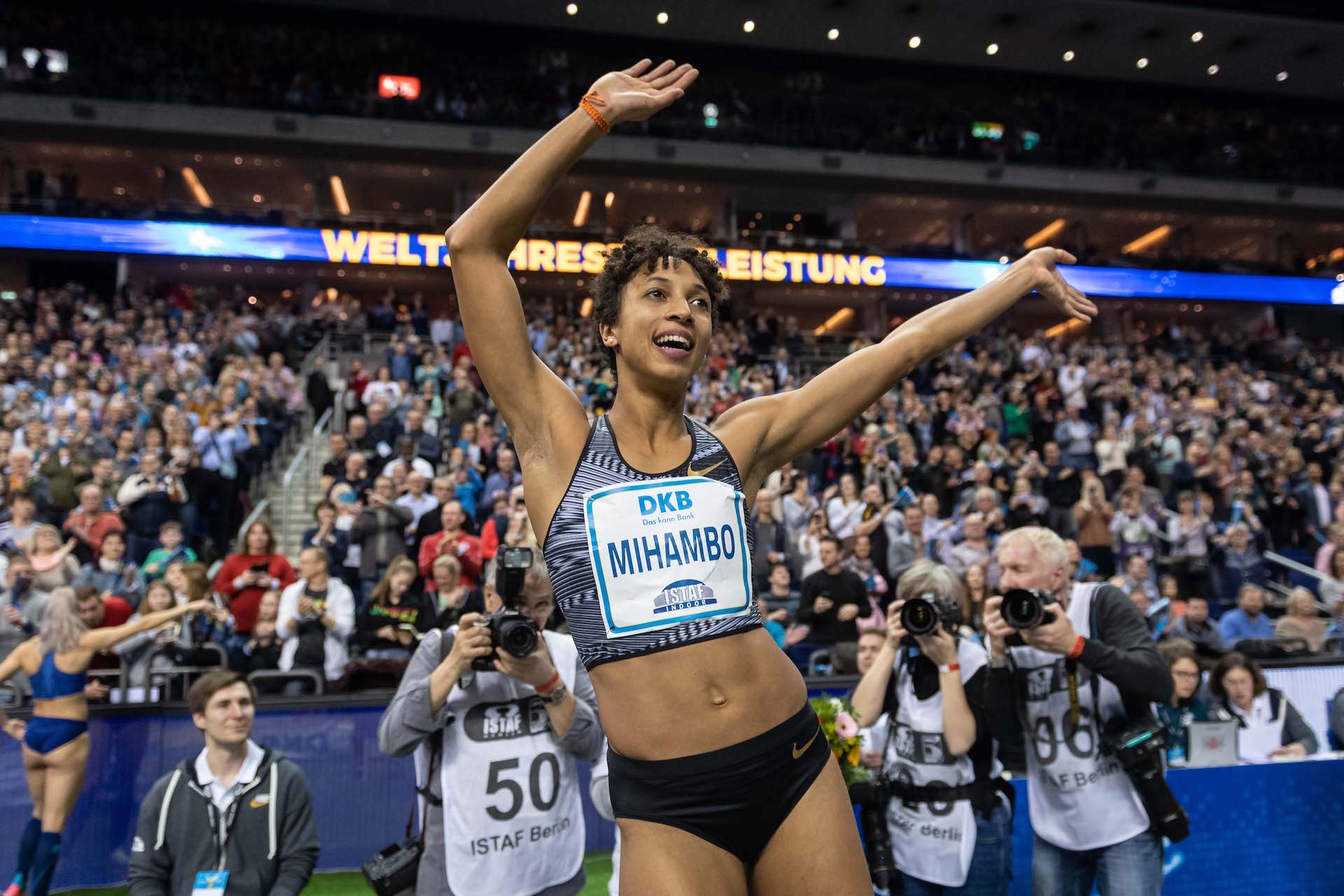 Malaika Mihambo stunned 12,500 spectators at the ISTAF INDOOR in Berlin with a phenomenal last attempt of 7.07 meters. Germany’s long jump world champion from Doha 2019 broke her own meeting record, took the world lead with the first 7 meter jump of the year and moved up to tenth place on the indoor alltime list. She crowned another thrilling indoor athletics event in front of a sell-out crowd in Berlin’s Mercedes Benz Arena. The biggest crowd of any athletics indoor event celebrated a surprise local victory as well: Berlin’s Lisa Marie Kwayie took the 60 m in 7.25 seconds. Emre Zafer Barnes of Turkey won the men’s dash with 6.60. There was an upset in the men’s Pole Vault as France’s Valentin Lavillenie and Dutchman Rutger Koppelaar shared victory with a height of 5.61 m.

The women’s long jump competition was the jewel in the crown of the meeting in the German capital. After three rounds Malaika Mihambo was in the lead by the closest of margins. She had jumped 6.68m as had Nastassia Mironchyk-Ivanova of Belarus. But Mihambo’s second best attempt was better. However the German then moved clear. She  produced a series of 6.68, 6.67, 6.41, 6.84, 6.73 and 7.07. Ese Brume of Nigeria, the World Championships’ bronze medallist, took second with 6.79 while Mironchyk-Ivanova was third with 6.75.

“I trained well and knew it would be possible. However it was a difficult competition for me since my last few steps didn’t not really fit well during my first attempts. So I am really pleased that it worked well at my final attempt and that I did manage to jump seven meters here tonight,“ said Malaika Mihambo, who also established a meeting record and a personal indoor best. A year ago she had won this event with a meeting record of 6.99 m. Since the Millennium only two other women have jumped further than the 26 year-old German: Brittney Reese of the US and Serbia’s Ivana Spanovic. And Mihambo’s jump on Friday night was the furthest for almost three years indoors. „The spectators really helped me. I received standing ovations during my final attempt, which helped propelling me beyond the seven meter mark. The atmosphere ist really incredible,“ said Mihambo.

The atmosphere had already reached boiling point a little earlier. Sensationally Berlin’s Lisa Marie Kwayie took the 60m with 7.25 in what was her season’s debut. She just held on when Klara Seidlova finished strong, but could not get past her. The Czech clocked 7.26. Yasmin Kwadwo of Germany was third in 7.32. „Of course I wanted to perform well in front of my home crowd,“ said Kwayie.

Nigeria’s Tobi Amusan won the 60 m Hurdles in 7.89 after a dominant display. The 22 year-old was ahead of Finland’s Nooralotta Sezier (7.99) and Nadine Visser Netherlands/8.01).  “This is a superb atmosphere and the pyro is great. It is amazing, I get a lot of energy from that. This was my best indoor season so far, it was my last race today. I plan to start the outdoor season at the end of March,“ said Tobi Amusan.

France’s Valentin Lavillenie and Dutchman Rutger Koppelaar surprisingly shared victory in the Pole Vault with a height of 5.61 m. Valentin’s brother Renaud Lavillenie, the former world record holder and Olympic Champion, was back in seventh with 5.41 m while reigning Olympic Champion Thiago Braz of Brazil had no valid attempt at 5.51. Norway’s Pal Haugen Lillefosse took third, having cleared 5.61 as well.

Valentin Lavillenie missed 5.71 agonizingly close with his last attempt. “I thought I made it, the jump was good. But then I made a stupid mistake and did not pay attention to my upper body and the bar fell,“ said Valentin Lavillenie who managed to finish ahead of his prominent brother for the second time in a row, which never happened before.

Turkey’s Emre Zafer Barnes showed strong form when taking his heat in 6.64. And he then dominated the final as well, winning with 6.60 from Aleksandar Askovic (6.68) and fellow-German Michael Pohl (6.68). “It was a good evening for me with two season’s bests,“ said Barnes. Britain’s James Dasaolu was sixth with 6.78 after clocking 6.75 in his heat. The European 100 m champion from 2014 comes back after rupturing his Achilles tendon.

Taking the lead after around 30 meters Konstantinos Douvalidis of Greece won the 60m Hurdles final in a time of 7.67 seconds from France’s Aurel Manga (7.70) and Germany’s Gregor Traber (7.72). “After a bad start I still achieved a good time. I enjoyed to run in this arena with all these people,“ said Douvalidis.

Shannice Craft throws 64.03 in Discus duel with the men

The men took revenge for last year and won the Discus duel against the women with a score of 25:24. Germany’s Shannice Craft showed strong form in winter: With her very first attempt she achieved a meeting record of 64.03 m which is the furthest throw by a woman ever indoors. There are of course no world records for indoor discus throwing. Romania’s Alexandru Alan Firfirica had the best throw among the men with 62.27.