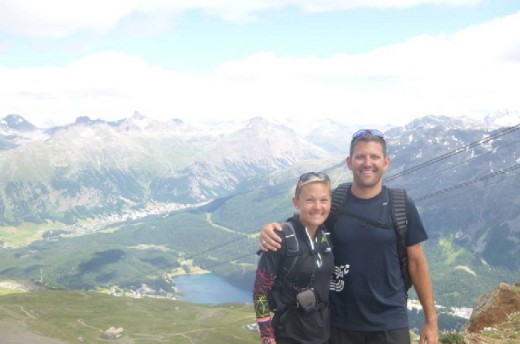 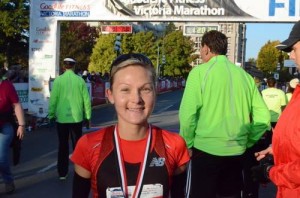 Canadian Olympian, Hilary Stellingwerff, who specialises in the 1500 metre distance is expecting a baby in June of 2014. From their vacation place in Patagonia, Chile, Hilary and Trent Stellingwerff announced the exciting news in their annual Christmas e-letter to friends and family on December 26th. “Well, we’re excited to announce that we will be having our first baby at the end of June on our 9th anniversary! We were hoping this would be the year and everything has worked out”.

Stellingwerff won the October 13th running of the GoodLife Fitness Victoria Half Marathon in the time of 1:16:11; it was her debut at the distance. She ran the race – unbeknownst to her at the time – pregnant, she said, “I’m feeling great and in fact, didn’t realize I was a month pregnant when I ran the half-marathon in October until a few days later.” She added, “I’ve been very lucky not to have any sickness and although tired, I’m still been able to run six-days-a-week with a couple of easy workouts and a bit of weight training. I don’t expect this to last throughout, but I’m taking advantage while I can!”

The Stellingwerffs told Athletics Illustrated that they are having a boy. Trent added, “We are looking forward to this next stage in our life. So my 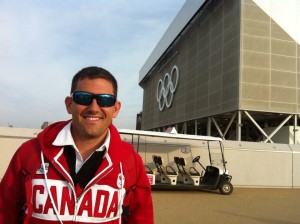 reputation of incredible speed with email replies is going to end come June.”

Hilary, originally from Sarnia, Ontario, (the two) relocated to Victoria in 2012 – by way of Lausanne, Switzerland. She has raced in the 2012 London Olympic Games, Commonwealth Games, IAAF World Cross Country Championships, World Track and Field Championships and the World Indoor Championships. Dave Scott-Thomas and Trent coach her. When not representing Canada, she runs for Speed River Track and Field Club.

Stellingwerff was an academically decorated student who made the Dean’s list at Cornell University. In 2006 he took a position in Switzerland for the Nestle Research Centre (Powerbar) as a Senior Research Scientist in Sport Nutrition, Energy and Performance. Stellingwerff has also served as the Nutrition and Physiology Consultant for Athletics Canada. He is a Senior Physiologist working with the Canadian Sport Centre Pacific.

Here is her post-race interview from GoodLife Fitness Victoria Half Marathon: