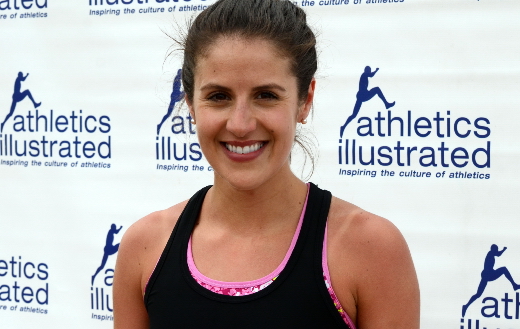 The 2016 UBC Open took place today at the Rashpal Dhillon Oval under partially cloudy skies and near windless conditions.

The Achilles Cup portion of the event, a dual meet between cross-town rivals, The University of British Columbia Thunderbirds and the Simon Fraser University Clan was won by SFU; however, the cup wasn’t taken without a fight. The teams battled hard over several events to a score of 131 to 99, respectively.

The head-to-head scoring is located, here.

Mid-way through the meet, Director and UBC Head Coach Laurier Primeau honoured past competitors of the meet, who have achieved Rio Olympic standard, including 800-metre runner and 2012 London Olympian Jessica Smith, high jumper Mike Mason, who won bronze at the 2014 Glasgow Commonwealth Games and Liz Gleadle, Olympic Javelin thrower. Natasha Wodak was also honoured, however, she was unavailable, she owns the national record for 10,000m.

Philip Ireri is from Nairobi, Kenya. So one would expect him to compete over the middle-distances or long distances, however, like countryman Julius Yego who competes internationally in the Javelin throw – an unusual event for a Kenyan – Ireri  is of all things a Kenyan sprinter. Today, he helped his UBC team win the 4 x 100m relay in the time of 42.22, running anchor. Team-mates Stephen Abosi, Mark Coles and Mihailo Stefanovic helped defeat the Clan who finished in 43.08. Eric Hamber Secondary finished third in 45.87.

The first race of the day saw Emma Chadsey take on Clan team-mate Dana Townsend in the 2000m steeplechase; a shorter race, by one kilometre for both athletes, than what they are used to.  Chadsey prevailed in the time of 7:30.00 to Townsend’s 7:36.18. Asked about the higher effort level due to the shorter distance Chadsey said, “Yeah, it is a little harder, also it was the first race of the season. I will be doing the 3,000msc, which I am more used to in a meet in San Francisco next week.”

The men’s and women’s 200-metre dash was up next, with Clan athlete Valda Kabia winning in the time of 25:28 over Katherine Lucas and Chantel Desch, who finished in 25.68 and 35.72, respectively. “That was pretty good. I was looking for at least that today, but I am happy with the result,” Said Kabia.
Jerome Blake of the Okanagan Athletics Club won the men’s race easily. Blake is looking to become a Canadian citizen and continues to deal with immigration as the process evolves, hence his representing the interior-based club. Blake finished in the time of 21.66 over Quinn Litherland and Robbie Gallaugher, who both ran unattached and finished in 22.50 and 22.60, respectively. Blake doubled and later ran the 100m, winning in the time of 10.64.

Erica Digby won both the 1500-metre and 800-metre events in the time of 4:30.89 and 2:12.69. The former Idaho Vandal was pleased with the execution, however, was looking to go ever-so-slightly faster. She is moving up to the 5,000-metre event next week at a meet at Stanford University.

Digby does not have eligibility to compete for a university, so she represented the Vancouver Thunderbirds Track Club.

During the final track event, Evan Elder was seeking the NAIA standard of 31:15 for the 10,000m distance, to run nationals. He won in the time of 30:59.48 He and Jesse Hooton took turns sharing the lead throughout the race. With about four laps to go, a gap appeared and Elder began to slowly increase the lead.

Asked if he was getting worried with Hooton still with him so late in the race Elder said, “Well he is a good athlete for sure. I have to respect him, especially that late in the race, but I was really just looking to get under the standard.”

Elder was born Halifax, grew up in Christchurch, New Zealand and moved to Vancouver to attend UBC. The NAIA event takes place May 14th in Gulf Shores, Alabama.

During the men’s 1500m event, two SFU runners, Marc-Antoine Rouleau and Cameron Proceviat, went 1-2 in the time of 3:54.00 and 3:54.21, approximately six and seven seconds off of their personal bests. The race offered several lead changes, with John Gay of UBC taking the pace out at sub-3:50.00, but he couldn’t hang on as he ended up finishing sixth in the time of 3:55.24, a new personal best by nearly four seconds. John Corbit, running attached finished third in the time of 3:54.69

“I was pretty happy with the performance. It is the first race of the season, so it is early and it was a bit cool out,” shared Rouleau.

Proceviat tried to get into the double win category today too, however, Dylan  Freinhofer, of Simon Fraser wasn’t going to have any of it, taking the race in 1:54.01 to Proceviat’s 1:54.22. Third place finisher was Dean Ellenwood of the Langley Mustangs; he finished close behind in the time of 1:54.42.

Full results of the meet can be found, here.