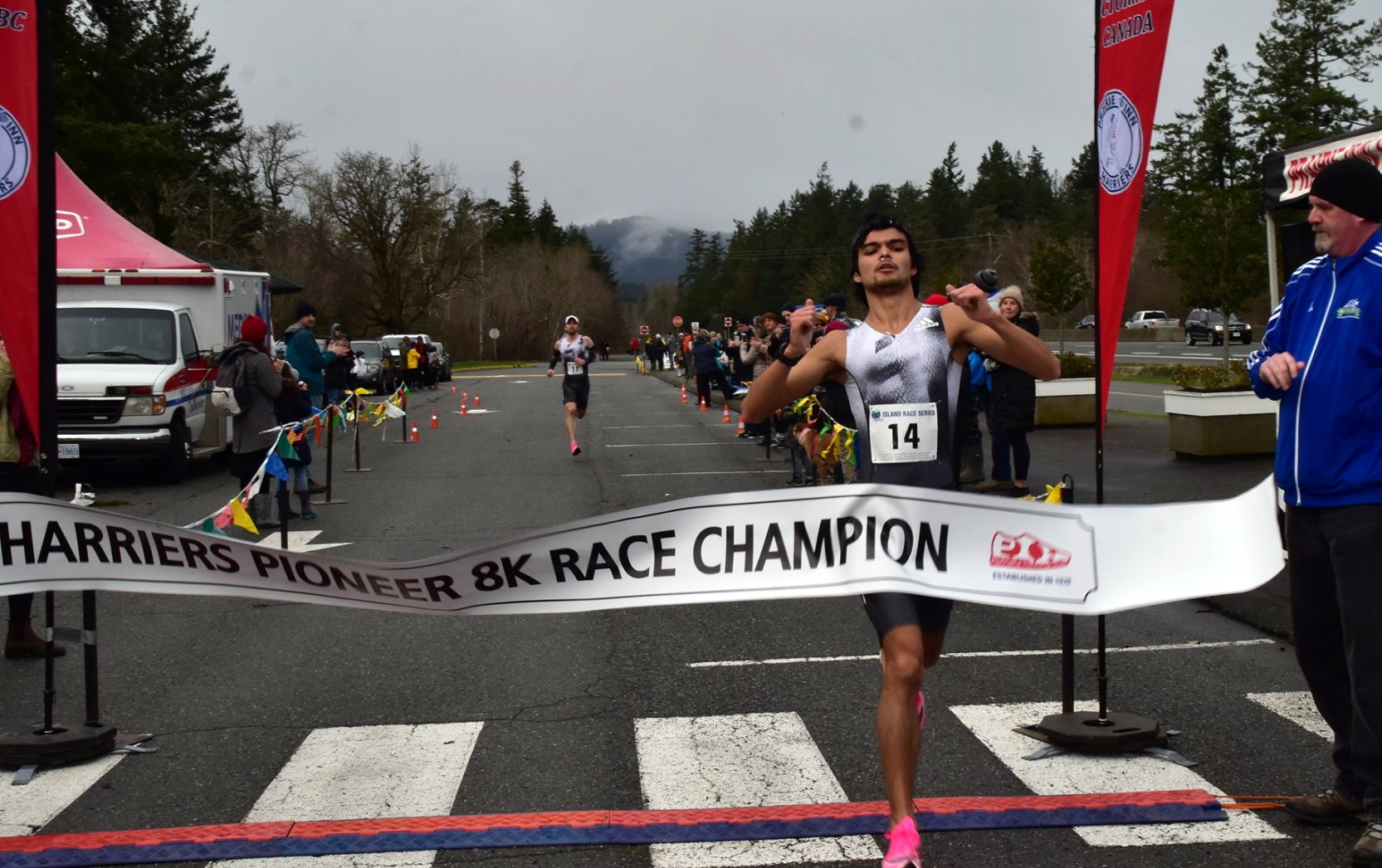 They came, they dominated, and they stayed as the ferry system was shut down for the rest of the day due to a pending storm.

James Lam, former Trinity Western University Spartans athlete, wasn’t too happy with his form at the national cross-country championships in Abbotsford in December. What a difference a few weeks of training can make as he won in the time of 24:23.

“I was looking for a top-three placing and around that time, maybe a bit faster,” said Lam. “But I am happy with the race, considering the wind.”

“We went after it because it gives you a bit of a team feeling and you can make out where your teammates are in the race,” said Johnston, who took the lead early in the race and dragged the field out at approximately a 3:02 pace.

“It was good. I didn’t quite have the fitness to stick with these guys at the end, but I am just back after a break to take another serious run at cross-country,” said De Schiffart, who is originally from Nanaimo. He was racing off cross-country and mountain biking fitness.

“I was burnt out from running and came back for cross country but wasn’t happy with the results, so I will put in another good effort with these guys.”

It was Lam’s first win during the Vancouver Island Race Series. Johnston and De Schiffart finished in 24:26 and 24:38, respectively.

“This was good for both Lam and Johnston,” said Coach Mark Bomba. “We have been working on some mental things as well as tweaked some of his training. Lam’s workouts have indicated for awhile that he is capable of what he did today.”

“I have a big schedule coming up with the Houston Half-Marathon next Sunday, as well as the 2020 Pan Am Cross Country Cup in Victoria on February 29 as well as the New York Half Marathon.”

“It’s no secret that I want to go sub-70-minutes and that I would like to take the Canadian record. I would also like to run fast enough to qualify for the World Half Marathon Championships,” added Wodak.

The national record is currently held by fellow Vancouver runner Rachel Cliff, who also owns the current national marathon record having run 1:10:06 and 2:26:56, respectively. Both set in 2019.

Natalia Hawthorn finished in second place in her first ever 8K road race. She stopped the clock at 26:49 while Julia Howley crossed the line in third at 28:34.

Hawthorn will be competing at various distances this winter and over the spring. Currently she is looking get below the 16-minute benchmark at an upcoming University of Washington indoor meet on their 300m track. The former University of British Columbia athlete will also compete in the 1500m distance. Her best is currently 4:13.65.

If Lam’s personal best and comeback from a tough cross-country season, or Wodak’s second best 8K don’t qualify for the race performance of the day then perhaps Victoria’s Jim Finlayson’s does. The 45-49 age-group runner was the first master. He crossed the finish line in the time of 25:32 and finished seventh overall. All three athletes set new event age-group records.

As did Maurice Tarrant, who has won hundreds of local races in his various age-categories over the years. He turned 90 on Friday and ran Sunday to finish in the time of 1:13:09.

Shoestrings: Also, at the race was Sarah Inglis, who trains with the Langley Mustangs Endurance Group. She is a Scottish runner who will be trying to qualify for the World Half Marathon championships next Sunday alongside Wodak. The Scottish record is 1:08:42 and is held by Liz McColgan. She has also run 1:07:11 on a non-certified course. Inglis and Wodak will both be hoping for a sub-1:10:00, as will Cliff.

Other Canadian in Houston are: