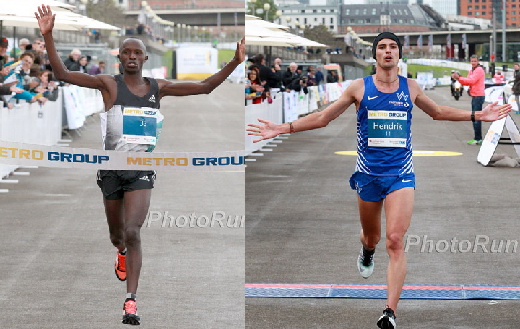 Japhet Kosgei won the 14th edition of the METRO GROUP Marathon Duesseldorf. Taking into account the weather conditions with cold temperatures, wind and a couple of hail showers he clocked a fine time of 2:10:46. Defending champion Marius Ionescu of Romania took second with a personal best of 2:13:00 while Germany’s Hendrik Pfeiffer ran a superb debut in difficult conditions. The 23 year-old was third, but more important qualified for the Olympic marathon with a time of 2:13:11. Hungary’s Zsofia Erdelyi dominated the women’s race, winning with 2:35:37 from Beverly Ramos of Puerto Rico, who clocked a national record of 2:36:31. Belgium’s Hanna Vandenbusche was third in 2:39:50.

Adding other running events staged parallel to the marathon a total of around 17,000 runners entered the METRO GROUP Marathon Duesseldorf. „We are really happy and proud that Hendrik Pfeiffer snatched a ticket to Rio today. That was a superb bonus to a great event,“ said Race Director Jan Winschermann.

For a large part of the race the leading group ran a pace that pointed towards a finishing time of around 2:09. Running behind a pacemaker Kenyans Mathew Bowen, Francis Lagat and eventual winner Japhet Kosgei passed the half way point in 64:25. The fastest man in the field had already been dropped at 15 k and was trailing the first group by almost 90 seconds at half way: Philipp Sanga, who has a PB of 2:06:07 and hoped to attack the 2:07:48 course record, had problems in the cold and windy weather. He later dropped out. In contrast Japhet Kosgei ran strongly in the uncomfortable conditions. The Kenyan dropped his rivals at 23 k and built a commanding lead. It was only in the final section of the race when he slowed a bit and missed a sub 2:10 time.

„Of course it was very cold today. But the course is good. In better weather conditions I could have run 2:08 today,“

said Kosgei, who has a personal best of 2:08:08. While Sanga had been a late entry to the Metro Group Marathon Duesseldorf the same applied to Japhet Kosgei. The 28 year-old, who has been known as Collins Kosgei Tanui before, was supposed to run the Warsaw Marathon today. However his visa was somehow not valid for Poland. „I only found out on Tuesday that I would not be able to run in Warsaw. So I was very grateful when I got the chance to run in Duesseldorf instead,“ said Kosgei, who hopes to improve to 2:06 in the future. „I would very much like to run one of the big German autumn marathons in Berlin or Frankfurt this year and improve my time.“

The most surprising performance of the day came by a runner born in Duesseldorf, who now lives not far away from the city and competes for Wattenscheid. Against all odds Hendrik Pfeiffer booked a ticket to Rio. With the help of pacemakers he achieved a debut time of 2:13:11. While the weather was far from ideal he additionally suffered of a muscle problem in his lower leg during the final week before Duesseldorf. „I could barely walk some days ago, but today I had no problems. I was a bit sceptical before the race. However everything went according to plan,“ said Hendrik Pfeiffer. „I have to thank my pacemakers, because they did a tremendous job.“

In the women’s race Zsofia Erdelyi and Beverly Ramos left behind the other contenders early in the race. They passed through 10 k in 36:42 and were already 40 seconds ahead. It was around the 20 k mark, when 28 year-old Hungarian Erdelyi, who had a personal best of 2:36:56, took the lead. At the half way mark, which she passed in 1:17:51, she was already 12 seconds ahead of Ramos.

While Erdelyi won in 2:35:37 second placed Ramos beat her own national record by more than five minutes with a time of 2:36:31. The runner from Puerto Rico had a PB of 2:41:56 from her debut in New York last year.