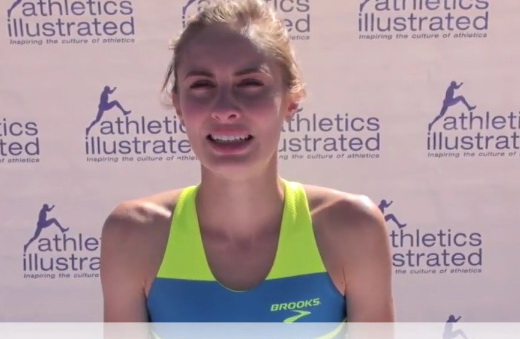 Some may have seen Jenna Westaway’s national indoors 800-metre record coming after her indoor 1000m record performance of 2:37.04 from the David Hemery Valentine Invitational in Boston on Feb. 8. It was a bit of foreshadowing, but the 800, is technically-speaking a better performance.

Sunday, Feb. 24, Westaway became the sixth Canadian all-time to run the 800m distance under two minutes. All other sub-two-minute 800m performances have been on the outdoor 400m track, she accomplished the feat on an indoor 200m track in Boston – a tougher ask.

The 24-year-old Calgary native’s best outdoors is 2:01.61, it’s was a big jump in performance. Expect her to go well under the “2” outdoors this spring.

The race itself wasn’t even close in terms of the event, as the second place finisher, Claudia Sanders finished in the time of 2:01.08. Maïté Bouchard was third in 2:03.59.

Westaway, who is currently a graduate assistant coach with the University of Guelph may compete for the Gryphons at the U Sport indoors national championships. She previously competed for the Calgary Dinos.

She has qualified for nationals, which will be taking place at the University of Manitoba in Winnipeg, MAN March 7th to 9th. The meet takes place in the James Daly Fieldhouse in Max Bell Centre.