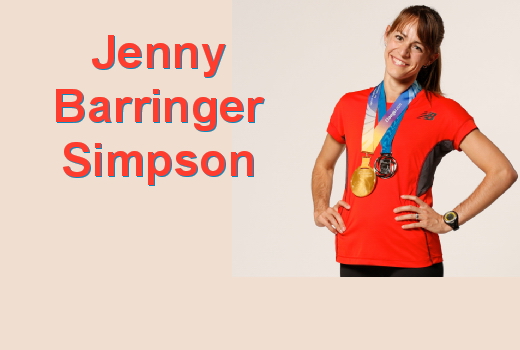 Jenny (Barringer) Simpson of Oviedo, Florida is one of the top 1500m runners in the world. She won a gold medal at the 2011 IAAF World Track and Field Championships that took place in Daegu, Korea and has competed in the 2008 Beijing and 2012 London Olympic Games.

Simpson has run the 54th fastest 1500m all-time, while only eight active women have run faster than Simpson, including sanctioned multi-time Turkish drug cheats Asli Cakir-Alptekin and Süreyya Ayhan-Kop. All-time the first four performances that are an unearthly 3:50.46, 3:50.98, 3:51.34 and 3:51.92, were run by athletes that were coached during the Ma Junren era. Junren was fired after at least six of his athletes failed drug tests. Of the 54 faster times that have taken place, nearly half or 25 of them are from athletes who were sanctioned for doping violations or for refusing to take tests or were part of the Junren group. Therefore her 3:57.22 personal best 1500m time stands out truly as a world-class performance.

The 28-year-old Simpson has demonstrated excellent range competing at a top-level from the 800m to the 5,000m distance. She has set three personal bests during the 2014 season, one each in the 1500m, 3,000m and two-mile indoor distances. Her personal bests are:

Christopher Kelsall: What was life like growing up in Oviedo? Is there a healthy sporting environment in town?

Jennifer Simpson: I got involved in running by the suggestion of a PE teacher in elementary school. I’m so fortunate that in Oviedo there were running groups for school kids as young as the first grade! Once I got to middle school I was introduced to the road racing scene organized primarily by Track Shack, the Orlando run specialty store. They had a vibrant and growing running community at the time. When I visit today it’s even stronger and the community of runners specifically organized by Track Shack is so healthy and happy! Once I moved on to high school that’s when I really began to race the mile and two mile on the track.

CK: What, if any, other sports did you grow up playing?

JS: I didn’t really play any other sports. I started running at such an early age and was hooked. But I did compete in equestrian sports from a very young age until high school. My parents still have horses today.

CK: Having studied Political Science and Economics at Colorado, will you put your education to work in a related field? Do the subjects draw your interest outside of school?

JS: I really enjoyed my degree and worked really hard for it in school. I have gone on to do a few volunteer projects since graduation where I felt like my education was very applicable. I’m still very interested in these subjects and am sure that interest will play a big role in whatever I choose to do when my running career is over.

CK: Five years ago, you told Runner’s World Magazine, “I really want to be her someday. I want to be coming back to my room with a medal someday.” At that time you were talking about Shalane Flanagan. You have been winning at an international level, for example during the 2011 Worlds you won gold and have performed well in the Diamond League. Are you there yet? If so, what is next?

JS: I hope to always have role models that I aspire to be like and I hope I never look in the mirror and decide this is all I want to be. I have achieved many of my dream goals in this sport but it has only inspired me to try to do even more. I just hope that as I someday begin to wrap up my career (hopefully a long time from now!) that I’m able to pass the inspiration onto a new generation of great American runners.

CK: You had a standout University career running under the legendary Mark Wetmore. Wetmore was complimentary towards your high school training at Oviedo, from where you were recruited. Can you describe the key elements to your high school and university training program success?

JS: The most important thing about my experience in high school was that I was given the space to truly love the sport. I had wonderful coaches who encouraged my talent and work ethic but never put undue pressure on me. We just had a lot of fun and learned along the way! Transitioning into college I gradually took on more miles, higher intensity and of course, more pressure. But the key was that Wetmore really managed all of that additional development in a way and timeline that made it possible for me to really grow into it.

CK: Being consistently successful in high school, university and now at a world level, do you ever feel a sense of complacency creeping in? Or are you driven regardless?

JS: Each year there is a new class of incredible talent entering our sport. This was true when I was in high school and is still true at the elite level. They really do push me to keep training harder to be better each year. So far there hasn’t been a moment in my career when I’ve felt like I could (or would want to!) sit back and coast.

CK: Having run personal bests in both the 1500m in July and then in the 3,000m in September, does this make plans to specialise difficult?

JS: I hope to run a range of distances each year and especially touch on the longer side because I do well there. But, for now the 1500m is my primary focus.

CK: Many runners reference consistency in training and training injury-free to their successful periods of racing. You have had several years of excellent performances. Have you been able to avoid injuries? What do you think is your key to avoiding injury?

JS: First, I think I’m maybe a little lucky that I have good mechanics and a durable body. But of course it cannot be overlooked that good recovery and injury prevention is absolutely essential to staying healthy while training at a high level. The priority must be a healthy diet and consistent sleep. Second to that there are regular strengthening exercises, drills, rehab, massage, and medical attention to the smallest of pains. I think you can avoid a lot of pain, days off, and major injuries by taking care of your body on a regular basis. That being said, not all injuries can always be avoided. When you do face an injury, as we all have, I think it’s important to take the professional advice to get 100% healthy before pushing your body again.