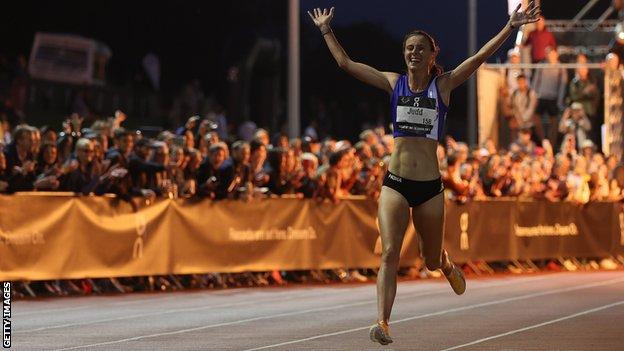 Yemaneberhan Crippa of Italy and Great Britain’s Jess Judd won the marquee events at the Night of the 10,000m PBs in London Saturday night.

With the win, Judd qualified in the 10,000m event for this summer’s 2022 Eugene World Championships in Oregon.

For those who can’t make it! Livestream details. Tell your friends!

Fellow Briton and Olympian Amy-Eloise Markovc, who competed in the 5,000m in Tokyo, finished second, missing out on the qualification time by 57/100ths of a second. She clocked a 31:25.57 — heart-breakingly close. However, the season is far from over.

Finishing in third position was Samantha Harrison who clocked a 31:30.63. All three ran faster than the European Athletics Championships also happening this summer in Munich, Germany. The standard for that event is 32:20.00. In fact, four athletes ran under the European Championships standard including Scot, Sarah Inglis with her 31:39.60 fourth-place finishing and a big new personal best. The 30-year-old’s best was from 2019 in Vancouver, BC at 32:11.42.

Inglis, who was living in Greater Vancouver and working as a school teacher gave up her position to train with Puma Elite, based in North Carolina.

“So far it’s been great here. I settled into a new house, training group, and coaches! Making the most of the opportunity,” shared Inglis shortly after her move. So far, it appears to be paying early dividends.

Sam Atkin finished second but missed the World Championships standard by less than four seconds. It was a new personal best for Cairess.

For Crippa, it was a run six seconds outside of his personal best which is the Italian record set during the 2019 Doha World Athletics Championships at 27:10.76.

Brilliant race by Dean Casey of @Ennistrack who smashes the Irish U20 10,000m record in Highgate – his 28:57.34 taking 26 seconds off the record set by @Abdellaadjel_ in March.

The Night of the 10,000m PBs is once again a model to all others in how to stage an event. pic.twitter.com/oZidvfSdzL

The European Championships standard is 28:15. Eight athletes ran faster than that time. Six of them compete for European countries. All 26 men who finished, clocked times under 30-minutes. Nineteen under 29 and six under 28-minutes.

Crippa earned a bronze medal during the 2018 Berlin World Championships in the 10,000m event. He finished eighth during the Tokyo Olympic Games.

Ten of the 12 finishers in the men’s race ran sub-4:00. The winner was Matt Stonier of Great Britain who stopped the clock at 3:54.89. Piers Copeland and Andrew Coscoran finished 2-3.

Four of the seven women who finished the mile clocked under 4:30 with Georgia Smith going 4:27.81. Sarah Healy and Federica Del Buono went 2-3.