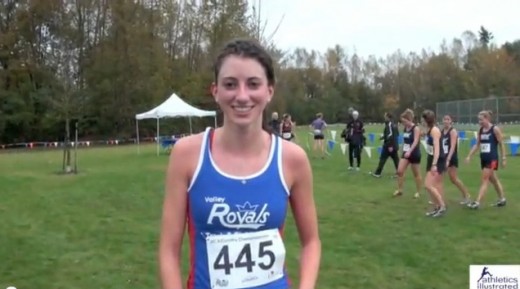 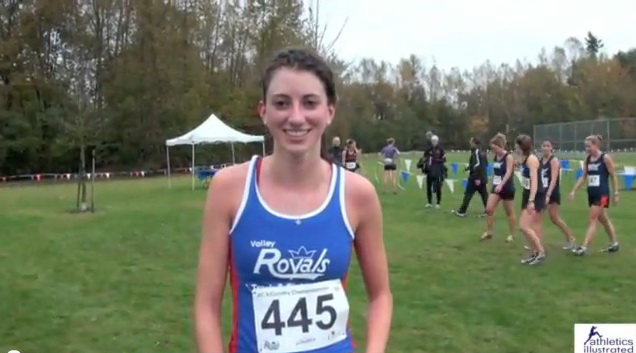 Jessica Smith ran a personal best in the 800 metres of 1:59.86 last summer at the Harry Jerome International Track Classic, qualifying for her first Olympic Games. In London, she placed second in her heat, and then seventh in the third semi-final (2:01.90). The 23-year-old is now finishing the last semester of her degree at Simon Fraser University with a criminology major and an education minor. At the BC Cross Country Championships on Oct. 27 she placed eighth. She has competed in cross country regularly, and at last year’s national meet she placed 10th.

Marcie Good: Can you start by telling me about your races at the Olympics?

Jessica Smith: I wasn’t too nervous the day before, but the morning of the race I was pretty nervous. Actually I don’t think Melissa (Bishop) and I talked at all that morning! We were both feeling the nerves but we didn’t want to say it. When I got to the call centre I was feeling pretty relaxed. I just knew that I had to go out and run my own race and run like I had been all season. Obviously I knew the other girls were all going to be right in the mix so I just had to run the best that I could to make the semi. It was the perfect situation and I was able to finish in the top three.

Going into the semis I had already had the experience of being on the track and listening to the crowd and being in that atmosphere. I was more relaxed going into the semi for sure. It was more exciting because I knew what to expect and I went into it knowing I had exceeded my goals already. Not only making the Olympics but making it to the semi-final was huge for me.

MG: So you took a few weeks off after the Olympics. What was it like coming down from that experience?

JS: I guess it’s a high for a bit, when you’ve got so much adrenaline and you keep asking yourself, ‘did I just really do that?’ Your emotions are kind of mixed. I kind of let go of all those emotions afterwards, and it was weird knowing it was over. There was so much built up for the whole entire season and then having competed at the Olympics and taking it all in, you let it all go and you realize that this is the start of a career that’s filled with those kinds of experiences and opportunities.

MG: I interviewed you after your race at the Jerome and it really struck me how you seem to have a very clear vision about your racing. Is your mental preparation something you work on?

JS: Not really. I think it just started with my coaches. When I joined the Norwesters and ran with Frank Reynolds, and then obviously when I went to SFU and ran with Brit (Townsend), she helped me a lot, dealing with the pressure and expectations. She knows exactly what you’re going through so she knows when to push you and when to take a rest. I guess the most important thing is to listen to your body and usually you can tell within yourself what you need to do. So I think a lot of it comes from being well prepared.

MG: What role does cross country play for you in your season?

JS: Cross country is a chance to change the environment and get in some mileage and take your mind off times or placings and just go out and challenge yourself to do your best at an event that you may not be the best at. It’s a nice change and definitely useful towards the track season.

MG: Do you enjoy it?

JS: I think so. I can’t say that I hate it. A lot of 800-metre runners don’t do it because of the distance. But I don’t think I would perform the same in the track season without it. So I guess it’s a tough love.

MG: How does it help you?

JS: It’s good strength training to a degree, but also mentally. Especially the distance. The 800 is only two laps but mentally, going into that last lap takes quite a bit out of you. So running a longer distance is a little bit intimidating, but I think that it helps you realize how strong you can be. The last kilometer in the 7k is hard for me, because 6k is pushing it already. But I love it.

MG: How do you feel about this weekend?

JS: Well, I raced in Guelph when I was a junior, I ran on the snow and ice, and I know what minus seven is like. Comparing that to Jericho, it’s a little bit nicer to run in the warmer climate. At the same time it’s going to be a little bit messy out there in the wind and the rain. But I think that’s what cross country is meant to be, unpredictable and challenging. I think it’s going to be a really close race because there’s a lot of girls that have awesome potential and of course I’m hoping to be up there and perform just as well as I did last year. It’s a good spectator course so that’s helpful, knowing you’re going to hear from someone on every loop.

MG: You made a huge leap last year, and now you’re an Olympic semi-finalist. Do you feel different, training and racing now?

JS: I don’t really feel any different, because I think that what happens in the track season, you learn from it, and then you kind of use it and move on. Every season is different, you’re not always going to PB and you’re not always going to have the best races. After the Olympics, my training didn’t really change, my life didn’t really change in a huge way. I’m still going to school, still training, still working, balancing my life that way.

MG: What kind of work do you do?

JS: I tutor in elementary schools, and I work with the event staff up at SFU and I coach track and field and cross country at the schools as well so I’ve got lots going on.

MG: Is that what you’re interested in as a career, teaching and education?

JS: I flip flop. I’m just trying to fit in some job experience, working with kids. I think that it’s important for them to have a role model, and learn through people who’ve had success and for me hopefully to leave an impression on them. I would love for our future generations to have the experiences I’ve had, so hopefully I can help keep kids in sport and realize what potential they have.

MG: You’re a solid cross country runner and you’ve run a lot of 1500s. This may be a long way in your future, but do you think about eventually moving to the 1500?

JS: Not really. I mean I know a lot of runners move up as they age, but right now I think I can improve at the 800 and I just want to keep doing it.