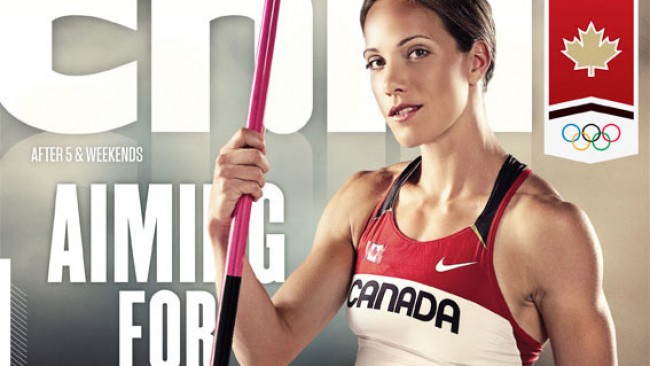 OTTAWA – Athletics Canada announced today its 2012 annual award winners with Jessica Zelinka of London, Ont., getting the nod in three categories. Zelinka was chosen as outstanding athlete of the year, as most outstanding athlete in track events and as the combined

events athlete of the year. The winners are chosen by Athletics Canada’s Awards Committee from the nominee pool put forward by the athletics community.  The award recipients will be honoured at the 2013 Canadian Championships in Moncton, N.B., which take place June 20-23.

Jessica Zelinka caps off her exceptional season by winning three Athletics Canada awards including the top honours of the Jack W. Davies Trophy (outstanding athlete of the year). Jessica earned her ticket to the Olympic Games with a record breaking performance at the Canadian championships in the heptathlon, earning 6599 points over the gruelling two day competition. The multi-talented athlete also broke out in the 100-metre hurdles winning gold at the Canadian championships with a personal best time of 12.68 seconds. Zelinka went on to finish seventh overall at the Olympic Games in both the heptathlon and 100-metre hurdles. Jessica is also the recipient of the Combined Events Athlete of the Year.

The Phil A. Edwards Memorial Trophy for the outstanding athlete of the year in track events voting ended in a tie with the honour going to both Jessica Zelinka and Phylicia George of Markham, Ont. Phylicia finished sixth at the Olympic Games in a tough woman’s 100-metre hurdles with a personal best time of 12.65 seconds. Not only did she take silver at the Canadian Championship in the 100-metre hurdles to qualify for the games but she also took gold in the 100-metres to also qualify in two separate events, electing to concentrate on the hurdles.

Olympic bronze medalist  of Corunna, Ont., is the winner of both the Cal D. Bricker Memorial Trophy for outstanding performance of the year and the F.N.A. Rowell Trophy for outstanding athlete of the year in field events. The high jumper won bronze at the Olympic Games this summer in a three way tie which was Canada’s only track and field medal at the games. His performance at the games also marks Canada’s first high jump medal since 1976.

Vancouver, B.C’s Inaki Gomez is the winner of the Fred Begley Memorial Trophy for outstanding athlete of the year in off-track events. Gomez finished 13th in the men’s 20-kilometre race walk in a Canadian record time of 1:20:58 at the Olympic Games.

Sarah Wells of Unionville, Ont., is the 2012 recipient of the Fred Tees Memorial Trophy as the outstanding athlete of the year enrolled in a Canadian University. Sarah captured her second straight national title in the 400-metre hurdles at the Canadian Trials and ultimately secured a spot on the Olympic Games team; where she was a semi-finalist. Wells, who attends the University of Toronto, set a new Canadian Interuniversity Sport (CIS) record with her teammates in the women’s 4×400-metre relay earlier this season.

The Eric E. Coy Trophy for the outstanding junior athlete of the year goes to Toronto, ON’s Shawnacy Barber. Barber won Canada’s only medal at the 2012 IAAF World Junior Championships. He won bronze with a Canadian junior record of 5.55-metres in the men’s pole vault. Barber capped of his season by surpassing his record once again with a jump of 5.57-metres at the Amateur Athletic Union National Championship.

Nicole Setterington of London, Ont., is the recipient of the Myrtle Cook Trophy for the outstanding youth athlete of the year. Nicole won gold with a new Canadian youth record in the 100-metre hurdles at the Canadian Legion Championship. Her time of 13.38 seconds ranks her second in the world in the youth category; she was also given the opportunity to represent Canada at the IAAF World Junior Championship.

The Outstanding Para-Athlete of the Year in Ambulatory Events is Ottawa, Ont.’s Jason Dunkerley and guide runner Joshua Karanja for the second straight year.  Jason brought home an impressive two medals and two Canadian records from the 2012 Paralympic Games. He won silver in the T11 classification 5000-metres and bronze in the 1500-metres.

Michelle Stilwell of Nanoose Bay, B.C., is the Outstanding Para-Athlete of the Year in Wheelchair Events for the third year in a row. Michelle rewrote history books by breaking three separate world records in the T52 classification 100-metres, 200-metres and 400-metres on two different occasions throughout the season.  She capped her season off by winning two medals at the Paralympic Games; gold in the 200-metres in a meet record time of 33.80-seconds and silver in the 100-metres.

Anthony McCleary of Pickering, Ont., is the recipient of Athletics Canada’s Coach of the Year Award. McCleary’s athletes all enjoyed outstanding seasons; notably the three under his tutelage who competed at the 2012 Olympic Games.

Olympic Games semi finalist
Bronze at the Canadian championship and personal best
Ranked 33rd in the world in 100-metre hurdles; 4th in Canada