Thirty-one-year old Canadian Olympian Jessica Zelinka, is currently ranked seventh in the world in both the 100m hurdles as well as the heptathlon. 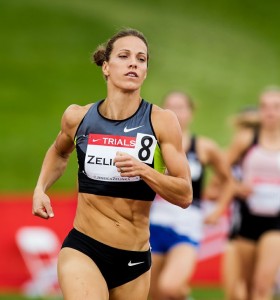 She holds the two highest point performance records in Canadian history with a 6599 point personal best. She has won gold at the 2007 Pan American Games, silver at the 2007 World Combined Events Challenge and placed fifth and seventh at the Beijing and London Olympics, respectively. She also finished seventh in the 100mh at the 2012 London Olympic Games. She is preparing to compete, at least for one year, specifically in the hurdles as she will take some time off from training as a heptathlete. It will be interesting to see what can be done, with a singular focus.

Zelinka, from London, Ontario is now living in Stamford, Connecticut with her daughter Anika and husband Nathaniel Miller who is a Water Polo coach and former member of Team Canada.

Christopher Kelsall: Having won three 2012 Athletics Canada awards including Outstanding Athlete of the Year, where does this rank in your long list of accomplishments?

Jessica Zelinka: The awards I received from Athletics Canada were, I believe, a reflection of not only the hard work I put in over the years to prepare for the 2012 season, but also of the combined efforts and dedication of my support team. So many people played a big role in helping me achieve the performances I enjoyed this summer, especially my coach, Les Gramantik, and my very supportive family. I’m thankful for the funding I was receiving, and for the support of my sponsors that enabled me to access resources and opportunities to better prepare for the Olympic Games, I couldn’t have performed as well as I did without their support. With so many excellent performances this year by Canadian track athletes, it is very humbling to have won these awards.

CK: In regards to the missed drug test of yours, can you talk about that? Was it ill-timed on their part?

JZ: If the system wasn’t so time-consuming and error-prone, there would have been no problem. Getting a strike for a missed test, while attending a public event in support of the Canadian Olympic Committee (COC), pretty much speaks directly to how messed up the program is.

CK: There must be an appeal for that. How can they expect you to pee in two places at once?

JZ: They do have an appeal process, but as I found out they don’t actually consider the arguments put forward.  I missed a test, my whereabouts weren’t up to date, it’s their zero tolerance policy.  Doesn’t matter how or why, or where I was. Now I know, and will just make sure to devote whatever time is necessary to have those whereabouts always fully up-to-date, even if it means turning down events like the one I attended in Toronto.

CK: There were rumours of your imminent retirement. I understand that you have decided to go for the 2016 Rio Olympics, is this so?

JZ: Immediately after my heptathlon at the Olympic Games, I told reporters that I would not be continuing on for another four years, that I just couldn’t see it being feasible for me and my family. After putting so much focus on a major goal for four years (and knowing that it took so much support to get me there), I wasn’t about to sign me (and my family) up for another four years without looking at the situation realistically. Since that day in London, I’ve realize that I’m not ready to let go of another opportunity to compete for Canada at a Olympic Games, but more importantly, my family is behind me all the way. Having the option to focus on the hurdles for a year or so, while taking some time away from the gruelling training demands of the heptathlon, made another four years seem more manageable and very exciting.

CK: And this way Anika can remember your competition days.

JZ: The truth is that the older she gets, the harder it is on her (and me!) when I have to leave for training camps and competitions. The additional funding I was receiving leading into London helped a great deal, but as of today I’ve been told I am no longer eligible for that support.  We’ll find a way to make it work, I’m hoping.

CK: Is there an opportunity to appeal or go to arbitration?

JZ: Not that I know of. From my understanding, under OTP pressure, the only real focus of funding is on the Olympic Games. By their standards, they’ve decided that I don’t fit the profile of a high-priority athlete for 2016 targeted funding…I guess they think I’ll be “too old” at 34 in 2016. It’s sad, because aside from the fact that one of the best hurdlers in the world in 2012 was 37, I think that veteran athletes also add value to the National programs beyond just performances.  A medal, or even just strong performances, at Worlds or Commonwealth or Pan-Ams can have very positive effects on the team as a whole, not to mention raise the bar that the younger athletes are aiming for.

CK: Odd. In looking at Athletics Canada’s requirements (not OTP’s), the standard is to be top-12. You are currently ranked number seven in the World and finished in seventh place in the Olympics in the heptathlon. And in the 100mh you finished seventh as well. Dianne Cummins went through the same thing (with AC) and medalled (silver) in the 2010 Commonwealth Games in New Delhi, at the age of 36. Interesting that you recommitted. Does the idea of their not funding you drive you to prove them wrong?

JZ: I run track because I love it. I love chasing new personal bests, and I believe that I have more of those in my future. I hope it translates to a podium finish in Rio, but what this summer taught me is that I can’t control what will happen every time I compete.  What I can control is how diligently I work at perfecting my craft, how hard I push myself, and how much I’m willing to sacrifice to see just how good I can be.  I am extremely lucky because my family is 100% behind me, which makes it easier to make those sacrifices.  To answer your question, I don’t need any extra motivation.  They make their decisions, I can’t control that, and while I wish they continued to believe in me, I believe in myself and that is what matters in the end.

CK: For 2013, are you planning to compete at the IAAF World Track and Field Championships?

JZ: It can be hard for some athletes to keep pushing, especially after the end of a four year Olympic cycle. I’ve decided to take a mental break from competing in the heptathlon in 2013, and instead to revive my spirits with the new exciting challenges that the 100m hurdles provide. My goal is to reach the 100m hurdles final at the World Championships, as I did in London, and improve on my performance.

CK: Are you now self-coached? If so, are you going to seek a coach in the new year?

JZ: Currently I’m on my own. I approached Athletics Canada shortly after I knew I’d be moving to Connecticut, asking for their guidance in setting up my new training environment. Instead, I received many unclear answers about my funding support and about their commitment to me as a possible 2016 Olympic Games hopeful. This financial uncertainty makes planning more challenging, but for the time being I’m enjoying training on my own.  I intend to be working with a coach eventually (and especially when I pick up the heptathlon again), but for now it’s refreshing to be able to set my own schedule and focus on recovering physically and mentally from the grind of the last Olympic cycle. My hope is that I’ll have funding to work with the Athletics Canada’s event coaches in training camp settings throughout the year.

CK: No chance of having Gramantik coach you while not being present?

JZ: He has generously offered to consult or advise me on my program, but he made it clear that he is not comfortable coaching me from afar.  I’ll continue to work with him, and Gary Winkler, directly at the Athletics Canada training camps that I am able to fit into my budget.

CK: So have you officially moved from Calgary, Alberta to Stamford via your home town of London, Ontario? Is Stamford home?

JZ: Yes, Stamford, Connecticut is now “home” to us. Our cat is still in Calgary, and I’ve been through London often in the past few months, but we are settling in nicely to our new surroundings in Stamford. It’s been quite the adjustment moving to a new city and country, but our family has never been the type to shy away from new opportunities even if it means change.

CK: Are there good training facilities near your new home in Stamford?

JZ: There is a great outdoor track a short jog away from my house. Because of the milder weather out here, I was able to train outdoors the entire fall which has been such a nice change from being indoors from late September and beyond in Calgary.  As the weather cools, I’ll be training at one of the best indoor facilities in North America (The Armory, NY), so overall I am very pleased with my access to quality facilities down here.