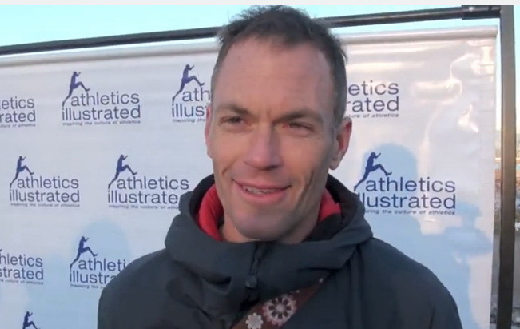 Jim Finlayson of Victoria, BC quietly broke his own former world record in the beer mile of 5:09 with a 5:07.3 running,  Saturday, September 5th at the Oak Bay High School track.  This performance is the “super” masters (40-plus) beer mile world record, a personal best and the 12th fastest all-time. He used a Sleeman Maple Cream Ale.

“The race wasn’t as smooth as I’d hoped. Legs felt good during the warm-up and strides, but after one lap I found it hard to find my running rhythm. Was tough against the wind on the homestretch. I felt like I had to lean into it each lap, which isn’t how you want to come in to the beer exchange, shared Finlayson.

Asked how the drinking went he replied, “The drinking was smooth, quicker than in San Francisco. I knew I was running somewhere around 5:10 pace, but was trying to avoid doing the calculations in my head.

The second fastest super master’s age world time was accomplished by American Lon Brittenbach in the time of 5:42.4, however, Finalyson has run a 5:21.4 as a super-master, so he now owns the first and second fastest master’s age category world best times. He previously held the two fastest times as an open runner.

The current world record is held by Scotsman Lewis Kent, who is from Glasgow, and currently living in Ontario. He accomplished the record using a beer called Amsterdam Blonde.

American James Neilson was the first person to break the five-minute barrier with his 2014 performance using Budwieser. Although Kingston Beer Mile does recognise the record, there is a dispute whether Anheuser Busch’s flagship beverage is actually a beer. See story here.

The video was shot on a camera phone.