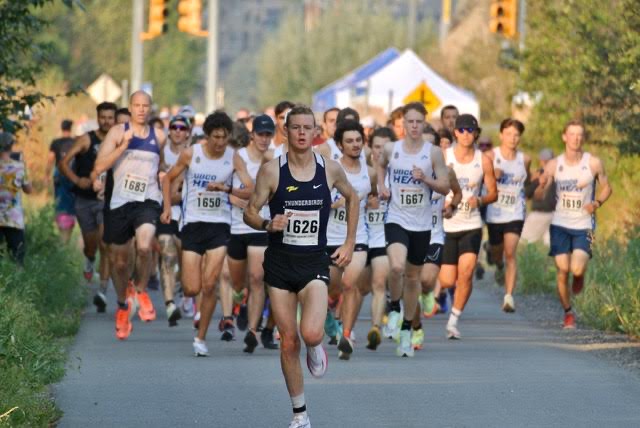 John Gay and Courtney Brohart won the Fast Days of Summer 5000 in Kelowna, BC on Sunday.

Gay, a Tokyo Olympian specialising in the 3000-metre steeplechase event, set a new course record with his 14:11 performance. He had a big margin at the line and was uncontested throughout, however, Russell Pearson of Calgary took second in the time of 15:56 — a strong performance for the 19-year-old. Isaac Baker of Surrey took third in 16:09.

Gay went out at approximately 2:48 pace, apparently taking advantage of what would be cool temperatures for the desert city at 17 degrees. He settled into 2:55 and cruised home for the win in commanding fashion. His peak pace may have been in the low 2:30s.

“I got too complacent in the middle kms and had to boogie on the return,” shared Gay.

Gay also competed in the 2022 Birmingham Commonwealth Games finishing fourth in the steeple with a finish time of 8:30.26. The 25-year-old’s personal best of 8:16.99 was run during the Tokyo Olympic Games last year. His 5000m best is 13:29.82 which he ran in the Commonwealth Games in August, as he doubled down.

Next up for Gay is the Canadian 5K Championships on Sept. 11 in Moncton, New Brunswick.

“It was fun to race at home after a lot of years away,” shared Gay. “The Fast Days of Summer course is a fantastic out and back that makes quick times possible.”

“I’m racing the national 5k championships next weekend in Moncton and used this past Sunday as an opportunity for a final specific workout session. The goal was to run 10k race pace and try to take advantage of the slight downhill return to negative split. I ran 7:15/6:56 for my halfway splits, so definitely think it was mission accomplished.”

Pearson, at just 17, ran a solid time. While attending high school in Calgary, he ran the Calgary Marathon and finished in the time of 3:06:11. He is now starting his first cross-country season with the University of British Columbia Okanagan Heat under coach Malindi Elmore. The Fast Days of Summer 5000 was a good pre-season road race for Pearson and the many on the Heat roster that took in the fixture.

The 32-year-old Brohart ran to a 17:09 finish time. She placed 20th overall. She owns a best of 17:03 from the 2021 Bazan Bay 5K. Brohart studied at Western University and is originally from Sarnia, Ontario, but now lives in Calgary, Alberta and trains under Travis Cummings with the Cochrane Endurance Project.

“We felt the race went according to plan,” share Brohart. “It was great opportunity to race some speedy athletes. We just finished four weeks of hard workouts with big mileage, so I didn’t feel super fast but felt really strong. I think it was a good set up for the start of the cross-country season. The focus now will be to get some fast cross races in leading up to cross-country nationals.”

Joanna Brown of Central Kootenay clocked a 17:37 time for second place. In third place was Emily Simpson, who virtually tied with fellow 20-24 age-group competitor Eliyah Brawdy in 17:43. Both are from Kelowna.

Race director Dustin Quigley said, “I have never seen so many people spent at the finish line before. Having the UBCO Heat in the race must have inspired everyone.”

Sixty-one-year-old David Guss of Kelowna set a new Canadian age-group record with his 17:08 finish time. Guss currently holds a number of provincial and national 60-plus age-group records from the 800m up to the 5K distance.

There were four (pending) master’s records in the mile.

Sydney Olympic triathlete Carol Montgomery set a 55-59 Canadian record of 5:51. The performance comes one week after breaking the provincial 1500m record with a 5:18 performance in South Surrey.