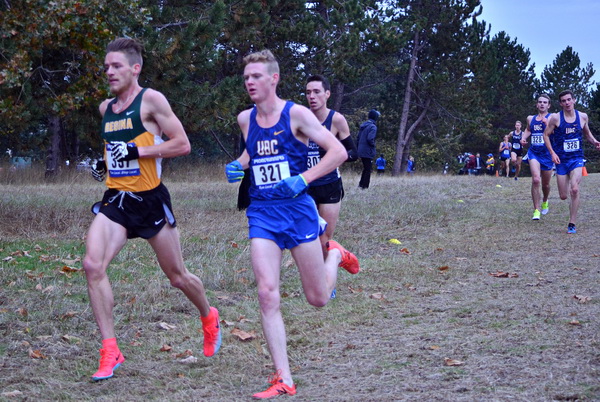 He was the only finisher under the nine-minute benchmark in the steeple, recording an 8:59.03.

Gay also broke the 14-minute barrier for the first time in the 5,000-metres. He won in the time of 13:57.68. The second place finisher was teammate Kieran Lumb, who crossed the finish line in the time of 14:02.82, while Tyler Dozzi finished third, stopping the clock at 14:13.34; it was a Thunderbird sweep.

“To break 14 in the 5,000m was another exciting milestone to cross. As you know, being a steeplechaser means there are few truly high quality meets where I can afford to turn my attention to a secondary event like the 5k.  That said, it’s always been my goal to remain competitive across the spectrum of distance events and never to pigeonhole myself as solely a steeplechaser. I think the 5,000 in late April was great confirmation of that and, while I likely won’t run another 5,000m this season, I believe it was valuable both physically and psychologically for my ambitions in my main event,” shared the Kelowna, BC native.

In the 3,000-msc, he finished well ahead of Cornerstone’s Joey DeBoer, who crossed the line in the time of 9:05.07. The third place finisher was Kevin Poteracke of Southern Oregon, coming in at 9:06.91.

This makes Gay a three-time national champion in the event. He owns an impressive personal best time of 8:36.55.

In November, at the Fort Vancouver National Historic Site in Washington, Gay also helped his Thunderbirds to a first ever NAIA national cross-country gold, by finishing fourth individually.  All five Thunderbird runners scored and finished in the top 15.

“I’m really pleased to have finished my NAIA career in such memorable fashion. While the steeple has always been the focus going into that championship, the opportunity to race the 5,000m later as part of a UBC contingent that ranked 1-3 in the regular season was truly exciting and really gave my performance at nationals the feeling of being part of a collective team effort. I couldn’t be happier with how the meet went for our men’s program and to watch the rest of my team succeed as they did was fantastic confirmation of the development taking place here at UBC. Looking back on my time as a Thunderbird, I am so proud of what our team has accomplished and grateful for the support and belief instilled in me and my teammates by our coaches,” added Gay.