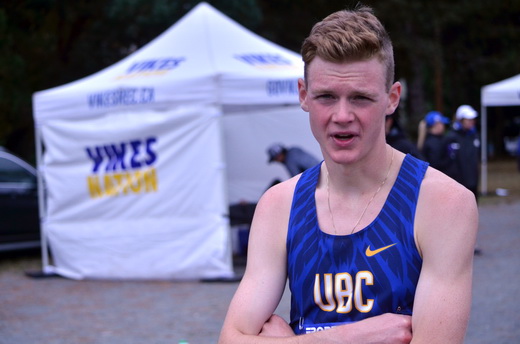 University of British Columbia Thunderbird John Gay got off to a hot start for the 2018 season with his first sub-8-minute, 3,000m indoor race. He competed in the University of Washington Open on January 26th and 27th in the fourth section, which was the fastest of the four races. He finished ninth of 18 competitors recording the time of 7:59.80.

“Despite not really competing in a full indoor season with UBC, going sub-8 in the 3,000m was probably the biggest goal I set for myself at the outset of my collegiate career,” shared Gay. “I think it probably stems from an attachment to that event as the marquee distance race for high schoolers; coupled with watching Luc Bruchet break it quite famously in 2014. He was still competing for them at the time. It was one of the front-runners in my decision about where to attend upon high school graduation.”

“I always told myself that I wanted to break 8 in a UBC uniform and to finally do it feels like an amazing capstone to the incredible experience I’ve had representing my university program.”

Gay grew up in Kelowna, BC and attended Okanagan Mission Secondary. He didn’t get a lot of looks from universities south of the border, however, the Thunderbirds knew that they had a good one in Gay – he is an NAIA 3,000m steeplechase champion, strong cross-country runner and has hit his stride during his fourth year. Part of that is staying healthy and fitting in consistent training.

“This winter I’ve been able to stay healthy and string together a number of solid, high mileage weeks. Going into the race my coaches and I had discussed the potential of getting after a good time, but I’ll be racing again at the Dempsey on February 10th and that meet was intended to be the real focus for finally dipping under the mark. I was fortunate to get seeded in the top heat and the provision of a pacemaker ensured that the race was fast and strung out quickly, something important on an indoor track especially. I was able to work my way up through the first half of the race and found myself pushing near to the front with about 600m to go. From there I faded back a little bit and when I do it over again at Dempsey, I think I’ll try to push a bit after the mile mark to buy myself some breathing room given my lacklustre finishing speed.”

Athletics Canada invited him down to their warm-weather camp, which will likely be an important training stint.

“I was fortunate enough to be invited down to the Athletics Canada warm-weather camp in San Diego between my two UW outings and I’m hoping the heat down here will illicit another good performance in Seattle!”