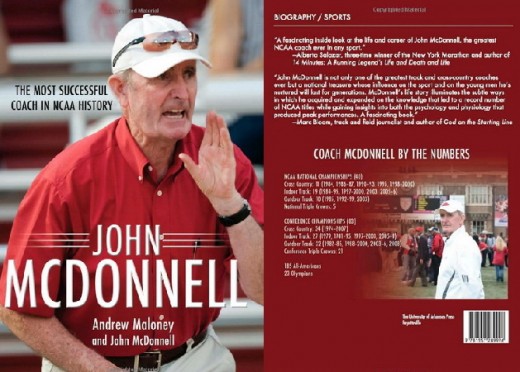 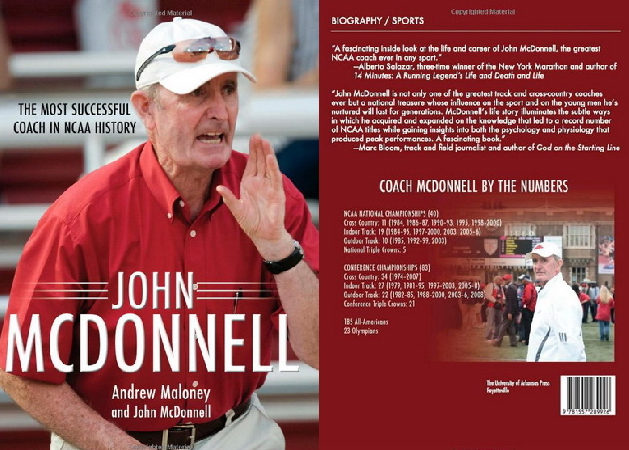 Title: John McDonnell: The Most Successful Coach in NCAA History

John McDonnell: The Greatest Coach in NCAA History, is a detailed and entertaining biographical account of the life of a man with an insatiable and unrelenting appetite for winning. He won as an athlete – including beating the legendary American miler (and 1500 metre runner) Jim Ryun – and he won as a coach, perpetually.

At the age of 68, just to take the boots to one of his main rivals one final time, he willed his lower-ranked Razorbacks to defeat the University of Michigan Wolverines, to win the 2005 indoor national championship. It was one of his greatest triumphs of his career and he had many. In total they won, 82 Conference Championships, and 21 Conference Triple Crowns. McDonnell also coached 23 Olympians as well as 185 All-Americans. He retired in 2008.

McDonnell grew up on a farm in Ireland, where a great work ethic was instilled. In 1969, McDonnell took that great work ethic to America to earn a bachelor’s degree from the University of Louisiana at Lafayette. At the time it was named the University of Southwestern Louisiana. He competed primarily in the mile and 3000-metre distances and became a six-time all-American in track and cross-country while at USL. He later coached at New Providence (N.J.) High School during the 1969 and 1970 seasons, then coached at Lafayette (La.) High School during 1971 before joining the coaching staff at the University of Arkansas.

At the start of the 1972 season, McDonnell began coaching with the Razorbacks. In 1978 he permanently grabbed the reigns of the historically mediocre athletics program and did not let go until the day he looked in the mirror, at the age of 66, and realized that he was suddenly old. Was there regret? He wondered where the time went. Did his life pass him by?

In 1940 Thomas Wolfe wrote the iconic novel, You Can’t Go Home Again, which is a story about the unfair passage of time and that one can never really go home again; time keeps on slipping into the future, indeed. McDonnell tried to go home alright – back to County Mayo, Ireland – and there, he was hit again with the harsh reality of age; everyone else was old too. He wondered if it was time to retire, while at the same time his drive continued, undisturbed. He continued on steering the Razorbacks program through murky water, so to leave the Razorbacks in good order for the incumbent in-wait, Chris Buckman, who is the current head coach.

McDonnell commanded fierce loyalty from his athletes. He was a no-nonsense coach who demanded that each individual run for the team and not for themselves, especially during cross-country season. McDonnell did not suffer fools lightly and did not hesitate to send athletes packing if they chose not to perform within the team concept. He also demanded that his athletes study hard and to keep their grades up; as education was to be the primary reason they were at the school, not athletics. Some students would indeed leave, but most demonstrated fierce loyalty. Several, including the legendary Alistair Cragg, a native of Johannesburg, South Africa continued to have McDonnell coach him well after the varsity career was over; such was his respect for McDonnell, Cragg shed tears at their final parting.

The story does not suggest that there was one individual antagonist, but several that were ongoing, perhaps a jealous coach or an underperforming athlete; when you are on top, you have a target painted on your back. McDonnell’s inexorable success could only point to one moral: Intense focus, clear expectations and unwavering dedication to the end, creates champions and more importantly, championships.  Although the book is big and contains well over 400 pages, you may finish it sooner than you expect to; especially if you are an athletics fan.