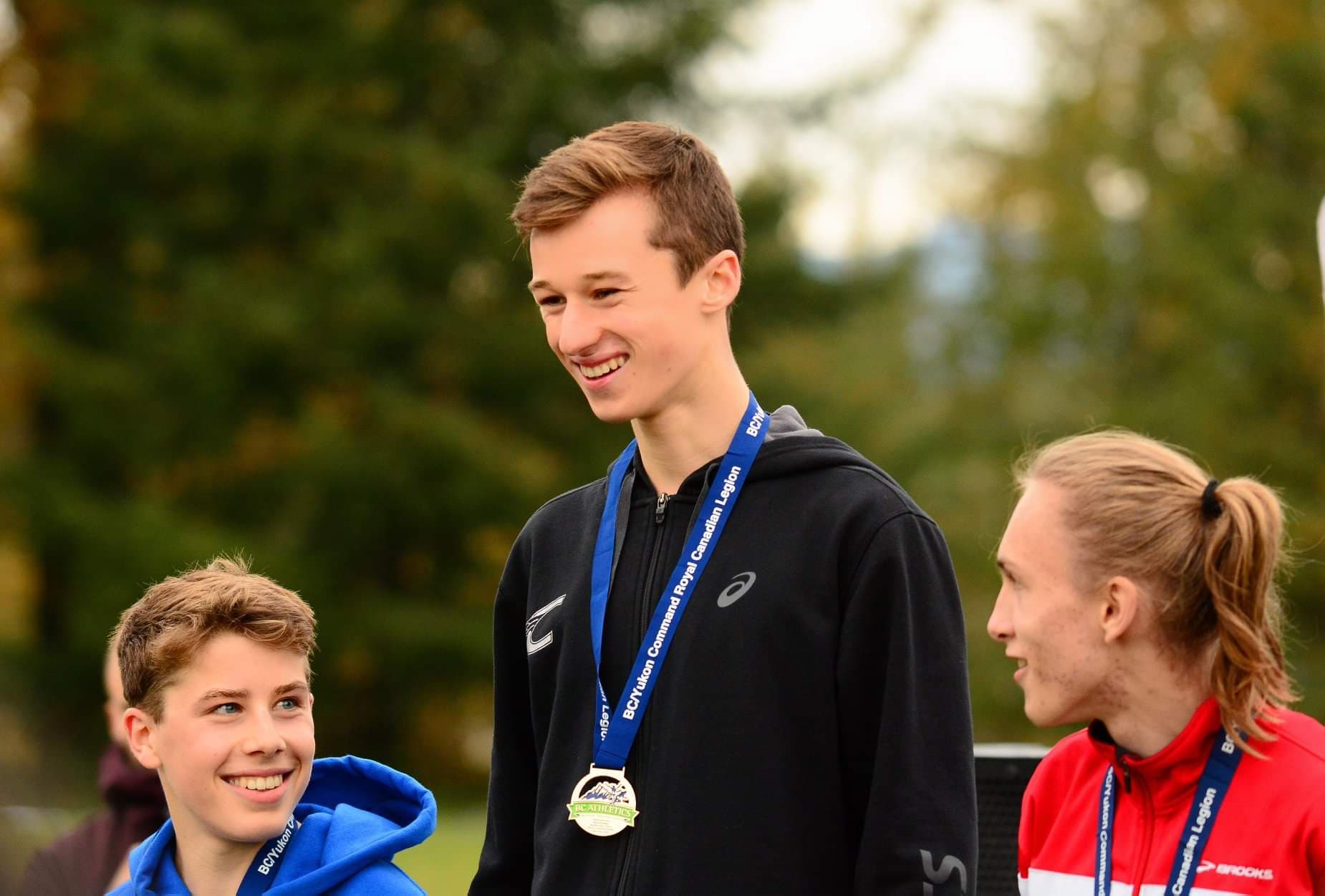 From last to first in four seasons makes for a Cinderella story of sorts for Vancouver student-athlete Josh Woolgar. Well, it was not quite a last-to-first continuum, but in Grade 9 he finished 194th out of 210 competitors during the 2015 British Columbia Cross Country High School Championships – close enough.

During 2017, he was training with knee braces on as he had weak knees, but for Coach Scott Kent of Coastal Track Club, he could see talent waiting to be developed.

“He found me a few weeks after BC Clubs last year,” said Kent. “His knees were weak and he had to wear knee braces. I called him Forrest. I could tell he had talent but it was a few months before he finally broke free from the braces but the nickname stuck.”

Leading up to the 2018 edition on Nov. 3, it was looking like he could win the provincials that were to take place at Nanaimo’s Beban Park.

He won his zone championships the previous week, and then followed up that win with a provincial clubs championships victory in Abbotsford on Oct. 27.

Asked when he saw Woolgar demonstrate his talent, Scott said, “The annual Spring Break training camp in Vegas was where I knew he was going to be dangerous. Once his knees were strong enough to handle my program it was just a matter of having enough time to build him into who he is now. Every week he has gotten stronger. His form is almost perfect now and I never stray too far from their speed, so his kick is top notch.”

At the 2018 BC High Schools, he hit the final straightaway, passed Mount Douglas High School athlete Liam Dwyer and started his celly early, pulling on his Pacific Christian Secondary singlet before crossing the finish line.

It was a long run, sort of speak; his trajectory from back-of-the-pack to leader.

“I knew in July he was going to be on the podium. I coach a number of talented athletes and so do a number of coaches throughout BC, so I didn’t know what colour it was going to be, back then, but I am very proud of him,” added Kent.

“The race started out with a quick first lap but after that, the leaders (Brendan McLaughlin and Keegan Ingraham) started to slow the pace down, which made the first lap more of a tempo effort,” shared Woolgar. “I led most of the second lap and started to quicken the pace, which caused the field to spread out a lot more.”

During the third and final lap, there was a pack of about four athletes in the mix and challenging for the win. “Dwyer put in a fast surge, which I couldn’t match as I was stuck behind an athlete – that surge was really unexpected.”

Woolgar made his way through the pack to get onto Dwyer’s tail during that final lap.

“Dwyer and I separated from the field over the final 500-metres as I was chasing him down, and when I saw my coach yelling for me to “go now”, I emptied the tank and managed to pass him with 150m to go. I then put a few seconds on him with my kick.”

It worked, and he won his third consecutive championships cross-country event in less than three weeks.

With Dwyer finishing second, he led his Mt. Doug team to a third-place finish.

“I was expecting a very competitive race,” added Woolgar. “I knew that I could win it from the start, but that I would definitely have to dig really deep and hurt a lot to get that done.”

“Also, I was confident, but nervous for the race as it was my last BC high school cross country competition ever. I knew that if I was within 5m of the first positioned athlete, with 150-meters left, I would be able to out-kick them, so I had a mindset of just trying to stick with everyone until then.”

Woolgar’s Richmond Christian School fielded just two athletes, so did not have enough manpower to factor in the team scoring.

He finished in the time of 20:37, just five seconds in front of Dwyer. Alexander Farlinger of West Van High School finished third another four seconds back.

While the provincial championships were his final cross-country meet, being in Grade 12, he will be wanting to display the best of his talent in the spring during outdoor track.

Asked if has had universities talk to him yet he said, “A few schools have talked to me but I wanted to see how well I did at BC’s before looking at all the options.”

Perhaps track season will be even more indicative of his talent and therefore provide him with a broader range of schools to choose from.

“I would be happy staying local or going abroad to run and study. I haven’t completely nailed down what I’m going to study yet, but right now I’m thinking the health sciences field, possibly nursing.”

“I would really like to improve my times by a large margin this year as it is my final high school track season. My goals are to go under 4:00 in the 1500m, and to go under 8:30 in the 3000m. I’ve never run steeplechase before, so I’m not sure how I would do in the event, but I’m hoping to run under 5:55. An added lofty goal somewhere along the way – I think it would be awesome to break one of the BC high school records. I think my best shot to do this would be in the 2000m steeplechase.”

Woolgar played soccer since he was six years old. He tried out for the Delta Coastal selects metro team and made it on the squad. Like many runners on the west coast, he likely developed his big aerobic capacity as well as his kick from growing up playing the beautiful game.

“After a few years, I started losing interest and wasn’t going anywhere in the sport. So I took up running which I had always been good at but never really trained for. After a season with Kajaks Track and Field Club and then a transition to Coastal Track Club, I’ve really grown to love the sport and improve substantially.”