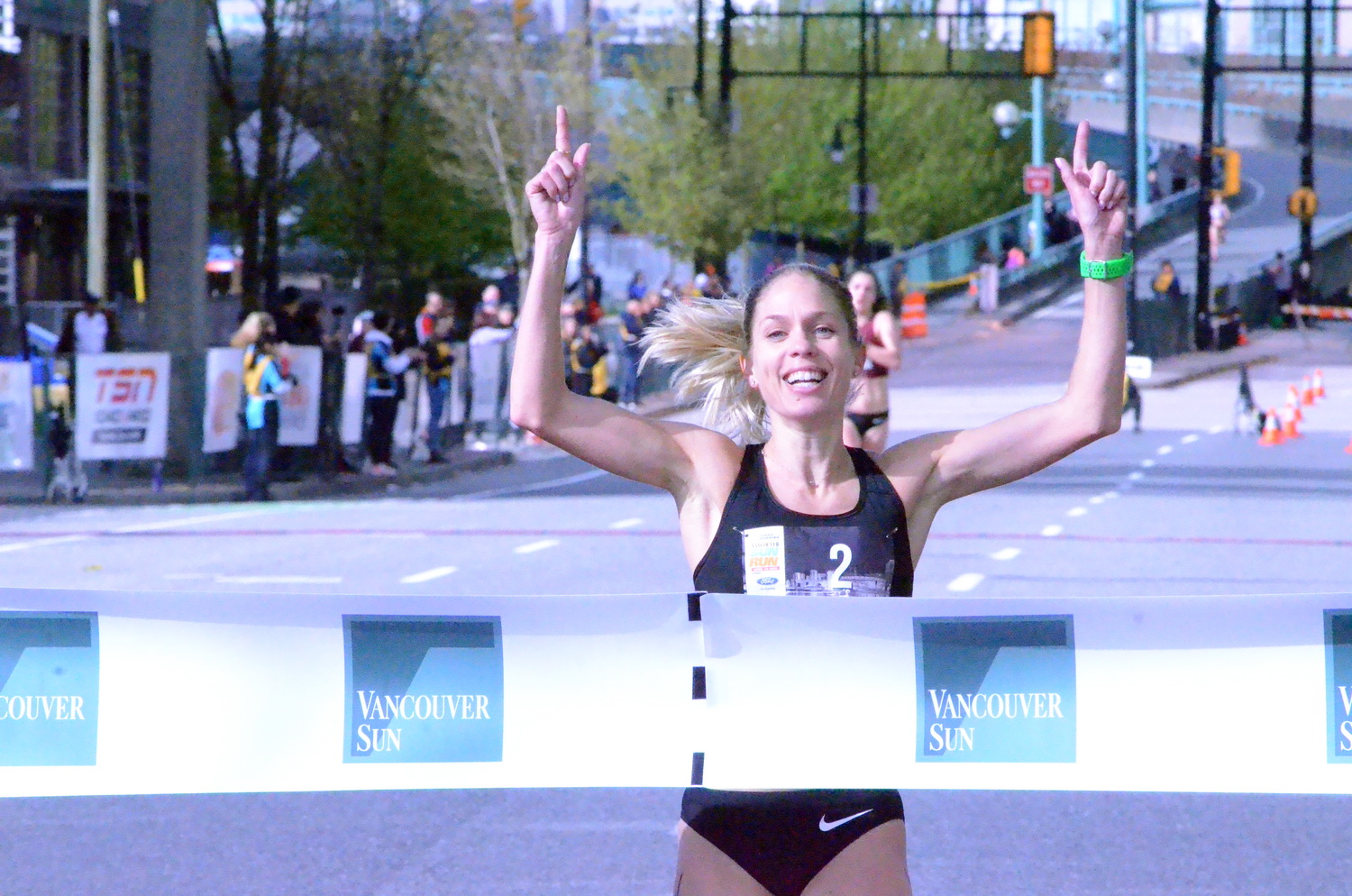 On the 35th anniversary of the Vancouver Sun Run, Canadians took back the men’s and women’s titles on Sunday on the streets of downtown Vancouver. In fact, it was two Vancouver-area runners who won, leading approximately 35,000 finishers (43,300 registrants) in the race that was started by the legendary Doug and Diane Clement, who also participated. The previous BC male to win did so in 1992, the year Kent was born. Three-time national record  holder Paul Williams won it that year in the time of 29:03 on a slightly different course.

Natasha Wodak won for her third time and first since 2013 in 32:38. Justin Kent won for the first time with his 29:30 performance.

“I am speechless,” said Kent of Surrey. “It’s a dream come true. We were five abreast at 8K and I looked around all five of us were all feeling pretty good. Hofbauer made a good move around 9k up the Cambie Bridge ramp and I just hung tough. I knew that if I was in reach over the final 400m I could take it. I took a swing and sometimes you win and sometimes you don’t, but I did it – the Sun Run is such an iconic event – until now I haven’t had a chance to experience it. To have my family and friends here it’s just great, I am blown away.”

Kent, who said before the race started that he feels very fit, led a line of six runners that were separated by just 17 seconds to the tape. Following Kent was Calgary’s national marathon champion Trevor Hofbauer. Hofbauer was credited with the same time; however, Kent edged him by a single step at the line.

Asked if how he was feeling going into the race he said, “You don’t fly from Calgary for a road race and not go for the win, so I went for it. It was a good race and although I wanted the win, I am happy with the result.”

Haron Sirma, a transplanted Kenyan living in Hamilton, ON finished third in 29:32.

“I have been training with him. I knew he was fit and I know what he can do. I am happy to finish as well as I did,” said Travaglini.

“At about 8K I made a surge and that sort of broke up the pack of seven of us. Then Justin pulled up beside me at about 9.5K and he got me on that off-ramp coming down to the finish line and he created just a little bit too much room for me to make up.,” said Hofbauer.

“Originally, I wanted to run 2:13 in Hamburg. Now I am thinking maybe 2:15 is a little more realistic, but today was a good confidence booster.”

Jerrell Mock of Fort Collins, CO was fifth. The 2018 graduate of Colorado State University came into the race with the fastest 10K personal best to his credit of 28:33.58 from February, 2019. Mock finished seven seconds and one position up on Vancouver’s Rob Watson.

“I see Watson ran the race. He holds school records from Colorado State University and I saw his performances on the walls of the school,” said Mock, who like Watson, competed in the 3,000m steeplechase, however Mock’s better events were in cross-country (8k, 10k) and over the 5,000m and 10,000m distances. He is a four-time All-American.

Watson just happens to have run two 2:13s during his career.

When greeting Watson after the race he told him, “You are good for 2:12.”

Wodak flew in Saturday from her training stint in Flagstaff, AZ. She will fly back Monday to continue training at altitude.

Her first Sun Run win came in 2012. Her coach Lynn Kanuka won the race three times in a row in 1987, 1988 and 1989. Wodak had not raced directly after training at altitude in the past so this Sun Run was a bit of an unknown – but it’s her hometown and her favourite road race.

“Call me crazy, but I love this race and I know it wasn’t ideal to come back from a short time at altitude, but I wanted to race it as well as just have a good race, as I didn’t have a good one at worlds.” Shared Wodak.

She competed in the 2019 IAAF World Cross Country Championships in Aarhus, Denmark last month and didn’t have the performance that she was looking for. She will now focus training for the Payton Jordan Invitational at the Stanford University track.

Second to Wodak was Kinsey Middleton who finished in 32:46. Middleton had breakthrough years in 2017 and 2018. The Canadian-American citizen ran the Toronto Waterfront Marathon in the time of 2:32:09 in her debut at the distance. Until 2018, the Canadian record was 2:28:00 – it was a great performance.

“I am pretty happy with how the race went. We went out so fast with a 2:59 first kilometre, and then Natasha took off from there. She is so tough,” said Middleton. “Malindi (Elmore) and I settled in a bit and really worked together.”

Wodak told the girls that she would be going out fast. She did; the tactic paid off.

Middleton and Wodak will be looking to go sub-31:50 at the Payton Jordan Invitational to qualify for the IAAF World Track and Field Championships taking place in Doha, Qatar starting Sept. 27. The standard is tough and will only get tougher for the 2020 Olympic Games when athletes will need to take 16 seconds off of Wodak’s national record to run a sub-31:25 – or at least make sure that they are globally ranked in the top-27.

Rachel Cliff of Vancouver, who bettered that 2:28 marathon twice including a 2:26:56 in March, will also toe-the-line at Stanford – it will be an exciting race for Canadian running fans.

The third place finisher Sunday was Malindi Elmore of Kelowna. The 39-year-old mother of two boys, both under five-years of age, dropped ironman training, to simplify things a little and stick to running. Although no one is surprised that Elmore, who ran internationally for Canada, was in the mix, it was an impressive performance for the former 1500m/5,000m athlete. She did win in 2010 with a 33:06 performance.

Married to one of Canada’s all-time greats in middle-distance running, Graham Hood, the athletic family, keeps active. The four just toured around North America for four months. While on the road trip, Elmore ran her debut standalone marathon in the time of 2:32:14 in Houston in January.

Asked if she is committed to the marathon going forward, she said, “yes, I guess so,” laughing. Running is so much simpler and takes less time than training also in the water and on the bike.”

Asked about her fall marathon plans she isn’t sure which race to do at this time. Maybe Chicago, maybe Toronto.

“I will do a summer of training and see how it goes, but I hope to do one of those races.”

Dayna Pidhoresky, fresh off of her second place finish at the Around the Bay 30K in Hamilton, March 31, finished fourth in 33:27. She may not have the fresh legs she needed to contend for the win, but all four runners have 10K road personal bests that are within seconds of each other.

The first master was Michael Gill of Oakville, ON. He finished in the time of 31:24. The first women’s master was Kelowna’s Christy Lovig in 36:45.