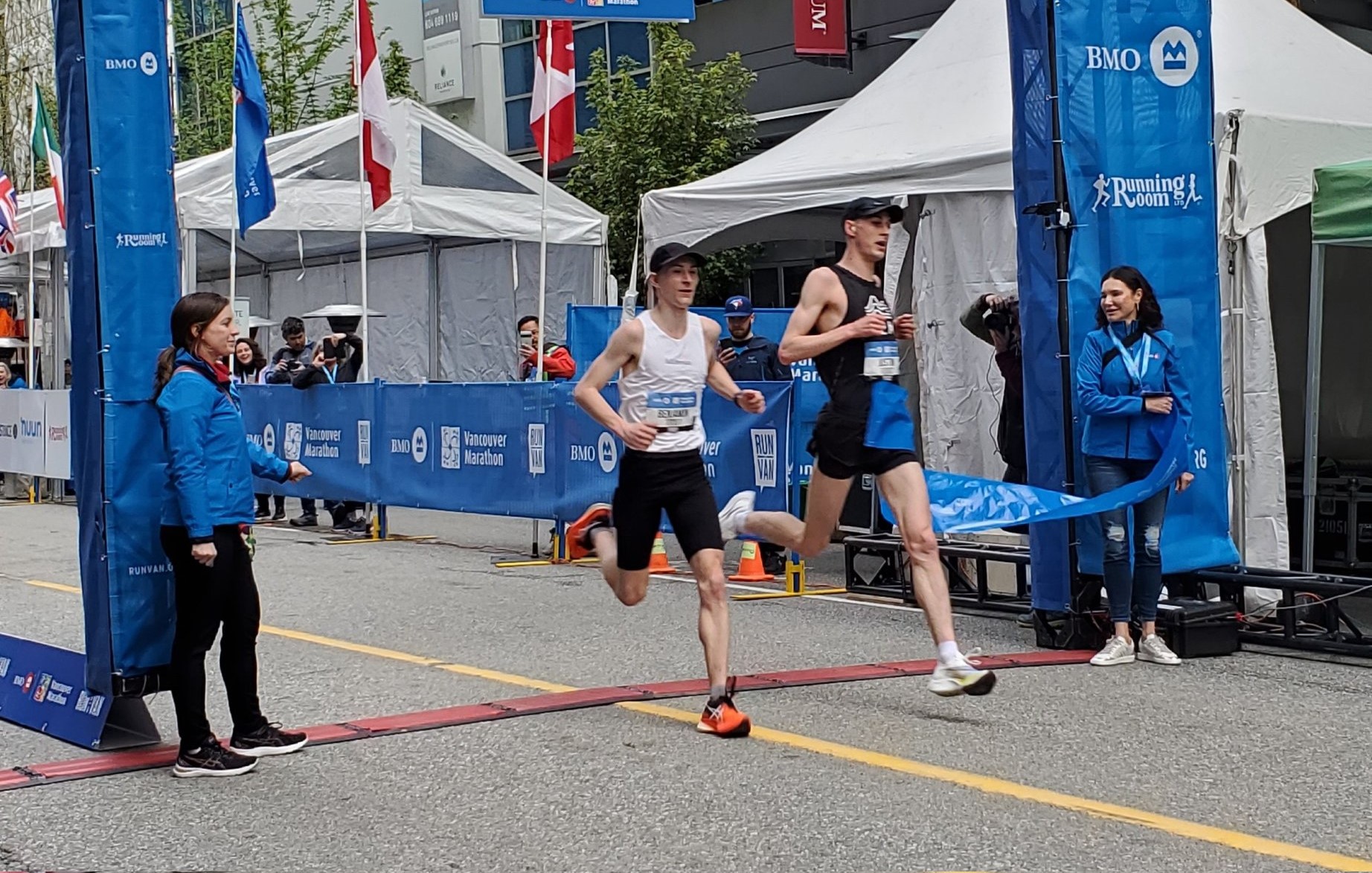 Justin Kent and Ben Preisner ran to a tie at the BMO Vancouver Half Marathon on Sunday, May 1. Meanwhile, Leslie Sexton took the win in the women’s race. For the three it was about running at marathon pace.

Kent of nearby Surrey clocked a finish time of one hour, four minutes, and 54 seconds as did Oakville, ON native Preisner. Kent is listed in the results as finishing first, but they were given the tie. Finishing third was North Vancouver’s Nathan Dehghan who clocked the time of 67:46. The top master (40-44) is former Ethiopian — now a Victoria resident — Teferi Kebede Balcha who finished sixth in the time of 68:39. Balcha is coming off a win at the 2022 TC10K in Victoria in the time of 31:02.

The two are running the Ottawa Marathon at the end of May. For Kent, he is just looking “for a solid performance, with no time expectations.”

“The race went as planned,” shared Preisner. “The goal was for Justin and I was to get in a solid but in control effort and simulate the beginning of a marathon.”

There were delays to the start of the races, as police were concerned about a potential bomb on the course. The bomb squad was brought in and blew up the suspected package, however, it was a false alarm.

“The hour delay was definitely a bit weird to deal with, but happy that we were still able to get in a good effort.”

Leslie Sexton of Kingston, ON, now Vancouver, won in the time of 74:56 and placed 13th overall. Her best over the distance is 73:13 from 2013 in Columbus, OH. Sexton, since moving to the coast, has run a new personal best in the marathon at 2:28:35 in Nov. 2021 at the Philadelphia Marathon. This performance puts her in the running to represent Canada at the World Athletics Championships happening this summer in Eugene, Oregon. The qualifying time is 2:29:30 for the women and 2:11:30 for the men.

“Yes, conditions were very good today,” shared Sexton when asked about the weather. “I’m happy with how the race went, I was coming off of the Sun Run last week and did this race as a workout at marathon effort. I had 1:15 in mind as a target pace given the course and my current fitness, so I’m pleased that I hit the goal pretty much right on.”

Sexton’s coach Steve Weiler has a series of marathon-specific workouts planned and Vancouver was one of them; check.

“I will run the marathon at the World Athletics Championships in July if I am selected. I ran the standard last fall but will have to wait until the end of the qualifying period (end of May) to know for sure if I am on the team.”

Vancouver’s Dayna Pidhoresky took the win, stopping the clock at 2:34:30. London, ON native Lanni Marchant, former national record holder at 2:28:00 continued her impressive comeback from hip surgery taking second in the time of 2:36:42. Toronto’s Rachel Hannah took third in the time of 2:43:40.

Balestrini seems to have recovered well from his Rotterdam Marathon performance from April 10 where he clocked a 2:18:15 personal best time. To run a marathon three weeks later and win is impressive.

For Pidhoresky, she has bounced back well after a rough ordeal in Sapporo, where she was isolated in her hotel room for her entire stay leading up to the Tokyo Olympic Marathon. Apparently, someone on her flight had covid. She had no chance to run. The day was hot with a high of 34. She toughed out a rough day and finished, but last in the field.