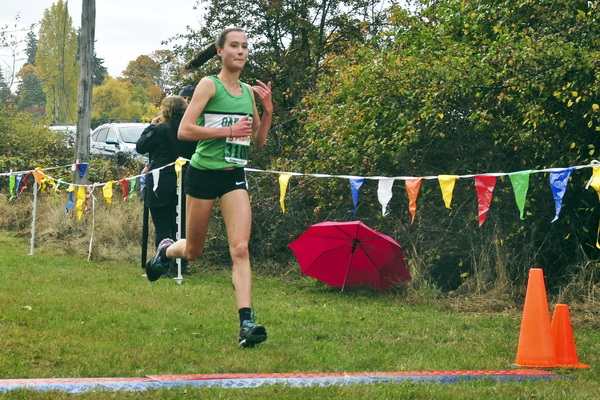 If she hasn’t yet, Victoria, BC’s Justine Stecko will be turning recruiter’s heads sometime this (Grade 12) year while competing for Oak Bay High School.

She was injured during her outdoor season in 2016. After a period of recovery and a summer of solid training, she appears to be rounding into form and should be a threat this cross-country season.

On Sunday, Oct. 8 during the GoodLife Fitness Victoria 8K, she finished second to veteran Lindsay Carson of Burnaby, BC – the four-time winner of the event. They finished in 27:26 and 27:38 respectively. It was a big jump in performance. In January, she raced the Pioneer 8K and finished in a disappointing 31:02. Regardless, the difference is three and a half minutes.

Wednesday, Oct. 25, she appeared to jog the Vancouver Island High School Cross Country Championships and won convincingly. She finished with a 36-second margin.

She was saving something for her provincial club championships which will be happening three days later on Saturday, Oct 28 in Abbotsford, BC. How relaxed she was in the race is up for debate. Her coach, two-time Olympian Bruce Deacon thought she looked effortless.

“She looked like she was jogging the race,” said Deacon.

Modestly, she suggested it wasn’t that easy. “We wanted the points for the team (Oak Bay High School), so I didn’t take it too easy, but yes I saved a bit for BC Club Championships this weekend,” said Stecko.

Oak Bay, a perennial winner of the island zone championships, is also a provincial threat every year. In 2016 Tyler Dozzi, (also a Deacon-coached athlete) went on to win both the BC High School Championships as well as the national youth title in Kingston, Ontario. Dozzi is now a University of British Columbia Thunderbird.

Oak Bay’s Findlay Day also won taking the senior boys race on Wednesday (yet another Deacon-coached athlete), although he was pushed to the finish and won by just two seconds.

With Stecko missing the Grade 11 outdoor season, it put a delay in the awareness of her ability with universities south of the border, however, she is currently talking to a couple unnamed schools; it’s early. Over the next three weeks, her stock may just rise with recruiters throughout U Sport and the NCAA.

Nov. 25 she will be competing in the national club championships in Kingston, Ontario. The meet can be streamed live at AthleticsCanada.tv.