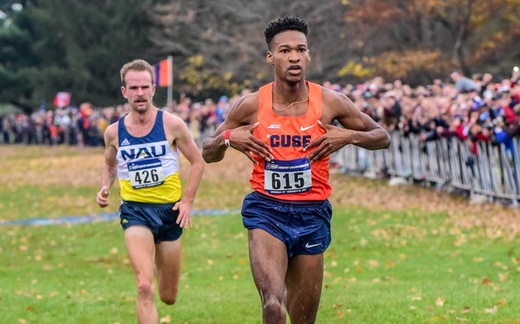 The meet took place Sunday, Nov. 18 at Tom Sawyer State Park and was hosted by the University of Louisville in Louisville, Kentucky.

Knight ran in a pack that was whittled down to three for the final two-kilometre lap, then let fly a punishing finishing kick over the final kilometre to take down his first individual title as well as the first ever cross-country win for Syracuse.

The Syracuse Orangemen athlete finished top-five in several different NCAA Championships, this is his first ever win.

Knight told the Cuse.com “Every single experience helped me get through this race today. “Freshman year when I got 143rd, I really cramped up bad. I fell back and gave up. I used that experience today when I started cramping up.

“My sophomore year when Edward Cheserek and Patrick Tiernan pulled away from me, I let them go and tried to stay back in my comfort zone. That kind of came back to help me over here. Last year, with Tiernan, I tried to keep the gap as close as possible, but toward the finish I let him go a little bit more. I brought that experience over here. Every single year that I’ve experienced NCAA Championships it all molded together in creating this championship.”

The Northeast Region athlete of the year finished second at the NCAA 3,000m championships, running a big personal best of 7:56.21 at College Station, Texas. He had won his conference two weeks prior finishing in 8:05.05.

Two months later he finished third in the NCAA 5,000m outdoor championships clocking a 14:36.23, it was a more tactical race than his conference final, where he finished in the time of 14:13.64. Three weeks before on May 5 at the Payton Jordan Invitational – a notoriously fast meet – he set his personal best of 13:17.51 – one of the fastest times in Canadian history. It was the fastest 5,000m performance in the world for 2017 to that date.

Knight finished less than seven seconds behind first-place finisher Muktar Edris at the 2017 IAAF World Track and Field Championships in June of this year. He finished the race in the time of 13:39.15. Edris cross the line first in the time of 13:32.22.

Mo Farah of Great Britain was exactly one second back of Edris; 20-year-old Knight has competed well at the highest possible level.