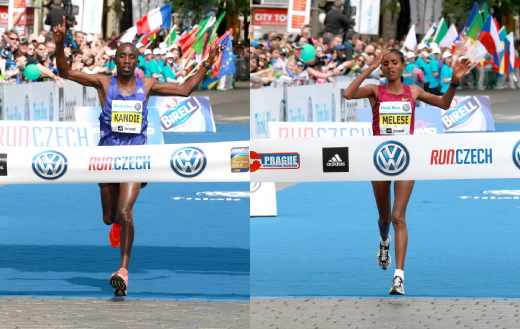 Felix Kandie might well not have made it to the start line of the Volkswagen Prague Marathon on Sunday morning, feeling the effects of a sore throat. But he decided to give it a go and his resolution paid off handsomely. “I wanted to see how far I could get,” said Kandie. In the end, he went to the limit in the Czech capital. Coming from behind he took his second marathon win in a succession with another personal best. The 27 year-old improved to 2:08:32 in the Volkswagen Prague Marathon. Last November Kandie showed his strength to set a 2:10:37 course record in the Athens Marathon. Fellow-Kenyan Evans Chebet was runner-up for the second consecutive year with 2:08:50, followed by Ethiopia’s Deribe Robi, who finished in 2:09:05.

Yebrgual Melese of Ethiopia clocked a fine 2:23:49 to take the women’s race in Prague. It is the third fastest winning time in the history of the race that was first started in 1995. Portugal’s Sara Moreira took second in her second marathon race with a personal best of 2:24:49, improving on her debut in New York last November by over a minute. Letebrhan Haylay of Ethiopia was third with 2:25:24.

It might have helped Felix Kandie that the pace in the men’s race was much slower than planned despite very good weather conditions. Kenyan pacemaker Benjamin Ngandu was supposed to pass through half way in just unter 63 minutes and he tried his best. However the group of favourites did not follow him. Ngandu was running 30 to 40 metres ahead of the first group. It was Hillary Kipchumba who then was on the heels of Ngandu and the pair reached half way in 64:00. While Ngandu dropped out after 27 k Evans Chebet moved up to Kipchumba. When they reached 30 k in 1:30:29 they were 22 seconds ahead of a chasing group of four with Kenyans Felix Kandie and Geoffrey Ronoh as well as Ethiopians Fikre Assefa and Deribe Robi. When last year’s runner-up Chebet surged ahead with ten kilometres to go this looked like the decisive moment in the battle for victory.

But then it was Kandie time in Prague. Breaking up the chasing group with a surge the Kenyan covered the 5 k section from 30 to 35 in 14:54. That propelled him within two seconds of the leader Chebet at 35 k. And it was soon after that he overtook the fellow Kenyan and built a big lead. “I felt tired at around 39 k so I just made sure that I would win,” said Kandie, the man who had broken the course record of Italy’s 2004 Olympic Champion Stefano Baldini in Athens last year.

With a time of 2:08:32 Kandie was 18 seconds ahead of Evans Chebet, who was not disappointed on missing out on victory for a second time in a row. “I had a leg problem in the build up to the race. So this time I am really happy with the second place. Hopefully I can finally achieve victory next year,” said Chebet. Behind Ethiopians Deribe Robi and Fikre Assefa, who ran 2:09:05 and 2:10:01 respectively, Geoffrey Ronoh finished fifth with 2:10:52. The Kenyan improved by almost five minutes. He had hoped for a much faster time though and was on course for that when he ran in third place after 35 k. But during the final section Ronoh tired and lost a lot of ground.

In contrast to the men’s event the women’s race was much faster during the first half. It was Kenya’s Janet Rono who stormed away with her pacemaker soon after the start. Passing 10 k in 33:45 she was on course for a sub 2:23 time. Sara Moreira followed in second with 34:08 and another 16 seconds back there was the big group with all the Ethiopian contenders. There was no change of this order at half way (71:43), but Rono began to slow and the Ethiopians were starting to close the gaps.

When Moreira was caught she managed to hang on, but once the group reached Rono the Kenyan was quickly dropped. They then passed 30 k in 1:42:53 and Moreira was the only non-Ethiopian left in the leading group, running besides Yebrgual Melese, Tadelech Bekele, Haylay Letebrhan and Ashete Bekere. Bekele and Bekere could not hold on much longer. And when 25 year-old Melese, who won this year’s Houston Marathon in January with a personal best of 2:23:23, surged the small group broke up. Melese looked very strong in the final five kilometres and finished in 2:23:49, exactly one minute ahead of Moreira. Haylay followed in third with 2:25:24 while Rono managed to secure fourth place in 2:26:31. With six runners finishing inside 2:28 the race had a very good depth. Only Dubai, London and Paris had more runners inside this time this year.

“It was my plan to save some energy for the second half. This is why I chose a more careful approach and did not start that fast,” said Yebrgual Melese. Second placed Sara Moreira was more than happy with her performance. “I had a leg injury so I could not run London. I was looking for another opportunity and was happy to get the chance to run Prague,” said Sara Moreira, who ran her marathon debut in New York last November, finishing third in 2:26:00. 29 year-old Moreira looks capable of finally breaking Rosa Mota’s 30 year-old Portugese record of 2:23:29, set in finishing third in Chicago.