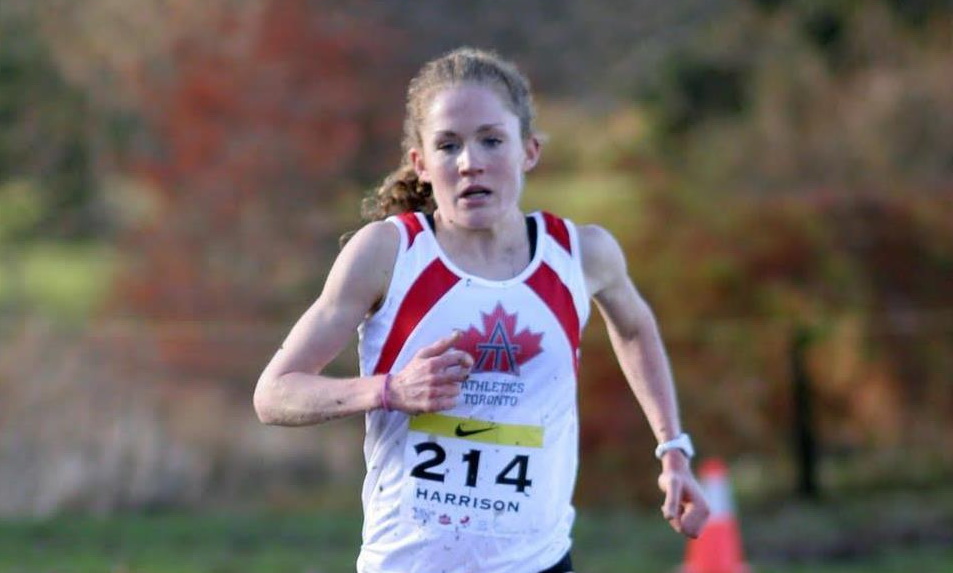 Twenty-three year old Kate Harrison of Toronto, Ontario, graduated from NCAA Division 1 West Virginia University in 2012 with a Bachelor of Science degree, majoring in Exercise Physiology. She competed as a U of WV Mountaineer for three years after having red-shirted the 2008 indoor and outdoor seasons. Harrison was named first team All-American after placing second at the 2011 NCAA Championships. She finished first at the NCAA East Regional in the 10000m earning a personal-best time of 33:48.64.

In Vancouver, BC on November 24th Harrison raced to a surprise second place finish in the Canadian Cross Country Championships behind race favourite Megan Brown. Her placing was a surprise as she suffered with a bout of anemia during the spring and summer of 2012 and entered the nationals without expectations. She continues to live and train in West Virginia under coach Sean Cleary.

CK: I know we talked about how you discovered that you were getting faster as a teen and that helped form your decision to move towards serious running. Was that around an Ontario Provincial Championships (OFSAA)?

KH: I played hockey through grade nine and ran just for fun and to stay in shape that first year. I really wanted to play for Team Canada. I think it’s the same story with a lot of Canadian runners. You grow up in the hype of NHL and Olympic Hockey, but when your teammates all sprout up a foot taller than you, you realize it just wasn’t meant to be. But I ended up finishing 5th and 6th at OFSAA and realized I had a lot more potential in running.

CK: Now you want to explore road running a little more, what does cross-country mean to you in your overall or annual training plan?

KH: Cross-country is something you do every year throughout your high school and college career. I’ve grown to love the variety and the new challenges cross-country brings. It gets boring running in circles all the time! I also like the idea of a season where everyone competes in one race, and the best from all distance specialties go head to head. I will definitely continue to include cross-country in my racing schedule in years to come.

CK: So your career choice at this time looks like physiology. Would you return to Toronto to practice if that is your choice or stay in West Virginia?

KH: Yes, I am definitely a nerd when it comes to science and running. I love studying and learning about the physiology behind human performance and how we can push our limits. In order to train with my current coach, I plan on staying in West Virginia for my running career, after that I’m not sure where I’ll end up. Wherever opportunities present themselves.

CK: You are running the Houston Chevron Half Marathon?

KH: This is a race my coach and I discussed before the fall season started. I am excited about the possibility of moving to the marathon distance and I think it would be a great experience to get a taste of the road-running scene. I’ll have to sit down with Sean again and re-evaluate though, as I am just coming off a rough fall where I didn’t get in the training I would have hoped leading into a big race like that. I also would like to run on the Canadian cross-country team in Jamaica (NACAC) and Poland (Worlds), and there is only so much you can fit into one winter!

CK: Do you have any specific goal times for Houston, if you do it?

KH: Whether in Houston or at a later road race, I would definitely be there to put down a good result. However, since I am new to road racing and the longer distances, it’s hard to give an exact time. I think I would definitely want to be under the 1:15 mark though.

CK: Why the interest in the longer distances?

KH: I perform better at longer distances. I guess I am more aerobically talented than anaerobic and I really enjoy the longer distance training. Coach Cleary is a distance-based coach, which works well for me. I like that he treats each athlete as an individual, so there is no set plan for everyone.

KH:Yes. I have goals of moving up at some point, but my personal b

ests on the track are pretty soft, and we feel like I need to get those down before I can expect to compete at the highest level in the marathon.

CK: If you are, are the 2013 IAAF World Track and Field Championships on your radar?

KH: They sure are. Realizing that my current 10k time is a minute and a half slower than even the B standard, it definitely seems like a long shot, but I think I have a ton of room to improve there so I’ll see what I can do. As a post-collegiate athlete now I feel like if you’re not aiming for those major championships than what’s the point?