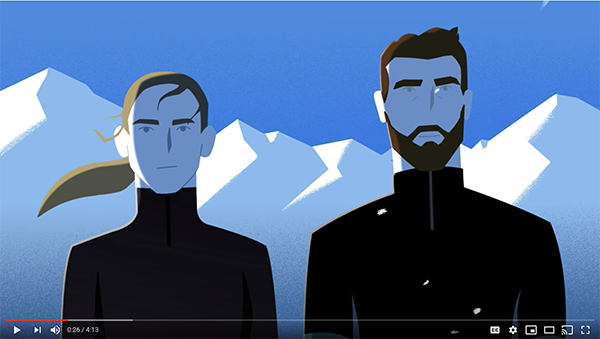 On July 19th this year, partners Katie Schide and Germain Grangier left Cervina in Italy on an epic journey, knowing their ultimate challenge would command a deep understanding and utmost respect for the mountainous terrain and expansive glaciers they would encounter over the following four-and-a-half days of gruelling exploration across one of the highest mountain ranges in the world.

With more than 42 hours in the mountains, traveling over 188 kilometers and accumulating approximately 15,000 meters of elevation over two summits over 4,000m, the iconic ultra athletes and champion trail running duo can now add this epic adventure in the Alps to their growing bucket list-worthy series of adventures completed. This gallant expedition and compelling paradox between two people in love with each other and with the mountains is depicted in a new short animated film entitled “Taming Giants” produced by On, Studio AKA and creative director, Simon Brotherson, released at on-running.com/taming-giants. As the first animated production by the Swiss sportswear company, the imaginative film tells the tale of adoration and respect for nature—a force that cannot be conquered—where giants watch over those who dare to enter its kingdom with challenging eyes.

“This has become the ultimate adventure, resulting in a mammoth achievement by two of the most determined ultra athletes in the world,” says Feliciano Robayna, Head of Sports Marketing at On. “Katie and Germain have a deep respect and understanding of mountain landscapes, having both studied geology, and the nature that surrounds them. The time devoted to preparing and planning their journey shows the enduring commitment they have towards accomplishing each project with extreme efficiency. We have commissioned a creative adaptation of their story into our own version of events through imaginative animation—our first production of its kind.  Taming Giants is also a film about two talented and competitive athletes, doing what they do best, challenging themselves and pushing their ability to the absolute limits.”

As elite athletes in the world of trail running (both top ten UTMB contenders in 2019) Katie and Germain were eager to combine mountaineering with their love for trail running. Their latest project had been in development for some time, requiring several months of logistical planning and preparaton. But as any climber will tell you, while breathtakingly beautiful and awe inspiring, mountains can also be cruel and unforgiving, unless you treat nature’s most arduous landscape with reverence, whereby it will offer kindness and passage in return.

Setting out at dawn on Sunday, July 19 in Cervinia, Italy, Katie and Germain began their journey by climbing the Breithorn, a summit over 4,000m on the border between Switzerland and Italy. After spending the night at the beautiful Schönbielhütte (Schönbiel Hut), they departed for a 120km passage on the famous Glacier Haute Route, stretching from Zermatt in Switzerland to Chamonix in France. Forced to take refuge from the weather in Chamonix, they completed their trip the next day, by climbing the Mont Blanc in less than 12 hours. Here is a timeline of their remarkable experience.

On Sunday, July 19th at 5:00 am, Katie and Germain left Cervinia in Italy to reach the summit of the Breithorn (4,164m). They arrived at the crack of dawn before descending towards Zermatt in Switzerland and eventually reaching Schönbielhütte, the final stop for day one, allowing for cooler temperatures and safe passage across the upcoming glaciers the next morning A total of 35 kilometres and 2,700 meters of elevation was completed in just six hours.

On Monday, July 20th at 5:20 am, Katie and Germain left Schönbielhütte in Switzerland to run the reverse course of the Glacier Haute Route, crossing glaciers and high mountain passes from Zermatt, reaching Les Houches near Chamonix. They could move quickly thanks to cold nights that froze the snow for safe running conditions. After their initial crossing of the renowned Stockji glacier, the day continued with five more glacier crossings before hitting the final challenge: the 8km Otemma glacier. After taking much-needed breaks on their journey, Katie and Germain continued the 115km route by running through the night. Arriving 24 hours later at the fog-covered Col Supérieur du Tour above Trient, they eventually arrived at the bottom of Mont Blanc in Les Houches, midday on Tuesday, July 21st. Stage Two ended with a total of 115 kilometres and 7,000 meters of elevation accomplished in 24 hours.

For the final stage, Katie and Germain return to mountaineering with the ascent of the Mont Blanc via the normal route through the Col de Goûter. After spending Wednesday in Les Houches because of bad weather conditions, Katie and Germain rested while waiting for the ideal weather window. On Thursday, July 23rd at 2:00 am, they left Les Houches for the majestic Mont Blanc—a 33km route that brought them to the summit after 4,000m of climbing. Summitting and descending Mont Blanc in one day is an incredible feat, as the highest mountain in western Europe, normally completed over two or three days and often assisted by train for the first 1000 metres. Katie and Germain completed the two-way expedition in under 12 hours, arriving back in Les Houches after just 11 hours and 30 minutes, completing the last stage of their extraordinary adventure through the mountains.

“It’s a few days of enjoying lots of time outdoors, listening to the mountains, testing our limits, gauging risk, and constantly adapting in the moment,” says Germain. “We share adventures in the high mountains to explore new summits, ridges, valleys, and glaciers as a simple endurance challenge. It’s what we live for.”

“With most of the events cancelled this year, this project was a good opportunity to go back to the roots of what we love most: spending long days moving through the mountains,” says Katie.

For further insight into the story of Katie and Germain’s adventure across the Alps and to watch the release of Taming Giants, visit on-running.com/taming-giants.