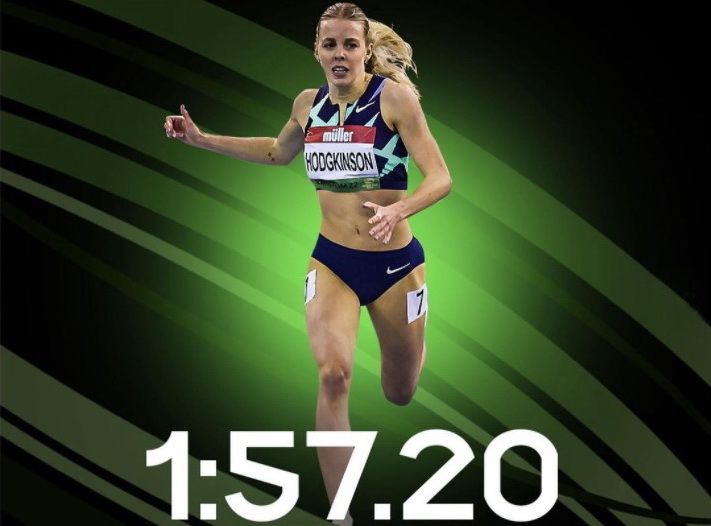 The best was saved until last in Birmingham on Saturday, February 19 as a pulsating Müller Indoor Grand Prix came to a record-breaking end.

The full house at the Utilita Arena Birmingham roared virtually every step of Keely Hodgkinson’s 800m victory, as the Olympic silver medallist began her competitive year with a run of the highest quality in what was the final track event of the meeting.

Seeing off a top-class field, the 19-year-old (coach: Trevor Painter, club: Leigh Harriers) stormed to a time 1:57.20 – not only a British indoor record but also the fastest indoor 800m performance by a woman in 20 years. If this is a measure of how she intends to go on in 2022, it will be a special year indeed for the woman who only celebrates her 20th birthday next month.

Her margin of victory was over two seconds, with Australian Catriona Bisset also clocking a national record (1:59.46) while Jamaican Natoye Goule, who had been the world leader going into this event, ran 1:59.85. Adelle Tracey (Craig Winrow, Guildford, and Godalming) clocked 2:01.52 for fifth, with Jenny Selman (Fife) sixth in 2:01.57.

“I wrote down the aims for this year and one of them was a British indoor record,’ grinned Hodgkinson. “I was 100 per cent in shape for this record and I just wanted to go for it and there were some good girls in that race.

“I’ve never run in front of a British crowd this big and it was such a comfortable environment.”

Another British performance to really grab the attention was the European U20 indoor record-breaking 400m produced by Ed Faulds (James Wright, Rugby & Northampton). The European U20 champion’s strong finish saw him surge through to clock 46.16 as he came home in third behind Kahmari Montgomery’s 45.72 and Liemarvin Bonevacia’s 46.08.

“This crowd is a bit of me. I love it here and I will be coming back again”

There was more home success for the crowd to celebrate as local athlete Isabelle Boffey (Luke Gunn, University of Birmingham) produced an excellent win in the women’s 1000m.

Jemma Reekie (Andy Young, Kilbarchan), the Olympic 800m fourth placer, was firmly at the head of affairs for much of the race but after some particularly sharp early pacing, the lactic kicked in and she was caught by the chasing pack. Boffey, the European U23 800m champion, seized her chance to win in a PB of 2:38.25, just ahead of Pole Angelika Cichoka’s PB of 2:38.57. German Katharina Trost was third in 2:38.62, while Reekie finished sixth in 2:39.74.

Jessie Knight (Marina Armstrong, Windsor Slough Eton and Hounslow) was the sole British athlete involved in the women’s 400m and finished fifth with a time of 52.35, with Jamaican Stephenie Ann McPherson taking victory in a PB of 51.39.

There had been much anticipation surrounding the men’s 1500m, with Peter Elliott’s British indoor record of 3:34.20 expected to come under threat. The 1990 mark survived, though, with the first Briton over the line being George Mills (Brighton Phoenix), who clocked a significant PB of 3:36.03 in fourth. Piers Copeland (Bob Smith, Pontypridd) also clocked an indoor PB of 3:36.12 for fifth in a race won by Kenyan Abel Kipsang in 3:34.57.

In the women’s 1500m race, there were PBs and World Indoor Championships qualifying marks for Amy-Eloise Markovc (Wakefield) and Erin Wallace (Andy Young, Giffnock North) of 4:08.68 and 4:08.90 in fourth and fifth place respectively.

In the men’s 800m, Elliot Giles (Jon Bigg, Birchfield Harriers) was just denied victory by Collins Kipruto, the Kenyan clocking 1:45.39 to edge the Briton (1:45.42). Guy Learmonth (Lasswade) was fourth in 1:46.46, a time which is also a World Indoors qualifier.

American world record-holder Grant Holloway’s domination of the 60m hurdles continued as he stormed to victory in 7.41, but there were encouraging performances from world indoor champion Andrew Pozzi (Stratford-Upon-Avon), who ran a season’s best of 7.59 for second, while fellow Briton David King (Tim O’Neil, City of Plymouth) produced a PB of 7.63 in fifth.

Multi-eventer Holly Mills (Laura Turner-Alleyne, Andover) was sixth with 8.24 in the women’s race, with Netherlands’ Zoe Sedney winning in 8.02.

As expected, Jamaica’s 100m and 200m champion Elaine Thompson-Herah won the women’s 60m, in a time of 7.08 but there was a brilliant PB of 7.11 in second for Tokyo finalist Daryll Neita (Cambridge), while Amy Hunt (Joe McDonnell, Charnwood) was hampered by an injury on her way to seventh in 7.64.

The first field event of the day saw Laura Zialor (Jade Surman, Marshall Milton Keynes) produce a brilliant PB of 1.91m as she matched Olympic champion Mariya Lasitskene, with the pair tied for second. The event was won by Australian Eleanor Patterson with 1.97m, while Emily Borthwick was fifth in 1.84m.

In the final event of the day, which saw Mondo Duplantis achieve a world-leading pole vault clearance of 6.05m and come incredibly closer to a world record of 6.19m. Elsewhere, Harry Coppell (Scott Simpson, Wigan and District) was seventh in 5.31m.