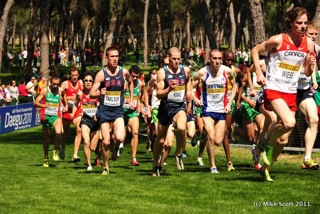 to a 7th place finish overall.

Christopher Kelsall: You are CIS National Cross Country Champion. Did you go into the race with the win as your major goal?

Kelly Wiebe: Yes, It has been my goal over the past two CIS championships (to win the gold), but this year I knew that I had my best shot at winning, given my fitness and the way that training has been going over the past several months. Time is never a factor for me in cross-country, so the main goal was definitely to come out on top.

CK: What has been different about your training this year to allow you to go for the win?

KW: Nothing! That’s the thing about running. It’s not necessarily big changes that you make that allow you to go to the next level (in my opinion), it’s just being consistent. Running requires a lot of patience, and that is something I had to learn the hard way. In the past, I was one of those guys that needed instant gratification. I have finally learned that the best way get better is to stay healthy, and just keep grinding away. It is only after years of hard work when you actually see the benefits. There have been small changes in mileage, and maybe a few changes in my workouts, but the main thing for me was to recover better, be smarter, stay hungry, and stay healthy!

CK: What does your win mean to your chances at nationals?

KW: Winning the CIS championships, especially given the way that I won (solo) definitely gives me confidence going into the national championships. Nationals however is a different beast than the CIS championships. With Cam (Levins) and Mo (Ahmed) running this year, it’s going to take one of my best races to finish in the top three. I love the National meet. I seem to get the most excited about running it, and I can’t wait to toe the line on November 24th!

CK: Aiming for the win there too?

KW: Always aiming for the win. If you’re not aiming for the win then you have already been defeated. I know that Cam and Mo have credentials that put mine to shame, but if you don’t strive to be the best then you will never get there.

CK: This will be a different experience, instead of leading throughout as you did at CIS, I assume your plan will be to hang with Ahmed and Levins and whoever else may be with them be it (Chris) Winter or (Kevin) Friesen until you are well into the final 2k lap, yes?

KW: To be honest I never really go into races with a definite race plan. So much can change when you actually get going that race plans often just get thrown out the window anyway. I plan on going out hard, running hard throughout, and finishing really hard! Whatever happens happens.

CK: Mo Ahmed won a regional meet for the Badgers on the same weekend that you won CIS, with roughly the same finishing time. Do you know how the CIS course compares to the NCAA course?

KW: Well I am not sure exactly, but I know that Canadian cross-country courses tend to be more technical than NCAA courses. There are obviously exceptions, but the NCAA course (going off of Indiana’s course last year) is flat and fast. The CIS course in London this year had some very hilly sections, with lots of turns. I don’t like comparing times from different courses because it is just too hard to compare. I know Mo is a great runner, and he will be in amazing shape come Nationals. I am excited to be racing him!

CK: Do you think that because Cam has run some pretty high mileage, while coming back from illness and at the same time Mo threw down that win, that the Mo and Cam show might be closer than many expect?

KW: First things first…never underestimate Cam Levins. I have developed a pretty good relationship with the dude over the years, and one of the things I have noticed most about the guy is that he has an unparalleled, deep-seeded desire to do whatever it takes to win. Two years ago at World Cross in Spain I passed Cam with roughly 200 meters to go. I looked into his eyes when I past him and it looked like he was going to kill someone. He blew by me like a bat out of hell and beat me by three seconds. After the race he said to me that he thought I was going to beat him, I politely responded by saying a few terrible things. Mo is a great runner as well; I mean the dude threw down at t 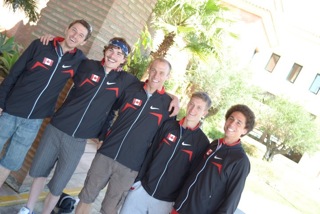 he OLYMPICS. I have a lot of respect for both of them, but Cam Levins man…I don’t know what to say, I guess it will be as close as Cam wants it to be.

CK: How does your Vancouver Sun Run 10k win in 29:12 compare to your CIS Cross Country win? What were your expectations going into the Sun Run?

KW: I think my Sun Run win was a better performance on the basis of running above my potential given my fitness. Going into the Sun Run, I literally was just coming off of a break and just doing easy running. I had no expectations going into the race; I just wanted to hang with the boys up front for as long as I could. My competitiveness and desire to win were the only things keeping me in that race. When I am really motivated to race, I can somehow dig deeper than I even knew was possible. So, I guess the Sun Run win was more impressive from that standpoint, but the CIS win meant more to me because it was something that was hovering over me for a LONG time. It was getting to the point where I was just getting annoyed. I felt that if I didn’t win CIS I couldn’t really feel satisfied with my collegiate career. It was a huge relief and very satisfying.

CK: What or who got you into running in Regina. Was Bairu an inspiration?

KW: To be honest, I never even knew who Simon was until a few years into running. That was mainly because I didn’t really like running until about my third year of doing it. I just ran because my high school phys-ed teacher (who was also the cross-country coach) forced me to come to practice (there may have been a few good looking girls there too).

Ted Jaleta was the man that convinced me to come run for the Cougars in Regina. If you are a runner, and you don’t know who Ted Jaleta is, I recommend you Google him immediately. The guy is an inspiration for me. The struggle he went through to get from Ethiopia to Canada is just insane! He would have been an Olympian for sure if he never wasted his prime running years fighting for his survival.

Simon Bairu has also acted as a huge role model for me over the years. The dude is a class act. I spent one summer training with Simon, and it was awesome. Solid guy, solid runner, definitely an inspiration for me and many others in Regina!

CK: So what motivating factor is there for AC nationals, can the same desire exist for November 24th as CIS Nationals?

KW: I will never have a problem getting motivated for AC nationals. The combination of the competition, the running atmosphere, and the comradery is just amazing. I believe that I was put on this earth to run cross-country. Striving to be the best in Canada and one of the best runners in the world is what gets me out the door each morning for a run. I want to be the best, and I know in order to be the best you have to beat the best, and that starts with the runners at Canadian Nationals. Plus of course, a weekend away from the harsh Regina climate is always a motivating factor on its own. I am just looking forward to not having to run in five layers of clothes for two days!