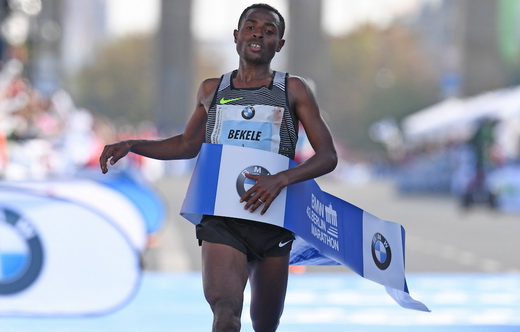 The BMW BERLIN-MARATHON will stage a unique contest on September 24: for the first time in the history of the event the top three marathon runners in the world will be on the start line as the Kenyan duo of Eliud Kipchoge and Wilson Kipsang take on Ethiopia’s Kenenisa Bekele. The BMW BERLIN-MARATHON is an Abbott World Marathon Majors (AWMM) event and an IAAF Gold Label Road Race.

Eliud Kipchoge’s avowed intention is to break the world marathon record of his compatriot Dennis Kimetto, which the latter achieved in Berlin in 2014 with his time of 2:02:57. Kichoge had a kind of “lab test” at the beginning of May when he ran 2:00:25, the fastest time ever for the marathon distance, on the Formula One circuit of Monza in Italy. But this feat was achieved with the help of a team of substitute pacemakers who also formed a wind shield from start to finish.

Under normal race conditions a maximum of three pacemakers is permitted and no substitutes are allowed. Kipchoge later commented: “In Monza I was so close to breaking the two-hour barrier. The BMW BERLIN-MARATHON represents for me the right opportunity to attack the official world record.” At the age of 32 Eliud Kipchoge can look back on a long and successful career as a long distance runner. He won the world 5,000m title in 2003, silver and bronze medals at the Olympic Games over the same distance in 2004 and 2008 respectively and is the reigning Olympic Marathon champion, thanks to his victory in Rio in 2016.

The greatest day in the 35-year-old Wilson Kipsang’s career so far was four years ago in the 40th edition of the BMW BERLIN-MARATHON when he took 15 seconds off the world record of his compatriot Patrick Makau’s time of 2:03:38. But Kipsang’s record of 2:03:23 stood as the world record for just 12 months: in 2014 Dennis Kimetto became the first man to run the marathon under three hours with his 2:02:57 on Berlin’s renowned fast course. That remains the world record. In 2016 Kipsang ran ten seconds faster than his world record in Berlin but it was only good enough for second place behind the Ethiopian Kenenisa Bekele. The Ethiopian set a 2:03:03 personal best in winning the title and missed the world record by a mere six seconds. Kipsang had pushed the pace during the second half of the race and didn’t have the strength to counter the fast-finishing Ethiopian over the last two kilometres. But last year’s race left Wilson Kipsang with the conviction that he still had another very fast marathon in his legs and he wants to prove that on September 24: “I am highly motivated and my preparation has been more meticulous than ever.”

Kenenisa Bekele went within six seconds of the world record last year on the Avenue of June 17 and did that despite suffering muscle problems several times during the second half of the race. He fought back from each bout of muscle cramp and turned his superior basic speed to winning effect at the finish.

The 35-year-old Ethiopian is the most successful long distance track runner in history. Three times Olympic champion and World champion on five occasions at 5 and 10,000m, he has also won 11 World Cross Country titles over the short and long distances. For good measure, he also holds the world records for 5 and 10,000m.

Mark Milde, race director of the BMW BERLIN-MARATHON since 1999 whose duties include recruiting the elite field, is delighted at this summit meeting of such distance running talent: “It’s a dream match-up. It’s not often that the three strongest marathon men in the world race each other. As organizers we are crossing our fingers for good weather and thrilling competition.”

Profiles of the the top stars